What he is right now is simply not working, and I think I can speak for everyone when I say Sami is a natural babyface. Him being a heel was interesting for a time, but once they shoved that feud with AJ Styles, Daniel Bryan and Shane McMahon down our throats, he became borderline irritating for a time. WWE only topped themselves by simply embarrassing him in one of the worst feuds in WWE history in the past couple of months with Bobby Lashley. Upon his return, he needs a shape-up in more ways than one. 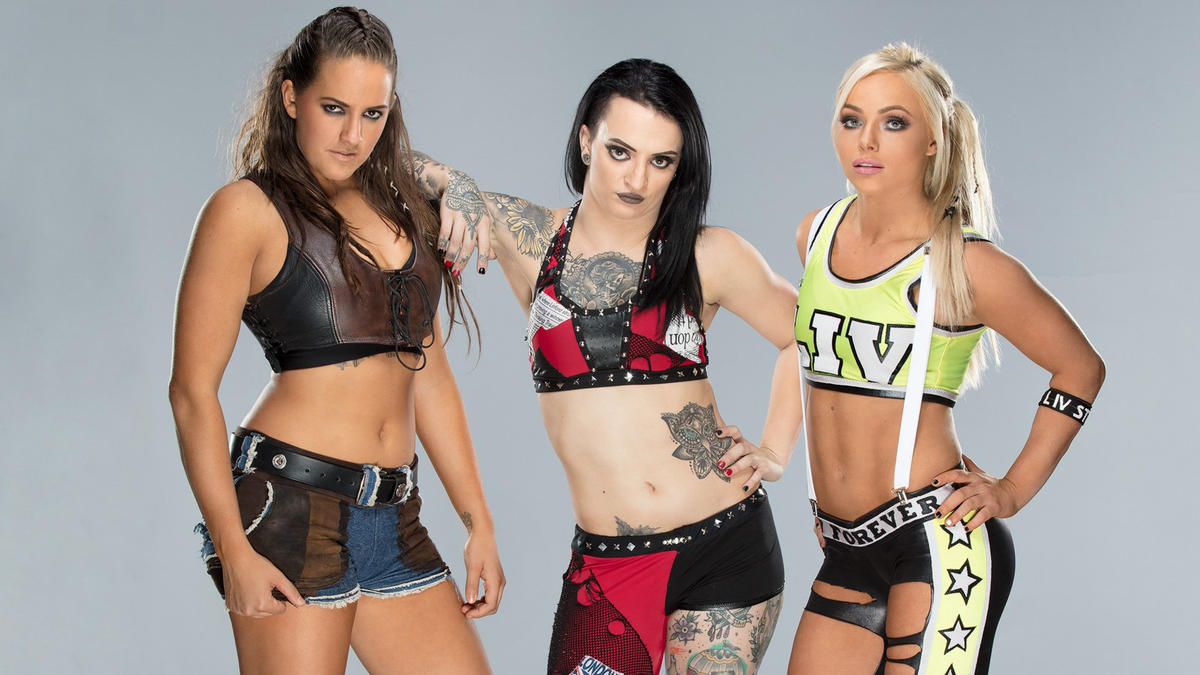 What do we know about the Riott Squad? They have generic WWE 2K stock music. There’s three of them. They like throwing things and making a big mess in a backstage area. But most importantly, what do we know? They haven’t accomplished anything. Yeah, they’ve won some matches here and there, but they haven’t really had any statement moments. I think the issue with them is that they really are in a holding pattern and extremely repetitive. VERY repetitive. It seems like all they do nowadays is capitalize on the never-ending feud that is Sasha and Bayley. Other than that, they haven’t established an identity outside of being what was originally supposed to be Smackdown’s version of Absolution. I think Ruby herself is an underrated worker, but factions only work if they have a clear purpose and have the accolades to back up the talk and the identity, and the bottom line is that in every big match situation, they’ve come up short. They can talk tough and they can throw their weight around all they please, but they won’t be anything of value until they actually start stepping up to the plate. I’d also like to see if we can develop the characters of Logan and Morgan more. They just seem sort of there. Kevin Owens is a former NXT Champion, 2-time Intercontinental Champion, 3-time United States Champion and the 2nd longest reigning Universal Champion in WWE history. There’s no reason why I should feel he’s just another ordinary guy on the roster. I really think the feud with Shane McMahon last fall derailed his character a great deal because he hasn’t reminded us why he’s a top talent in the industry. When he first came over to NXT, he was immediately impactful. He destroyed people left and right, powerbombing guest celebrities off the stage and defeated John Cena clean in his first match on the main roster. He was delivering on the mic, in the ring and had all the other intangibles to boot. But what is he now? Braun Strowman’s personal test dummy? He hasn’t done anything of note all year. The feud with Shane and Daniel was a colossal failure for him and he and Sami as a tag team proved to accomplish nothing.

Now back to his solo act, Kevin has just become another name on RAW that we are programmed to react to, and that shouldn’t be the case. Whatever happened to the cocky heel that backed up his tough talk? That would be a great asset to the roster, but unfortunately, he has become a shell of his former self. That’s why I believe Kevin especially could use a 1 or 2-month sabbatical. Let him unwind and reset and bring him back stronger than ever. I’d much rather have him off my television screen than playing the role of an average heel with no credentials. Sorry, but this guy just pisses me off every time I see him now. I guess this is mostly WWE creative’s fault for foolishly deciding to bring him up to the main roster as a face for no apparent reason. What makes you want to see the former NXT Champion every Monday nights and what does he do that is unique? He comes out in a nice, shiny robe like Ric Flair every week. His theme song is the same verse over and over. He likes saying glorious. His finish is a DDT. He’s Canadian. Happy yet? What made Bobby popular in NXT was that he was a fabulous heel, and he fit his persona greatly. He was a jerk, but we loved him being a jerk. But now that he’s a good guy, smiling for everybody, what is there to like about him? What makes him different than any other good guy on the roster. The crowd singing his theme song was great when it first became a thing everybody did, but now it’s grown quite cumbersome.

Roode can be a great asset if he’s used correctly, and if he’s used correctly that means Monday Night RAW gets another dynamic heel for top faces such as Roman Reigns and Seth Rollins to feud with. But as a lovable good guy whose selling point is one adjective makes him no more useful than Zack Ryder. I don’t even know who these people are anymore. Actually, their identity crisis has been an issue from the moment they came to WWE in 2016 as a tag team. We all knew from Japan that Luke Gallows and Karl Anderson were AJ Styles’ buddies, and when they paired alongside AJ in the summer of 2016, they looked like a pretty good insurance policy for AJ during his feud with Roman Reigns. But then, once AJ Styles went over to Smackdown to continue his singles career and left Gallows and Anderson on RAW, they subsequently became exposed.

The once dominant, powerful duo that dominated Japan just became two tattooed guys on the main roster who only won the tag team titles once, and that reign didn’t amount to anything. Now, they are on the blue brand with AJ, but after a recent failed run at the Smackdown Tag Titles, what are they really? If they’re not monster heels that dominate their opponents, they are just ordinary men. There’s nothing unique about them, there’s no gimmick to get behind, and without AJ, they consistently lack direction. What they need is a character change or just something different. Fast. It really pains me to see Becky on the main roster right now. Yes, she was Smackdown’s inaugural women’s champion. But do you remember her reign as champion? Probably not. And she lost it to Alexa Bliss, and look at the kind of push that she’s had since TLC 2016. Becky’s in-ring ability is right on par with the likes of Charlotte, Sasha Banks, and WWE’s top workhorses. I’ve personally been calling for a heel turn for Becky for the longest time now. Remember when Mark Henry turned heel in 2011, and he said that making people smile and being a nice guy didn’t get him anywhere, but when he became a bad guy, only caring about himself and his success, he won the World Heavyweight Championship that eluded him for his entire career? I think Becky could use something similar to that right now. What has being nice gotten her? A 2-month women’s title reign and being 2nd, 3rd fiddle on WWE’s 2nd show of importance?