Today, we’re looking at the product of All Elite Wrestling (AEW). After three shows (four if you include All In), it’s safe to say there’s been some teething problems.

Cutting AEW some slack is natural for anyone giving it a chance. Their goal? Is to take the world by storm. With firm backing, the sky is the limit for this young, fresh company. But it doesn’t make them impervious to criticism, and if they want to endure? If they have long term ambitions of going head-to-head with WWE? Certain points need addressing, before they can move on to bigger things.

A few days ago, interested to know how our followers feel about All Elite Wrestling after Fight for The Fallen, I asked our Facebook users the question: “How Can AEW Improve Its Product?”

As always, I share my appreciation to everybody who shared without holding back. While we could’ve made a longer list, I chopped it down to five examples which were either repeated a lot, or were ideas I strongly agreed with. We’d like to know your thoughts as well.

Seeing talents flourish with plenty of ring time is refreshing. However, the case of silencing crowds by running matches too long, could play an important role for the future. It serves as a tight rope act between giving wrestlers the chance to shine, against wasting time on those who are struggling. A good match in WWE can last between 5-15 minutes, while anything over 20 minutes is considered long. But in AEW, the average match length is noticeably higher.

Inadvertently, it makes some matches feel like a drag. Even more so to those accustomed to the WWE style. I believe some matches could be shortened or extended on the fly, in response to crowd excitement levels. Much like if a match is dead in WWE, Vince may decide to call an audible via the referee. Of course, sometimes there’s no way of avoiding a dead crowd. Especially if a match turns in to a thriller, and sucks the energy away from the rest of the night.

Fight For The Fallen, despite the amphitheater being relatively open, was prone to overheated fans in the humid air of  Florida. By the end of the fifth match they were completely spent. And the next four matches, including the 30+ min. main event, took up another hour-and-a-half of wrestling. So it’s understandable why the crowd was less animated in the latter stages of the show.

Another point to touch on is how many matches had no build. Most didn’t really earn the right to go long, while others required we were caught up with “Being The Elite”. That will change though, when AEW can build feuds for the long term with the TV show. It’s a learning experience, to strike the right balance for the future. As a positive note, AEW has proven we will get longer, competitive wrestling matches. Isn’t that what we wanted?

I think some can be a little harsh of the commentary team, seeing as they’ve only worked a few shows together. I don’t mind the other two (Excalibur & Alex Marvez), but to me, Jim Ross sometimes sounds out of place. Don’t get me wrong, it’s really cool hearing him calling matches again .. but he likes to jab at WWE with lines like “there’s a reason for this wrestling match”. We’ve even heard him being negative of the AEW product .. and having to apologize to the team while on air.

There’s the lack of chemistry too, which I’m sure they will find eventually. As for direction, people seem to underestimate the power of having a guy like Vince McMahon in your ear leading and timing you on every little thing. He might be screaming in your ear, but at least you’re hitting the high notes at the right time. It’s clear that AEW’s commentary team does not have this dynamic, and quite often they appear lost. Scrambling through their notes as they figure out if the main event is next. It’s early days still .. so I can’t blame them, although they need to clear it up quickly if they want to remain as a team. 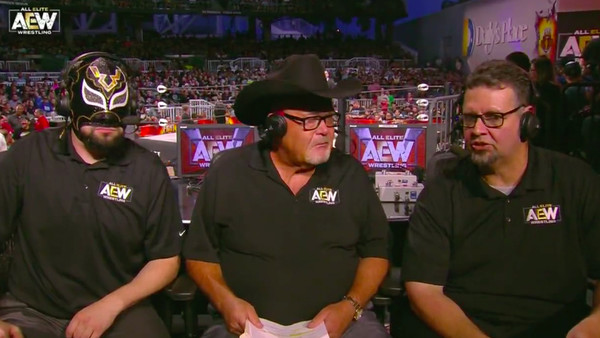 As much as some feel AEW’s audio and camera work is under par, I think it’s more to do with how baby bottom smooth WWE’s production is. With vast amounts of experience year-on-year, WWE’s production is so well executed that any new promotion will always look second rate. You can pump in more money, but it doesn’t always result in better production. Unique to WWE, they hold something over everyone else.

The standards and practices WWE has integrated in to their routines, have been implemented over decades of producing shows week in, week out. It’s not something a new promotion should be expected to replicate fresh out the box. Some were unhappy with the audio quality of entrance themes at Fight for the Fallen, but it could’ve had something to do with the venue possibly not retaining sound as well as usual?

The other thing fans would like to see is better camera work. Again though, it’s something you can’t buy. AEW needs time to establish how they want to shoot, and they’d like to figure out their own way. As for timing, AEW needs to invest in someone who sits backstage and coordinates the show like a military commander. The shambles we witnessed at the end of Fight for the Fallen shouldn’t be happening. Pretty sweet of them though? To donate $150,000 just like that.

One of the biggest things our readers were not happy about, are the repeated WWE mentions. Now, I think it made sense for the WWF and WCW to take shots at each other, seeing as they were established power houses in a war. But when AEW does it? Well, it comes across as tacky. They want people to see them as a fresh alternative .. but by insulting WWE, they insult those who appreciate both. By doing this, they cater to AEW diehards and WWE haters for cheap headlines.

While WWE has name dropped AEW once (DX HoF speech), it was something you’d expect from the moment. Like, it would’ve been strange had they not mentioned it, knowing Billy Gunn was already working for ’em? WWE doesn’t usually name drop other promotions, so why does AEW? Are they trying to convince people there’s a war going on?

Granted, I can understand their frustrations with WWE conveniently scheduling the EVOLVE anniversary show; that was below the belt. But fans tune in to AEW to get away from WWE, so when they bring up the “other company”? There’s a collective groan of disapproval. We get enough WWE every week without a reminder. So what I, and possibly others would rather see? Is AEW doing what they should be doing .. which is letting their actions speak louder than words.

With The Elite and Brandi Rhodes being in positions of power, it’s easy to see why the first shows featured them so much. There’s been some generosity: like Kenny Omega getting beat up by Jon Moxley, or Cody wrestling to a draw with Darby Allin. But outside of that .. many are seeing favoritism. They could be overestimating how much The Elite draws, compared to the concept of a competitive, alternative product being the draw.

Many fans looking for something different, are not jumping for joy when The Young Bucks win every match. Some would like to see more opportunities for other wrestlers, because the product will suffer if it’s clear there’s a strong bias. Speaking of which, is Hangman Page deserving of a push to the AEW World title? Aren’t there others who would be better suited to challenge Chris Jericho? Has he done enough to be cheered over a legend like Y2J?

As talented as Page is, he’s done nothing to earn this. He needed to be built up over several months, not just thrown in the deep end because Omega, Moxley or Cody aren’t available. There’s clear reluctance from fans .. not because they don’t like him, but because they don’t understand what makes him special. The fact he’s on “Being The Elite”, is the only reason I can see for putting him in this position.

With AEW in its infancy, there are bound to be growing pains. As fans of wrestling and competition, I believe we should not sweat the small stuff. Not unless it’s months later, and they keep making the same mistakes. AEW may not have reached its true potential yet, but we’ve seen glimpses of it  So let’s wish them luck on a long journey ahead? As they head for uncharted territory. Will you join them?