If there is one universal cardinal sin in the world of sports entertainment, it is walking out. There is much controversy surrounding this topic these days. With MJF’s seemingly passive-aggressive approach regarding frustrations surrounding his contract, and Sasha Banks and Naomi leaving their women’s tag team titles on the desk of John Lauranitis and subsequently leaving their post, it has made me reflect on some of the more famous cases of stars walking out on WWE.

This was perhaps the loudest of all the walk-outs of WWE. Blazye was a literal trailblazer for women superstars that would come after her, but she was not afraid to act with boldness when faced with uncertainty. In the mid 90’s, WWE was hung up in quite some drama, the pinnacle of the drama being the steroid scandal of Vince McMahon. Blayze was apparently told that she was being let go and wasn’t given a reason why. Simply a letter from JJ Dillon that informed her of her release and she was devastated. This release let to some bitter feelings and anger, and upon her release, she had done some soul-searching.

It was at that point when Eric Bischoff made the call to Alundra to come to Nitro and cut a promo. One of the more infamous moments of the Monday Night wars of the 90s would take place when Alundra would cut a scathing promo on Nitro and would show up, Women’s Championship in hand, and quite literally toss it in the dunpster. She has since stated she regretted that action and would not have done it without Bischoff’s coercion.

Perhaps the most famous example of them all. Stone Cold Steve Austin perhaps remains as the most marketable top guy WWE has ever employed. He was highly influential in swaying the Monday Night wars in WWF’s direction, and helped lead them in to prosperity in the late 90’s and early 00’s. But on Austin’s end, the injuries and drama both in and out of the squared circle had started to pile up. His mobility and star started to wane, and it was clear that Austin’s better days were behind him, and retirement was in front. However, the name “Stone Cold” had a lot of influence in WWE, and was still featured prominently on television in 2002, even as WWE was beginning to usher in a new era, the Ruthless Aggression era. 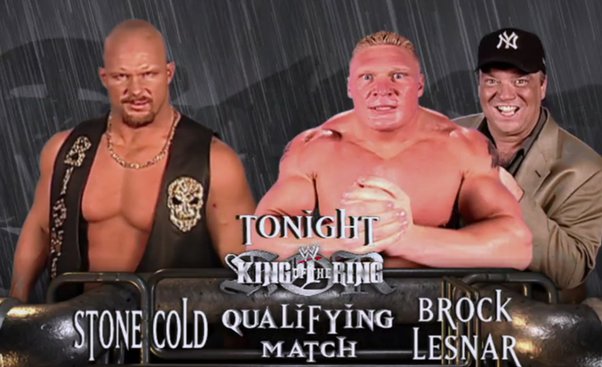 One of the faces of that era would be OVW standout, Brock Lesnar. He was an intriguing prospect. Incredible strength. Insane mobility for a big man. Lesnar was introduced to the RAW roster in 2002 after WrestleMania 18 alongside Paul Heyman, and he was swiftly booked as an unstoppable freak of nature. One of his signature moments en route to become WWE Champion at Summerslam that year was the King of The Ring tournament, which he would win. On the June 10th, 2002 episode of RAW, he was scheduled to face Stone Cold in a King of the Ring tournament match. Funny enough, today is the 20th anniversary of this event.

“At the time they wanted me to fly down to Atlanta for Monday Night Raw and put over Brock Lesnar,” said Austin. “It wasn’t time for me to do the favors yet for Brock in an unadvertised match in a tournament-style TV match whereas hey, man, I love Brock Lesnar, I’d lose to him any day of the week, but build it up so we can all make money off of it and it’s going to mean something.”

At this time, Stone Cold has become very disgruntled, unhappy and very confused as to what his role was in WWE. He was coming off a very forgettable, lackluster feud with NWO’s Scott Hall, and proceeded to bounce around in aimless grudge matches ranging from the Undertaker at Backlash to Ric Flair and The Big Show at Judgement Day. He made it clear on an episode of WWE’s old web series, “Byte This”, that he believed the writing to be substandard and he wasn’t happy with any feud he was involved in for the whole of 2002.

It was becoming increasingly clear that his time as a de-facto top guy was winding down, and the culmination of his frustrations would arrive when he was asked to put over upstart Brock Lesnar. Stone Cold claims he had no problem putting Brock over, but he was also uncomfortable with the idea of doing the job for free on RAW with no prior build-up. Does Brock Lesnar vs. Stone Cold sound like a PPV worthy match? Sure, it does. But it was not booked as such, and this sent Austin over the proverbial edge.

According to an episode of WWE Confidential, the night before the walkout, Vince McMahon got a call from then head of talent relations Jim Ross, stating that Stone Cold was extremely unhappy with the planned match with Brock Lesnar. Vince McMahon then called Stone Cold directly at about 2 that Monday morning to explain why the decision was made and why it would be beneficial to all parties involved, and Stone Cold apparently agreed. Then, when they were getting close to show time, Ross got a call from their travel service stating that Stone Cold had independently booked a flight home in a covert manner. Vince McMahon would then boldly claim that the door was “not open” for Stone Cold to come back and Jim Ross would boldly claim that Stone Cold would never be on RAW again. We were also made aware that apparently Stone Cold had walked out on RAW the night after WrestleMania 18, but was given a pass due to supposed burnout issues.

Of course, Stone Cold’s apparent exile would be short-lived, as he would return in short order at No Way Out the following year right before concluding his WrestleMania trilogy with The Rock at WrestleMania before taking on a “sheriff” role on RAW the majority of that year. He also just recently main evented another WrestleMania two months ago against Kevin Owens. So clearly, WWE is a place where you never truly say never, especially when you are dealing with a name as legendary as Stone Cold Steve Austin.

On the surface, one would think that Punk’s walk-out was surprising given his success in WWE. But behind the scenes, the story of a disgruntled, unhappy, hurt and confused superstar was being told. For years, things have been tense between CM Punk and WWE. At least on CM Punk’s end. We all know of the infamous pipebomb in June of 2011 that would kickstart the “summer of Punk”. CM Punk would indeed defeat the face of WWE, John Cena for the WWE Championship and left the Money In The Bank while kissing Vince McMahon goodbye. In hindsight, that would serve as an appropriate prelude for the events that would precede 2011.

He would defeat Alberto Del Rio for the WWE Championship at Survivor Series 2011 and would go on a 434 day reign as WWE Champion, which was the longest world title reign in the modern era up to that point before Roman Reigns’ current Universal Championship run. However, if you’ll notice during that run, he would seldom be in the main event. As a matter of fact, from Survivor Series 2011 to Royal Rumble 2013, the only PPV’s he main evented were Night of Champions 2012, Hell In a Cell 2012 and Survivor Series 2012. That means over the course of nearly a year and a half, he was only the main event of a PPV three times despite being the company’s top champion holder. That is because while he was WWE Champion, John Cena was still seen as the company’s top man by a longshot. And it is no surprise that the only PPV’s he main evented as champion came either with Cena involved or with Cena being injured. Something that also bothered him greatly was The Rock getting immediate WrestleMania main event status upon his return, while his program with Undertaker, would play second fiddle.

Things would appear to escalate even further in 2013, as it appears Punk had his eye on leaving WWE for some time. On a podcast with Colt Cabana, he would cite some frustrations, such as Brock Lesnar getting sponsors but WWE not allowing Punk to have any after he became hot.

“I had a big money deal on the table, and I went to Vince … I told him my idea, said I wanted to do this sponsorship thing. I deserved it. I got all these new eyes on the product, and he says ‘nope, you can’t do that. Sponsors for Raw would get mad, the other wrestlers would get mad.’ A year later, Brock Lesnar comes back, and the m*********r has sponsors.”

It appears that the physical toll of the WWE schedule also started to wear on Punk, as he claims he would have “died” had he stayed with WWE full time.

“I was never given time off after an elbow surgery, a knee surgery, narrowly avoided a hip surgery. It was always ‘no we need you.’ And it’s nice to be needed, but they will run you dry. I was on that path. And I watched too many friends get swallowed up by this business, and drugs, and everything else they thought they had to do to keep going.”

We of course are also familiar with the infamous Z-pack incident with WWE doctor Chris Amann. Between frustrations with his spot on the card and the physical beating he took, on the January 27th, 2014 edition of RAW, CM Punk would inform Vince McMahon that he has a flight booked for his home in Chicago and that he would be quitting WWE. Since then, he has appeared briefly on WWE’s Backstage show on FOX, but past that, he has not appeared in any WWE capacity. Of course, he has now since enjoyed success as AEW’s World Champion, and has cited a rejuvenated love for pro wrestling.