Hi everyone, just a brief article from yours truly on a subject which seems to have garnered controversy and confusion. As we saw in the first match of the Money In The Bank PPV, James Ellsworth climbed the ladder and retrieved the briefcase before dropping it to Carmella, who was eventually declared the winner by Ellsworth.

On social media I’ve seen so, so, so many people say James Ellsworth won. That’s not true, because Ellsworth is a man and wasn’t part of the match. There’s an argument which states that one must “climb the ladder to retrieve the briefcase to be declared the winner”, which is totally untrue as we’ve seen wrestlers try other ways of getting to the briefcase (like Y2J standing on Big Show’s shoulders) in the past.

JBL stated Carmella won because there’s no rules, and no disqualifications. It’s the first person who (and is part of the match) physically holds the briefcase in their arms. No one outside the match can win the briefcase, however, they can climb the ladder so they can retrieve it for someone else. There’s a few alternate scenario’s I’d like to highlight below:

In the past we’ve seen outside interference in these matches. I remember Wrestlemania X-Seven when Lita, Spike Dudley, and Rhyno provided regular interference for their respective teams. Rhyno went as far as carrying Christian on his shoulders as he climbed the ladder. It’s nothing new, but this time we had the added element of someone not actively part of the match retrieving the briefcase. Carmella never had to climb the ladder, all she needed was to have possession.

In a match like this where someone like Ellsworth can climb a ladder, it’s up to the other competitors to neutralize the threat. Carmella did not cheat as there were no rules to break. It’s a lesson for anyone participating in a match of this nature .. outside help can happen and it’s up to the other competitors to ensure they do not decide the outcome.

Some fans were undoubtedly unhappy with the way the first-ever Women’s Money In The Bank match ended, but I like to think of it this way .. it won’t be forgotten. The controversy of a man getting the briefcase for his woman in such anticlimactic fashion will light a fire under the Smackdown Live Women’s Division and give them the motivation to overcome the embarrassment. The anticipation for the next Women’s Money In the Bank ending with a worthy winner unhooking the briefcase will be higher. Carmella was one of the last names I expected to win last night, so it came as a bit of a shock. Not much more to say about this .. so I’m going to move on and work on something else. Thanks for reading. 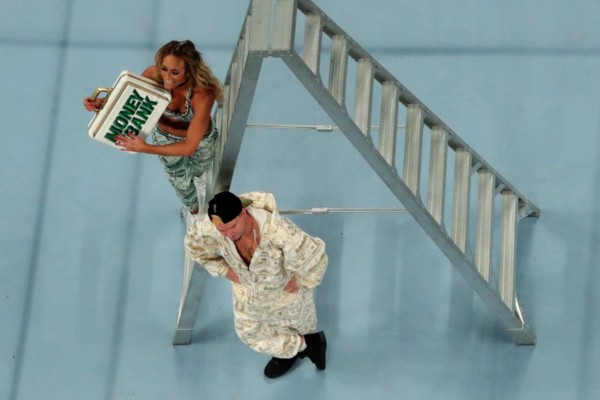