In 1988, Bruiser Brody was stabbed in the showers of the wrestlers locker room. Tony Atlas rushed in to the showers after hearing screams and saw José González wielding a knife. Paramedics took over an hour to reach him, and Atlas had to carry Brody as they didn’t have the strength to lift him. He died shortly afterwards.

While there were witnesses, Gonzalez was cleared and the witnesses were not called on to testify. Brody had a history of doing “bad business”, and in doing so had created some enemies. Some claimed Gonzales would only stab Brody in self-defense, but seen as no one was there to see the scuffle it’s not clear who attacked first. He was also known as one of Carlos Colón’s (the booker and owner of WWC) friends.

Some close to the incident believe there was a cover up by the Puerto Rican legal system. After the case was closed abruptly in early 1989, José González returned to WWC as Invader #1; and booked as a babyface. On April 7th 1989, he won the tag team titles with Carlos Colón. On May 14th, Invader #1 won the WWC Puerto Rico Heavyweight Championship for a fifth time while holding the tag titles. After losing both titles, he won the Heavyweight title for a sixth time in October and held it for the rest of the year.

There remains many questions over the incident involving Bruiser Brody. Some claim Carlos paid off the authorities and had enough power to keep him away from prison so he could continue to book José. But with no concrete evidence, it’s nothing but speculation. There were a lot of unanswered questions swept under the rug. Still, when one of your wrestlers is known to have stabbed another, making them one of your top babyfaces feels a little too convenient for my liking.

There’s several ways this story has been told, but the most common is the following. FMW planned to have a big match between WWC’s José González and Japans Atsushi Onita, the man known for innovating the “deathmatch”

As Bruiser Brody had been a big star in Japan, Onita wanted to capitalize on it with an angle. After Onita and González met to hype the match in a press conference, González left. Onita decided to blade his stomach several times .. but it wouldn’t bleed, so instead he bladed his head and smeared the blood. He went to the hospital to ask a doctor to give him stitches, where many refused .. except one, who gave in and decided on one (perhaps two) stitch. All the while, Onita had Japanese media on hand to take pictures.

González was unaware of this. Onita had someone take pictures of him being “stabbed” by González. The mainstream press caught on, and the match was dropped and never talked about again. There’s a rumour the Yakuza gang (who were known to fund wrestling shows) was trying to bait González to Japan so they could exact revenge on him (as Brody made them a lot of money), but no one’s been able to confirm the story. 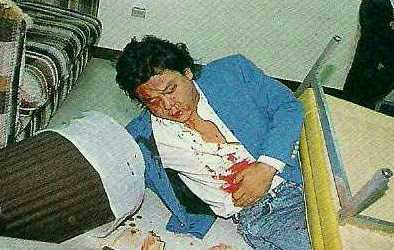 Looking back, perhaps this isn’t as controversial as we know Sgt. Slaughter was portraying a character. But back in 1991, many fans still believed in kayfabe, so to introduce the gimmick during the gulf war was a risky affair. It made sense to introduce Sgt. Slaughter as the bad guy Hulk Hogan would go on to defeat for the WWF title at Wrestlemania VII (a very patriotic PPV).

Did it do the job of getting Slaughter over as a top heel? Yes. Did it get a ton of heat? Yes. But let’s face it .. you could put the gimmick on anyone and guarantee heat with American audiences. The fact that Slaughter was billed as a Real American and G.I. Joe before it .. made the gimmick even more shocking. He was the ultimate traitor. In kayfabe, he was photographed meeting Saddam Hussein.

Slaughter got so much heat he received death threats. He needed his own team of security to get to shows, and a bullet-proof vest. Don’t get me wrong .. I love a good heel, but sometimes too much heat is dangerous. Would this angle be so fondly remembered had Sgt. Slaughter been shot? What if he was killed? Would the “but he was getting heat” argument still stand? Absolutely not.

Whether you loved or hated this, it was cheap heat at a time when American citizens may have had family members fighting the war. TV shows have been known to do similar things in the past, but the WWF was immensely popular and families were watching. It would not fly by today’s standards. WWF offended its audience so they could have a viable anti-American champion for Hulk Hogan at Wrestlemania. But was it worth the aggro?

From a business standpoint, it didn’t do a lot for the company. Looking back on it, with what we know of the business, to some it’s like wrestling gold. They grew up watching this, and they remember hating Slaughter so much for being a traitor. You don’t get heat like it these days. But the biggest question is .. was it good heat, or bad cheap heat? While Slaughter played the part well, it was pushing boundaries for all the wrong reasons. It was using war and strong patriotism as a marketing gimmick, and to many it was definitely in bad taste. Not shocking now like, we’ve seen worse .. but back in 1991 it was a little too much.

And to round this up, we have one of the biggest examples of nepotism in wrestling history. In 1992, ‘Cowboy’ Bill Watts became the Executive Vice President of WCW. He trained his son Erik Watts as a wrestler, and only three months in to his career was signed by WCW.

It was clear to the wrestlers and the fans he wasn’t ready to work for a top promotion. He lacked skill, and the fans soon turned on him when he got a major push as a babyface. By 1993, there was no turning back as the fans were going to boo him no matter what. Commentary tried to cover up their disdain, but it was pointless … they knew why he had a job.

In September Erik went undefeated on house shows. He teamed with Shane Douglas to defeat DDP & Vinnie Vegas (Nash). He teamed with Ricky Steamboat to defeat Greg Valentine & Dick Slater. In a six-minute match at the Clash Of Champions #21 PPV, Watts teamed with Kensuke Sasaki against Arn Anderson & Bobby Eaton; Erik won the match by STF submission on Eaton, which to some is a pivotal moment as they couldn’t believe such a young rookie beating a veteran like that . He suffered his first loss in a United States title match against Rick Rude on WCW Saturday Night.

In late 92 / early 93, Erik defeated Steve Austin, Brian Pillman, Tony Atlas, Paul Orndorff, and wrestled several time limit draws with Chris Benoit. He went on to challenge for the WCW TV title, and worked title matches with NWA Champion Barry Windham. The nepotism was obvious, and the fans grew to resent Erik. The wrestlers didn’t want to make him look good either.

Erik had a brief run in the WWF as part of Techno Team 2000. He was a jobber in WCW during the attitude era, and had stints in ECW and NJPW. He worked in TNA from 2002-2005, having greatly improved. He left the company in early ’05, and has worked the independent scene ever since. Thanks for reading everyone! Appreciate it. See you again.