Home Articles Grading Each Move Of The Superstar Shake-Up

As all of you saw, WWE just completed its annual Superstar Shake-up, and there were some interesting moves. There were a lot, but I’ll be grading each individual move based on what each guy can bring to the roster. Let’s get right into it, starting with the red brand.

RAW opened with former United States Champion Jinder Mahal demanding to be treated like Brock Lesnar. He subsequently lost his title to Jeff Hardy. No Way Jose came backstage which may be foreshadowing his next feud. That pretty much is in line with what Jinder was doing before he abruptly became a main eventer for six months. The former WWE Champion will have WWE’s mainstream names to contend with if he wants to make a name for himself. Unfortunately, Jinder’s style has yet to change, and he will do no better on RAW than he did on Smackdown. He’s still bland, his promos are still packaged in unoriginal fashion, and he didn’t address any need RAW may have, unfortunately. But at least 3MB can reunite now. All about them silver linings.

Much like Jinder, Baron Corbin won’t make RAW any better because he himself hasn’t shown any improvement since the 1st draft either. We’ve been hearing for months on end that WWE has huge plans for Corbin, but those plans haven’t amounted to anything but a disappointment. If there are main event plans in store for Corbin, he’ll be working with the likes of Rollins, Balor, and Reigns, and they are in a completely different class than him. Corbin’s performance on Smackdown doesn’t inspire confidence that his tenure on WWE’s premiere show will bear any fruit, but again, those reports of him having big plans because of something Vince apparently sees in him haven’t quieted down. Maybe that bald spot in his hair is blinding Vince because I don’t see it.

Bobby Roode especially has disappointed since his main roster call-up, but it isn’t because he’s not a good worker. It’s because, for some bizarre reason, WWE turned Roode into a guy you’re supposed to cheer for. When he first made his NXT debut, what made him so popular was not only his theme song but his arrogance. He had entire choruses singing for him. He came out in luminescent robes. But best of all? He was a self-loathing egomaniac, and that’s how we love our heels. All of a sudden, when he’s brought to Smackdown, he’s smiling and we’re supposed to be cheering for him now. Everything about his gimmick says that he should be an arrogant heel. If he turns heel, as he should, then his run may be a success. If he remains a face, he’s just a guy that will have people sing his theme song and react mildly to him.

They debuted together, and I’m not sure if they are going to be a tag team or not, but since they appeared as a pair, I’ll grade them as a pair. I love Drew as a heel. He has the look, he has the moveset and he has the aura around him. Ziggler also has the cockiness that can compliment his style well if they are a tag team. Since they combined their finishers, I think that’s what they will be. I think Ziggler needed a change of scenery (though I’m sure we’ve said that thousands of times about him before), and he wasn’t going to go anywhere on Smackdown. At the very worst, Ziggler’s still a serviceable worker with street cred and Drew enjoyed some success in NXT. If they are booked right, I think they can be a valuable asset to the RAW tag team division. If they are separate singles wrestlers, they still can be used effectively to a better extent than guys like Corbin and Mahal from what I’ve seen. 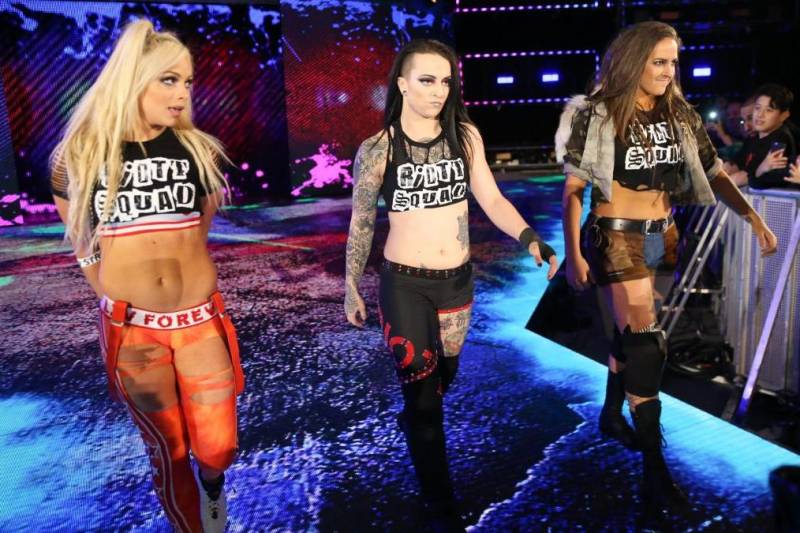 The Riott Squad haven’t really done anything to separate themselves, and they are pretty much what Absolution was on RAW, meaning their role won’t change and they are just doing what was being done before. I think there’s a better chance that Ruby becomes RAW Women’s Champion on the red brand than on the blue brand with Charlotte and Asuka occupying the top spots. , and maybe if they are booked well they can be of value to the RAW Women’s Division, but I’m not sure how they will do anything that Mandy Rose and Sonya Deville weren’t already doing before them. Bobby is someone that has enjoyed great success since leaving WWE in both mixed martial arts and TNA, and he looks the part as well. He’s been rumored to be feuding with Brock over the Universal Championship, and he’s probably one of the only guys on the roster that can go toe to toe with Brock. What he may lack for in promos he makes up for in athleticism and strength. If he’s not used as a main eventer, he’s a serviceable mid-carder as he was in his first WWE stint. I think the versatility that he brings to the table can help RAW a good deal.

It’ll be so refreshing to see Kevin Owens and Sami Zayn be involved in something that doesn’t involve Shane McMahon for a change, but for the sake of both of their careers, I think they desperately need to find a way to separate these two and allow them to blossom on their own. Unless they are going to be a permanent tag team, they won’t be looked as anything more than what they are, and this goes double for Sami, considering that he has STILL yet to win a championship since coming over to the main roster. That said, if you remove all of that and erase Shane McMahon from their memories, they are two of WWE’s best performers, and them being on RAW can only be looked at as a plus. However, I’m still trying to recover from the amount of Roman/Kevin matches I saw on RAW in 2016/2017, so let’s keep them away from each other, yes?

Ember is dynamite in my opinion, and I think she is going to do a great job in getting herself used to the main roster. She has a distinct look, she can easily separate herself from the rest of the RAW Women’s roster, and she’s an uncanny ring worker. Her run in NXT speaks for herself and there’s no doubt in my mind that she’s going to be an asset to the RAW Women’s Division. She’ll also have no problem getting over with the crowd because I think she works a style that promotes engagement and anticipation. I’m highly looking forward to seeing what she can do with the likes of some of her former NXT alumni such as Banks, Bayley and Bliss.