Welcome back to this wonderful mini-series featuring The Hardys 8-year journey back to the WWE. We finished part three with Broken Matt forgetting who he was after an attack by the DCC.  He could not understand why people were telling him to delete, and he didn’t like wrestling any more. What he really wanted was to stay at home and do DIY stuff. His family tried to help him remember who he was .. but when he saw the things he’d done he was appalled by it.

After a couple of weeks of “Amnesia Matt”, Reby pushed Matt into remembering who he was again. He grew angry over not being able to remember his broken ways, so he charged outside to face The Seven Deities. He looked to the sky and asked them for a sign .. so they struck him with a lightning bolt. He re-awoke as his broken self, and more powerful than ever before. Shortly after, The Broken Hardys returned to the Zone of Impact to get revenge on the DCC.

In the coming weeks, Broken Matt hyped a special event at the Hardy Compound called “Total Nonstop Deletion“. Several premonitions gave him ideas, one which involved a main event named “Tag Team Apocalypto“. The idea led to a full episode of Impact Wrestling being shot at the Hardy Compound with friends, family, and dedicated fans in attendance.

The main event of Tag Team Apocalypto sent an open challenge to all tag teams across space & time to converge on the Hardy Compound for a match with the TNA Tag Team titles on the line. Broken Matt challenged teams outside of Impact Wrestling to show up, including The Young Bucks, The New Day, and The Wyatt Family.


The event began with a comedic segment of a news reporter informing us a volcano had emerged in North Carolina. He advised civilians to evacuate the area and return after the eruption. The first match of the night saw the wrestling debut of Broken Matt’s toddler son King Maxel Hardy in a No Disqualification match. After Maxel gave the sign to delete (!) .. Senor Benjamin hopped in the ring and tasered Rockstar Spud. Maxel went for the cover and kept his shoulders down for his first pin-fall victory.

Not going to spoil the rest of the show .. as I consider Total Nonstop Deletion the climax of what The Broken Hardys did in Impact Wrestling. Everything that happened after Matt became broken culminated at Tag Team Apocalypto. What I’m saying is .. if you’ve read all parts of this series .. yet never saw Total Nonstop Deletion, I recommend finding some time to watch this special episode.

2017 – After the success of Total Nonstop Deletion, Decay and the DCC continued to challenge for the tag team titles but were unsuccessful. Matt found the lack of freedom in Impact Wrestling disturbing, and soon enough The Seven Deities gave him a premonition with an idea called the “Expedition Of Gold“.

The Expedition Of Gold would see The Broken Hardys travel around the world to other promotions and claim as many tag team championships as possible. Doing so would make them the best tag team in all space & time. To get to far out places like Tijuana in mere seconds .. Matt & Jeff used a special ability The Seven Deities had bestowed on Vanguard One .. the power of teleportation! 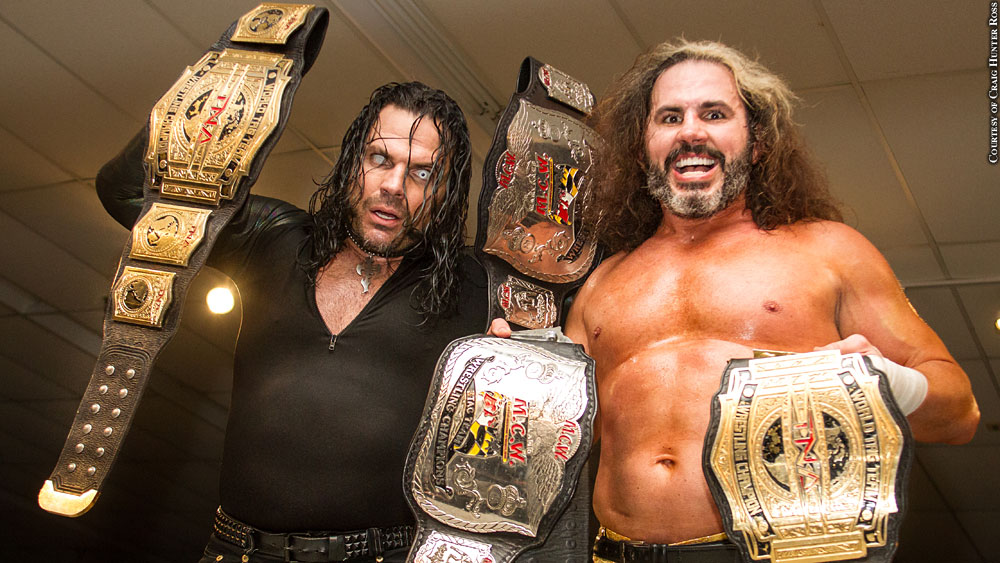 
In January 2017, the company went through a change of leadership as Anthem Sports took over TNA Wrestling, forcing Dixie Carter to stand down from her position. The new president Ed Nordholm invited Jeff Jarrett back to the company he founded, and offered him the position of Executive Producer and Chief Creative Officer. A number of wrestlers left due to new management, including Drew Galloway (now on NXT), Jade, Mike Bennett, Maria Kanellis, and in late February The Broken Hardys.

Reby Hardy went on a Twitter rant, slamming Impact Wrestling for their unprofessional conduct. She claimed working for Impact Wrestling had been great for their family, but they waited too long to offer new contracts and what they were expected to sign was not acceptable considering the exposure the gimmick had given them. Apparently, Matt & Jeff were told if they weren’t happy they should go back to WWE.

They wrote The Broken Hardys off TV by having Vanguard One malfunction as they teleported to their next destination. It resulted in The Hardys disappearing while Decay appeared out of nowhere with the tag team belts in their arms. Well .. that’s one way to do it!

The Honorable Ring: Only weeks after being released, The Broken Hardys signed a short-time deal with Ring Of Honor. They won the titles in their first match against The Young Bucks. Soon enough, it became news that Matt, Jeff, and ROH were not allowed to use the broken gimmick as Impact Wrestling sent out cease and desist letters not long before the 15th Anniversary Show. It cost the promotion money as some networks were forced to pull the show.

The case over who legally owns the gimmick is in dispute as Ed Nordholm credits the invention to Jeremy Borash, Dave Lagana and Billy Corgan, while the Hardy family credit themselves and Borash. Frustrated by the Anthem Sports Owl, Matt decided it was time to render the TNA tag team titles obsolete by throwing them into the Lake Of Reincarnation.

The Hardys worked their last match in ROH on April 1st at Supercard of Honor XI. In the main event, The Young Bucks defeated them in a ladder match for the ROH World Tag team titles. After the match they said their goodbyes to The Young Bucks, ROH, and its fans. The next day, The Hardy Boyz made a surprising and lucrative return to WWE at Wrestlemania 33 where they won the Raw Tag Team titles in a four-way ladder match.

And there we have it folks .. an 8-year journey in a four-part mini series. They hit rock bottom, they went through obscurity .. but they cleaned up and fought back. They kept plugging away, reinventing, winning titles, and had the time of their lives being broken.

All I’m going to say is .. don’t get your hopes up on the gimmick returning. It is possible that WWE could help Matt acquire the gimmick and give him the creative freedom to use it properly. On the other hand, what if Matt doesn’t get the right? What if he does .. but WWE changes it too much? What if Matt & Jeff leave, or get injured? There’s too many possibilities to be sure of anything, so I will only believe it when I see it live on Raw.

With everything said, I do not believe I missed anything important. Let’s hope the next chapter is a wonderful experience .. and not one worthy of deletion! Thanks for reading. I’ll fade away and classify myself as ..