We’ve grown so used to seeing WWE’s female talent being treated as “equals” to their male counterparts (which could be an article in itself), it’d feel blasphemous to revert back to when bikini contests and mud wrestling were all the rage. Most certainly, we don’t want to see Vince McMahon ordering Trish Stratus to strip and bark like a dog. Objectifying women for cheap thrills is a tired act, and it’s kinda pointless when the internet exists. But as a teenager before the internet, women like Terri Runnels, Trish Stratus, Jacqueline, Lita and Torrie Wilson were let’s say .. eye-opening. I cannot deny the sexualization of these women helped to pique my interest in wrestling before I understood its appeal. There’s a big difference between women being empowered by sexuality, and being forced to sexualize themselves to get airtime. There’s also a difference between a champion getting the title for their overall qualities, and champion who only holds it because of their looks. Yet, in an age where the business looks to cut back on smut, there will always be an underlying form of “sex selling” to the audience. It’s not in the forefront these days, especially when you watch the women in WWE .. but it’s there if you look at the men. How often does an ugly man (“ugly” is a broad term .. I mean wrestlers women don’t typically lust over) win the WWE/Universal title? Pretty rarely. And if they do, they usually excel at other aspects of their game. Why don’t we see a Mick Foley, or a Kevin Owens, or a Bray Wyatt holding the WWE/Universal title for months on end? Because they don’t “look” the part.

I’d like to go back to the late-80’s. Remember Rick Rude? He was one of the first to embrace sex as a selling point in the WWF. He’d insult the less attractive men in the audience, and kiss a woman Heenan chose for him from the crowd. Yet, he was a great worker! It was his ring work which made the gimmick acceptable. He talked trash, looked sexy, and backed up everything he said in the ring. He never won the WWE title .. but he did win many other titles. Before Shawn Michaels, most (certainly not all) WWE Champions were larger-than-life characters who appealed to the audience with the “wow” factor.

The Heartbreak Kid showed us you can get over by selling sex to the audience, and no one complained because he was a great worker and character. Diesel though? Was he WWE Champion almost a year for being “larger than life”? Or was it the way he looked? It seems clear that WWE sold Diesel much like they’ve sold other WWE Champions. Around this time, Sable followed in HBK’s footsteps and became a household name. When they brought back the women’s title, she held it for 176 days .. before losing to Debra in an Evening Gown match (which HBK was part of). Neither Diesel, Sable, or Debra were ever wizards in the ring. If Diesel wasn’t 7 foot with L’Oreal hair .. he wouldn’t have been champion. If Sable and Debra didn’t have big chests? They likely wouldn’t have won anything either. Yet, for the time it worked in getting more casual viewers interested in the product.

While WWE weren’t as blatant with champions like The Rock and Triple H, there’s no denying both have strong female followings. Women go weak at the knees for Dwayne (even now), and other women don’t care how evil Triple H is .. he’s got that body. I swear, I had a friend (yes .. a female friend!) who only ever watched the show to lust over Triple H’s body. So he wasn’t selling sex blatantly like HBK, yet WWE knew he had a strong female following for the way he looked. After the fall of the Attitude Era, WWE shied away from this practice, again opting to have “larger than life” champions like Hollywood Hogan, The Undertaker, Brock Lesnar, and The Big Show. We even had a period where true workhorses like Kurt Angle, Eddie Guerrero and Chris Benoit found time in the spotlight. It was a magical time when the most deserving workers were given opportunities to show they could run with the ball. 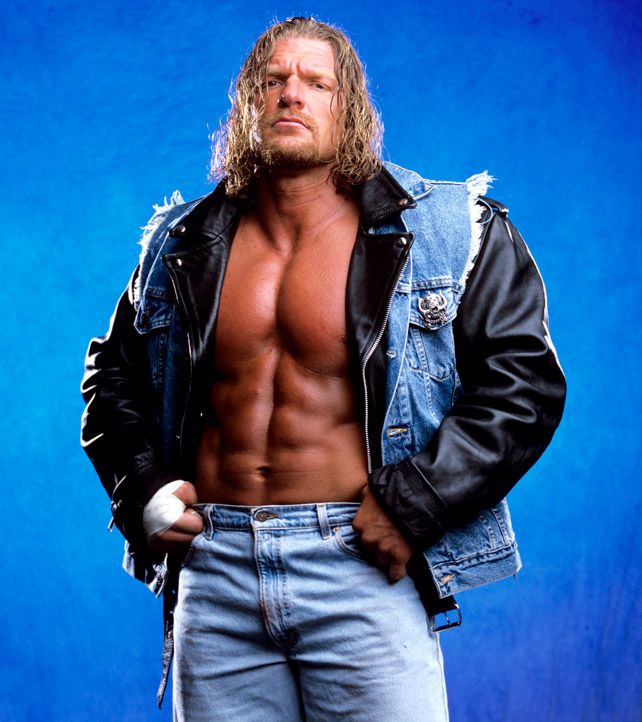 Again though .. WWE didn’t stick to this formula as they reverted back to selling “the look”. Think about it .. what’s John Cena without his incredible physique? Certainly not a 16-time World Champion. Randy Orton? He’s got more female fans than male no matter what he’s doing. Jeff Hardy’s another the girls love (his brother was always the better worker but never became World Champion). Batista’s probably another who found success due to his size and body. A more recent example? Roman Reigns. Did you ever see that video of the woman kissing him without permission? That’s his selling point .. if it was a man doing it to a woman superstar he’d be getting time in court. The double standards are there .. but they’re not brought to light because guys can sell sex without repercussion; therefore women will never be equal as they’re labelled trashy while men are branded studs. Below is the video of a woman kissing him without warning, despite Roman being married with a kid. He was really unhappy about it.

So why did I make this? Well, it began with a new Impact Wrestling Knockout on the scene called Scarlett Bordeaux. In her first promo, she stated she wanted to “make wrestling sexy again” and doesn’t want to be “hot-shamed” while fighting for women’s rights to be sexy. I thought it was great .. I mean, I ain’t seen her wrestle (aside from a jobber match on Raw), but I hope she can really well so it’s not all gimmick. I went on the Impact Wrestling FB page to see the responses to her promo, and came across the following type of comments ..

“There’s a women’s revolution going on in WWE .. but Impact wants to go back to the old days? Disgusting. Pathetic.”

There were several comments like this, with some replies arguing it’s a gimmick and neither she, or Impact Wrestling should be disgraced. After all, for anyone who knows the history of the Knockouts Division, will know it has always sold the Knockouts as incredible wrestlers and sexy women. They even had photoshoots of ODB! TNA/Impact has always treat their Knockouts equally. We never got Awesome Kong photo shoots because it didn’t make sense for her character. Impact Knockouts come in all shapes and sizes, and it was the Knockouts division which created the women’s revolution (starting in 2008) while WWE were stuck with Divas working 30-second matches. It was Impact who gave women the platform to show what they could do on television. They showed wrestling fans what’s possible, so Divas became more of a disappointment. So much so it eventually lead to the #GiveDivasAChance movement. But would it have happened if Impact and other wrestling promotions (SHIMMER, Japan etc) treat their women like Divas too? I doubt it.

While WWE remains PG, it’s logical their women superstars would not be sold in the way Divas were, as it goes against their “revolution”. It’d be like going back in time. There’s still undoubtedly, a tiny bit of sex selling though, but it’s mostly just photoshoots on the beach, or dressing up like a cowgirl in a barn. When Charlotte posed naked, it was more classy than crude. It’s not in your face like it was in the 90’s, but it’s there without bringing too much attention to it. Outside of WWE? It’s a different story. I believe if Scarlett Bordeaux wants to be the Rick Rude of the Knockouts Division then she should be allowed. If she sucks in the ring and turns out to be another Kelly Kelly? Well .. is it so bad? As long as she doesn’t hold the Knockouts title months on end (Torrie Wilson never needed a title to be remembered), then it’s fine? Right? I feel like someone’s going to make me out to be a monster for suggesting women can be sexy in 2018. I don’t think I am, as I’m sticking up for the rights of women.

Some enjoy feeling empowered by their sexuality (man or woman), and so long as they’re not being forced in to doing it, then I think it should be acceptable. After all, would Shawn Michaels be HBK without his Sexy Boy theme? Would Rick Rude be a legend without the gimmick? Would Randy Orton be The Viper if he wasn’t so good-looking? The answer is no to all of these. Sex appeal has been in wrestling as long as it’s existed, and I believe ignoring it limits the creativity and potential exposure of some talents.

And after all, in an age when WWE cuts back on treating its women like objects .. doesn’t Scarlett Bordeaux’s gimmick make good heat in response to it? She’s doing the opposite, and she’s not been told what to do (Impact does not script their promos). If she wants to be sexy, then let her be? And not because I’m a guy who likes women .. but because I believe in equal rights for women. They shouldn’t be dictated too, and restricting sexy men or women from being sexy? You’re taking their appeal away. Let them express, so long as it doesn’t get too out of hand. So I thank Scarlett Bordeaux for making wrestling sexy again, but I’ll reserve judgement on if she’s a future Knockouts Champion til I see her skills in the ring.

This subject has the potential to stir, so I ask you to be respectful in your comments. It’s an opinionated piece which does not represent the views of the site or other writers. I don’t believe I’ve said anything grossly offensive today, but if I have? I apologize. I’m sorry for sticking up for women and men who want to express themselves. I’m not trying to take women’s wrestling back to the dark ages .. in fact, I want women’s wrestling to have more freedom. It’s not just about the wrestling, it’s about characters as well. And I’d love to see women showing they are strong, sexy, skilled, and willing to stand up for themselves in a world which continues to dictate what is or isn’t right to them. Sexuality in WWE may be on death’s door, but it doesn’t stop other promotions using it to garner heat. It doesn’t stop the Velveteen Dream either, unless the main roster strips that part of his character away.

As always I thank you for your time, and I hope the comments can be intelligible and respectful. I will not tolerate misogyny, so any comments encouraging this will not be accepted. See you again! Cheers.