Home Articles Has The Media Blown The Racist Hogan Story Out Of Proportion? There’s no point in trying to block him from history, as he played such a huge part, you could never reference the history of wrestling. With that being said, I know there have been many updates on the site over the remarks Hogan made. Remarks made eight years ago when he was unaware he was being taped. It’s bad enough that somebody recorded private moments between Hogan and Heather Clem (Bubba The Love Sponge’s ex-wife), who were having sex with consent from Bubba, but to take it one step further and publish a private conversation is clearly a way for the media to make money by discrediting a celebrity.

Hulk Hogan is such a well-known celebrity, it’s rewarding for the media to put him under a microscope. Just like many celebrities these days, anything the media can use to discredit them will sell. They will find the smallest details and blow it out of proportion, then the collective mass of news reporting makes it sound worse than it is.

Before I go into this story in more detail, I would like to give an example of a recent “news” story which caught my eye. I’m English, so naturally I understand the ins-and-outs of the World Wars (thanks to history lessons in school) and the negative stigma behind anything resembling and glorifying the Nazi regime. 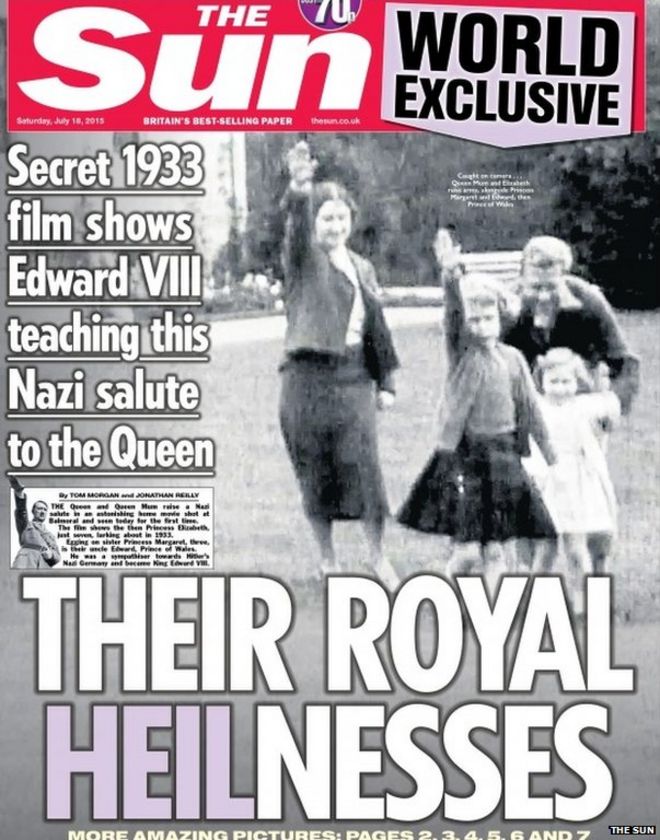 When I saw this story, I signed, tutted, and felt nothing but disgust for The Sun and any other news outlet which published the story. In this instance, someone had published a private video of the Queen when she was younger (girl in the middle), doing a Nazi salute. The Queen was upset by the story, and anyone with a functioning brain could see (from the video) the family appeared to be waving to someone, and using the salute in a joking manner.

Back in those days, there was no negative stigma behind the salute. It’s likely the adults where joking around, while the future Queen was merely copying and had no idea what it represented. While it’s true that Edward VIII may have been a Nazi sympathizer, that has nothing to do with the Queen, and clearly the story was used to discredit the Queen, showing that nobody is safe when you can take something out of context and blow it out of proportion. It’s the kind of low story the media will stoop to, to sell their product.

It’s all about the money, and somehow they get away with destroying people’s lives for their own gain. They will claim that everyone has a “right” to know these stories … but to be honest, I could have done without this in my life. It’s clearly an invasion of privacy, and all it tells you is that the family played around with a salute which would later become a symbol of the evil behind World War II.

Returning to the Hulk Hogan story, it was an invasion of privacy. There’s no telling of the context behind the words, whether he was inebriated, whether his hatred for the one person he talked about, came out in a manner which appeared like he was slandering a race of people. Let’s read what was said.

“She is making some real bad decisions now. My daughter
Brooke jumped sides on me. I spent $2-3 million on her music career,
I’ve done everything like a jackass for her.”

“The one option Brooke had, Brooke’s career besides me, is [to] sell beach records.”

“I don’t know if Brooke was f*cking the black guy’s son,”

“I mean, I don’t have double standards. I mean, I am a racist, to a
point, f*cking n***ers. But then when it comes to nice people and sh*t,
and whatever.”

“I mean, I’d rather if she was going to f*ck some n***er,
I’d rather have her marry an 8-foot-tall n***er worth a hundred million
dollars! Like a basketball player! I guess we’re all a little racist. f–king n***er.”

Despite the comments, many in the business have defended him, including his own daughter Brooke. They say Hogan is not a racist, and there have been examples shown. Once again, something which appears bad at first glance, could easily have been taken out of context and blown out of proportion.

There’s been many examples of racism in the WWE, enough examples for a media outlet to make a huge deal out of it, but the media doesn’t make money by attacking companies, they attack individuals with wide popularity. It’s more personal that way, they can post a picture of the evil person who did it, they can point the finger and shame them. It’s harder for an individual to fight the media than a multi-million dollar company.

Once upon a time, I was researching racism in the WWE, and I was going to make a large article on the subject. I never finished it, and I scrapped the idea, but I did find an interesting video of a media outlet interviewing Mark Henry and Koko B. Ware (WWE Hall Of Famer) over the subject of racism. Naturally, as Mark Henry is a company man, defended WWE, while Koko B. Ware shared his experiences of racism in the business.

Koko believed the WWE was racist, not just towards African-Americans, but anyone who was not a white Caucasian American. Koko expressed how you needed to be white to get to the main event slot and get the best money, and Mark Henry did everything to defend WWE. The interviewer (who was also African-American), was surprisingly respectful (I’ve heard too many rude American reporters), and pointed out Henry’s contradictions. Mark didn’t have good enough answers and would make excuses, especially when asked why WWE has never crowned an African-American WWE Champion. After reading Henry’s comments over the recent Hogan story, it told me that Henry continues to be a company man, and will defend their actions as long as he remains employed.

You can watch the video below. It’s twenty-two minutes long, but its interesting to hear how defensive Henry is here. The interview was conducted just over a year ago. The video I posted below does not have the best video quality, if you would like better quality, you can watch the original video from its source at this link >>> http://live.huffingtonpost.com/r/segment/racism-wwe-wrestling-/53c01be002a760131f001011