Home Articles Who Are The Newest Signees In WWE? Hi everyone. I’m still trying to process the shift in the wrestling industry as of this weekend. It wasn’t all about Ronda Rousey, there’s other signees who could change WWE and force some talent to up their games. WWE is getting more competitive each year, and as a fan it’s really enjoyable. I’m excited to see where it goes, but do the fans know who they are? This is what I want to work on today, for those who would like to know more.

In a time not so long ago, NXT was a very different place. And so was Derrick Bateman, he had the charisma, he had the motivation, but he didn’t quite have the character yet. He found himself participating in games reminiscent of a TV game show. And here he is .. enduring a date with Daniel Bryan and The Bellas.

Outside of NXT we only ever saw Bateman jobbing, usually on Smackdown. He worked hard, but was released by WWE in 2013. A few months later, he showed up on TNA Impact Wrestling as “EC3”, Ethan Carter III. He was named Carter so he could be passed off as Dixie Carter’s (president of the company at the time) spoiled nephew in storylines. EC3’s antics of beating up jobbers caught the attention of Sting.

With every match win, EC3’s confidence grew. He recruited the likes of Rockstar Spud and others to do his dirty work. He gained an undefeated streak, which propelled him to main event status. In his early TNA career, he defeated the likes of Sting, Kurt Angle, and Bully Ray. Over the next year or so, EC3 remained undefeated, as he began mistreating his Chief Of Staff Rockstar Spud. This eventually led to Spud reaching his limit, and he lashed out at his employer. They settled their differences in a bloody, and pretty gruesome hair vs. hair match (which EC3 won).

In the summer of 2015, EC3 beat Kurt Angle to claim the TNA World title for the first time. He defended against Angle, Drew Galloway (McIntyre), Matt Hardy, and Jeff Hardy, before losing the title to Matt in a Triple Threat match where Drew took the fall (making him still unpinned). Due to the way Matt won (Jeff was the guest referee and counted too quick), EC3 had a storyline injunction placed on him, meaning the title had to be vacated. He worked towards getting his title back, which he did by going through a tournament and beating Matt in the finals.

EC3 turned face a few days later when his hired help (Tyrus & Spud) turned on him and joined Matt, in a match which saw him lose the TNA title again. In the spring of 2016, after failing to get the title back, he entered in to a feud with Mike Bennett (AKA Kanellis). Bennett did the unthinkable and pinned EC3 clean. It marked the beginning of a downward spiral for his Impact Wrestling career, as he never fully recovered from the loss.

2017 wasn’t the best year, but he did manage to win the Grand Championship by beating Moose via split decision. He held on to it for a bit, til he lost it to Matt Sydal. He’s scheduled to appear on Impact Wrestling (taped episodes), where his character will be wrote off.

He went to Impact to prove he could be a draw in his own right, and for a while it seems he was happy to be making a name for himself. Yet it seems new management were less willing to give him opportunities to carry the company, so it was either continue in mediocrity, or try his luck with a return to where he got his first big break. Only this time NXT is a wrestling show, and he will fit in so well the company will never consider releasing him again. EC3 has the potential to be a top heel on any WWE show.

I’m not the biggest ROH follower in the world, but I’m very aware of the tag team known as War Machine. The cool thing about these guys is they only debuted a few years ago (2014) and has stayed together since. Over the past few years, War Machine have claimed the ROH Tag titles once, and the IWGP tag titles twice. They’re a force to be reckoned with, and what blows me away is the level of competition in the NXT tag division.

Just think about it .. NXT has O’Reilly & Fish, Authors of Pain, Sanity, Heavy Machinery, Street Profits, Moss & Sabbatelli, Moustache Mountain, and TM-61. So the NXT tag division’s already stacked, and they’re adding War Machine to the mix? And it’s not like the Raw & Smackdown divisions are overcrowded either, so expect one or two to move up soon. They’ve got chemistry, and they’re both solid workers .. but they’ve yet to prove they can be characters WWE can sell.

A couple of years ago, The Rock gave Ricochet a much deserved rub by commenting on his talent in a public setting. You can see the original post here:

#Repost @kingricochet
Anyone that knows me knows how much #therock has influenced me. He’s literally the reason I wanted to become a wrestler. He had it all, the look, the mic skills, the charisma, the in ring work. He was a 10x world champion but he wasn’t afraid to lose. He knew how to work a crowd, he could make them hate him then love him then by the end hate him again. And still to this day he continues to inspire me to be better in every way. There will never be another like him. There’s a reason why he was called “The Great One.”

therock: Came across this amazing post from a man who’s out there grindin’ and chasing that greatness. Thank you so much @kingricochet for your kind words. I’m a lucky dude to have had the success I did in the world of pro-wrestling. A world that I grew up in and will forever be in my blood. I’m honored to be your inspiration as you go down that long hard road for success. Remember these important things: Always stay above the garbage of backstage politics and always give the audience what they want. Whether you’re a heel or baby face – going over or doing a job. Doesn’t matter.. always give them what they want. And most important.. HAVE FUN! Wish you all the success in the world brother and hope you become a big star in our business. I’ve seen a few of your matches – you’re an incredibly gifted/athletic worker. Keep workin’ hard and chasing your greatness. And I thought I was cool doing a little candy ass forward roll into an arm bar. 😂 👊🏾

Needless to say, Ricochet’s path to WWE has been a slow one. Now he’s finally in NXT he can show WWE fans what he’s about, and as one of the greatest high-flyers in the world, the NXT Universe will be delighted to have him onboard. He’s not new to the business, he’s very well-accomplished everywhere he’s been, having claimed titles in New Japan, Pro Wrestling Guerrilla, Lucha Underground, and Dragon Gate. Just like War Machine, Ricochet will need to prove he can be as much of a character as his ring skills are sublime. 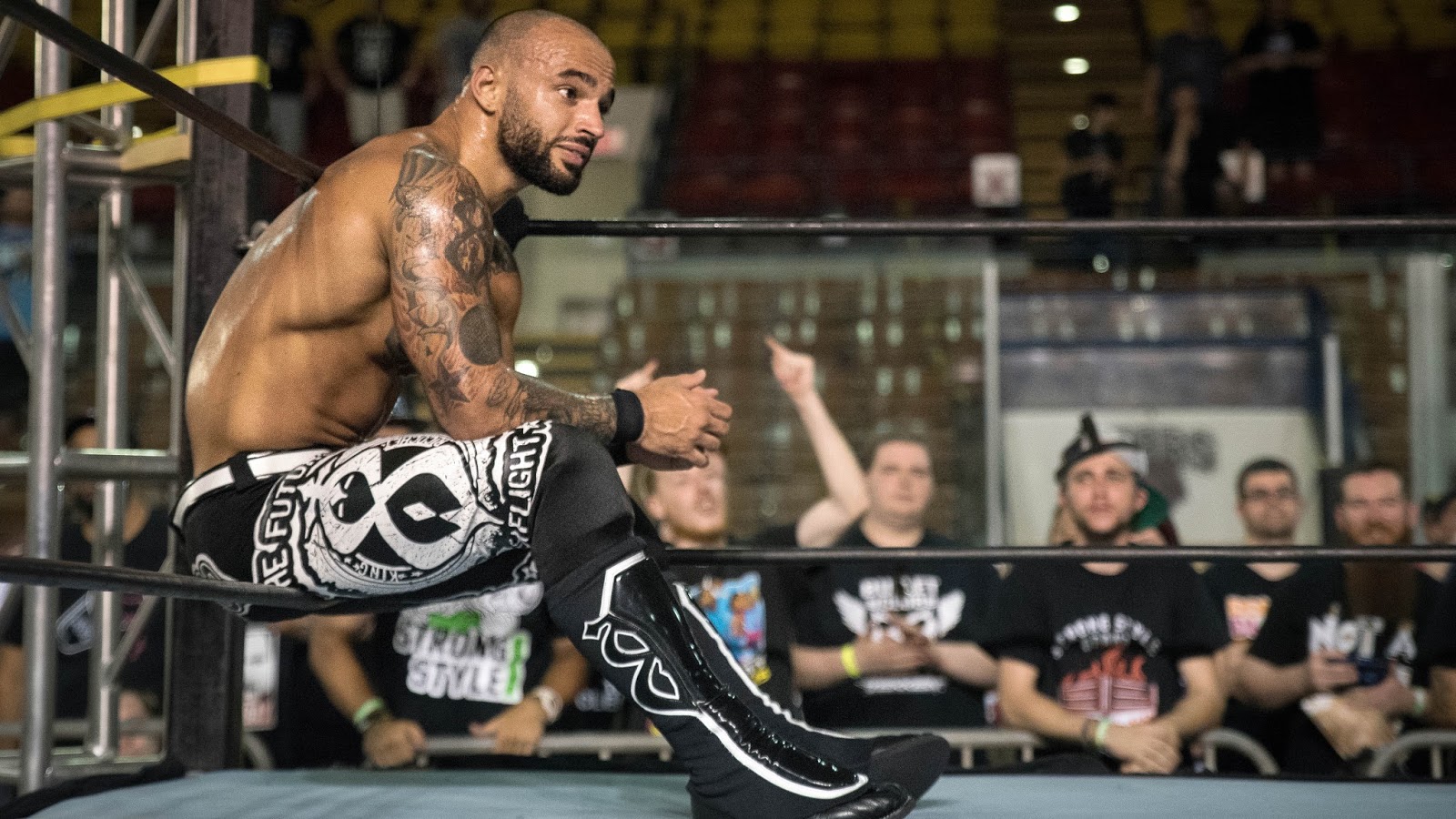 Having wrestled since 2002, she is no stranger to the ring. What’s particularly special about Candice is her toughness. Her biggest success came as one-half of the World’s Cutest Tag Team with Joey Ryan. She’s taken on male wrestlers in competition, including Kevin Owens, TJ Perkins, Human Tornado, Joey Ryan, The Young Bucks, Daniels & Kazarian, Johnny Gargano, Rich Swann, Adam Cole, Cedric Alexander, Alex Shelley, Chris Sabin, Sami Callihan, and many others. She competed in the Mae Young Classic, reaching the second round before losing to Shayna Baszler by submission.

As an avid fan of Disney, she got married to Johnny Gargano at Disneyland. She debuted in NXT helping Gargano with Andrade Almas’ manager Zelina Vega at NXT Takeover: Philadelphia. She is likely to work as a contender for the NXT Women’s Championship in the future, and she’s got all the experience and credentials to make it. There’s a lot of competition, but at least she can be there for the rising star which is her husband Johnny Wrestling.

Not exactly a new signing, as Coach was in WWE before. But what about fans who didn’t see him all those years ago? How do I adequately explain Coach to them? Well, I’ll say that Coach was always on the receiving end of jokes. It was common for The Rock to use him for comedy. He could be an annoying character in his own right. Usually it was due to his cocky grin, and a demeanor which often rubbed people the wrong way. He never knew when to shut his mouth, which got him in to a lot of trouble with some of WWE’s top stars.

I think his best work was as a backstage interviewer. He could do commentary, which is what he’ll be doing on Raw moving forward, but I always felt he was best backstage mixing it up with the talent. He made a good manager too, as he can talk for those who may struggle. Coach has never suited being a good guy though. To have him return after working for ESPN for so many years, gives him plenty of reason to be full of himself. He doesn’t need to be there, and it could help WWE if they are looking for a heel character on commentary. We have plenty of memories of Coach getting what he deserved .. and we may end up seeing more of the same in the near future.