EVENT RECAP
With Naomichi Marufuji’s absence (plus the titles being challenged for outside of NOAH), Kiyomiya and Sugiura having one match, and Kazuyuki Fujita not around, the main storyline this week has very much been RATELS vs STINGER.

Junta Miyawaki continues his quest to defeat one of his seniors, and he came very close to doing that to YO-HEY. YO-HEY, however, picked up the win (despite Junta’s reversal of one of the GAMEN-G that YO-HEY used), and confirmed on his Twitter that the “Yokohama Curse”, had not afflicted him this time, and he was fine – except his left nipple was hard to find as it was confused about the issue over the tag belts with STINGER.

However, the “Yokohama Curse” might not have affected YO-HEY this time, as it seemed to be targeting HAYATA as in a typically fast paced RATELS match against STINGER, HAYATA went for a top rope somersault, and due to the pace he hit his opponents (and Harada) outside the ring, and then slid through several chairs. Outside the ring, Harada managed to get back on the count of 19, but was sneak pinned by Ogawa.

After the match, Kotaro Suzuki and Atsushi Kotoge said that they wouldn’t be giving a title shot to YO-HEY and HAYATA. Suzuki was speaking in terms of the stock market, and said the values of the belt would drop. They also introduced a new rule as they were happy to take a title challenge from anyone other than RATELS, saying that if you could pin one of them, then you could challenge. They also introduced an “X” sign to indicate they were saying no.

Kaito Kiyomiya and Takashi Sugiura had a pre-match. Sugiura battering Kiyomiya with elbows, and Kiyomiya returning them, at one point knocking Sugiura down. After the match (in which Sugiura pinned Hitoshi Kumano), Sugiura got on the microphone and said, “Fucking kid! I am not giving any scenery or era up to you!”. Backstage Sugiura cut a grumpy promo, which could be best summed up by Grandpa Simpson’s phrase, “I’m an old man, I hate everything”.

Although Go Shiozaki has not had a pre-match with Kazuyuki Fujita at this part of the tour, he has made a point of addressing the crowd each evening, saying that as this is NOAH’s 20th anniversary he will dye NOAH his colors, he will protect NOAH and he will never let it become as Kazuyuki Fujita calls it “a mud boat”.

Junta Miyawaki got a singles win today, but it was not over a senior, he beat Kinya Okada.

HAYATA was taped up (which is unusual for him, but understandable after Yokohama) on his shoulder and ribs, fans noted that he looked to be in pain at times. Once again YO-HEY and HAYATA were unsuccessful in pinning Kotoge and Kotaro, and they made an X to tell them this after Kotoge pinned YO-HEY. Backstage RATELS came up with a plan, HAYATA, who was due to have a singles match with Haoh, would swap with Tadasuke to take on STINGER with YO-HEY and Daisuke Harada the next day in Fukushima.

Daisuke Harada has warned Yoshinari Ogawa that he can’t run from him. He had better make the title match.

YO-HEY was told backstage by Kotoge and Kotaro that he and HAYATA were not getting a title match. YO-HEY’S solution to their refusal is to say that they didn’t make an “X” properly, and therefore he is not accepting their refusal.

RATELS run of bad luck continued, with HAYATA’S injuries catching up with him in the very same arena that Atsushi Kotoge was injured at last year. Knocked outside (or else rolling outside, I am afraid I don’t have the details), he was unable to carry on and seen to by Daisuke Harada and Tadasuke, before being helped out by the seconds and to the medics office. At the time of writing, I don’t have any information as to whether he will miss time or not, but YO-HEY is of the opinion that “Wife” needs to rest and take it easy, and that the match at Korakuen next week will still go ahead. With HAYATA out of the match, this left two of RATELS facing three of STINGER, and the match came to a head with YO-HEY & Atsushi Kotoge getting counted out. Furious, Daisuke Harada grabbed the GHC Junior Heavyweight title, and held it over Ogawa. 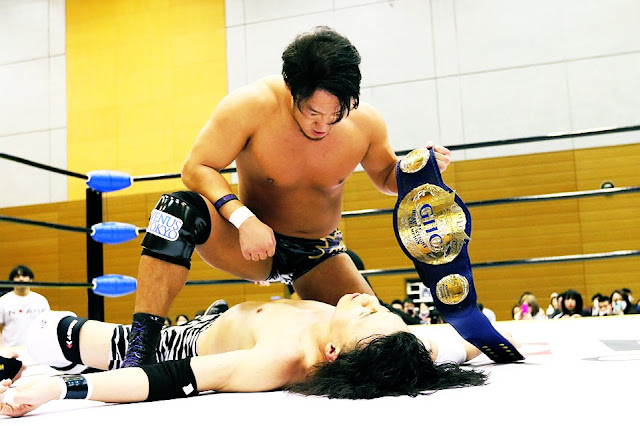 “NOAH THE DREAM 2020”
On March 15th, NOAH will hold a fan event. Event (which is somewhat Differ in the “Golden Era”) will feature a fan club photo session, flea market, a chance to mix with both wrestlers and fans for about fifty minutes, “Taniguchi’s Room” and two matches.

The two matches held on the evening will be Go Shiozaki vs Junta Miyawaki and Kaito Kiyomiya vs Kinya Okada.

ELSEWHERE IN NOAH
~ Naomichi Marufuji came safely through his operation to remove calcified bone from his knee. He has since been discharged from hospital. During his stay he was dreaming of fish dishes having to live off hospital food, and so his Twitter followers were happy to oblige with pictures. Although he will not be returning to the ring until the end of the month (he has decided on the date, not the doctors), he will be at some shows to sign autographs.

~The GinGin Boys (YO-HEY & Kenshin Chikano) will reunite for one night only on 14th March in DDT for Go Hirata’s 10th anniversary. Just so you know should you be unaware (or perhaps I should prepare you for what you are about to see), “Gingin” is a word which kind of means excitable or ecstatic, and you will probably never look at “I’m Too Sexy” by Right Said Fred in the same way again…as the gimmick is two sleazy male strippers. Fake money to stuff down their pants (should they do that side of things), will be provided.