Abema streamed the NOAH show this week on 16th February 2020 live from Korakuen Hall. Abema are being used as a platform for streaming NOAH shows, which they will also share with DDT Universe until a proper VOD is arranged. Unfortunately for those outside of Japan it is difficult to watch ABEMA as you need to find a VPN that hasn’t been blocked by their servers, and then if you do find one, you will need to subscribe to the channel. Despite this, it is said\hoped that the shows will be put on DDT Universe.

Ahead of their “Strong Climb” match at Big Japan on the 3rd March, Yoshiki Inamura faced Ryūichi Kawakami in a tag match with Masa Kitamiya and Daisuke Sekimoto. The match was dominated by the rivalry between Inamura and Kawakami, with Kawakami picking up the win. Inamura heaved himself to his knees, and pointed his index finger in a “one” sign, indicating that this was Kawakami’s one and only win over him.

Katsuhiko Nakajima and Hideki Suzuki put on a varied match, which started off as mat wrestling\MMA, turned into a out of the ring brawl, and then ended up puro style. The initial style is not one that you see much of in NOAH, and Nakajima had to reach down deep to his MMA past, and pull out a style that he seldom uses. After the ring out brawl (in which Nakajima lost his temper, stole an umbrella and attempted to use it), the match went to time out.

The GHC Junior Heavyweight champions, Kotaro Suzuki and Atsushi Kotoge, had announced that they were changing the rules of how people could challenge. They no longer would accept people challenging directly, they had to pin one of them before they would grant them a match. So today, for RATELS, was very meaningful, YO-HEY & HAYATA want to challenge for the GHC Junior Tag Titles, and Daisuke Harada has won the right to challenge for the GHC Junior, but as ever STINGER have made it difficult. 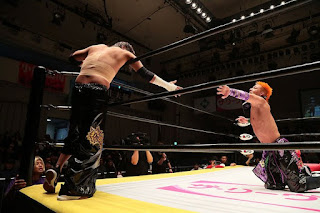 HAYATA has not had an easy time since somersaulting from the top rope, skidding on the floor and through some chairs in Yokohama on the 7th February, and today was no different. Attacked in the ring by STINGER in his ribs, Tadasuke had to take him backstage which left Harada & YO-HEY in a 3 on 2 match. However, HAYATA (followed by a frantic looking Tadasuke), came out towards the end of the match his ribs now fully taped, and managed to get a sneak win over Kotaro Suzuki. STINGER were furious and to a chorus of boos, they attacked HAYATA’S ribs until they were chased off by RATELS. NOAH have since announced that HAYATA will miss NOAH’s next three NOAH dates with bruised or fractured ribs. No title match for either HAYATA & YO-HEY vs Kotaro Suzuki & Atsushi Kotoge, or Daisuke Harada vs Yoshinari Ogawa has yet been announced.
About today YO-HEY wrote “First of all we won, but all…”

Kaito Kiyomiya & Go Shiozaki (both wearing practically the same ring wear), teamed up to take on Takashi Sugiura (who Kiyomiya is challenging for the GHC National Title) and Kazuyuki Fujita (who Shiozaki has nominated to challenge him for the GHC Heavyweight). The match was very much Sugiura vs Kiyomiya and Shiozaki vs Fujita. The exchanges between Sugiura and Kiyomiya (especially outside of the ring) were described as a “dog fight”, with Fujita and Shiozaki exchanging heavy blows. The match went to a controversial finish when Fujita choked out Shiozaki in a sleeper hold, and the ref stopped the match after 20 minutes and 29 seconds.

Fujita, however, wasn’t finished with Shiozaki. Taking a bottle of water, he poured it on Shiozaki’s head to revive him. When Shiozaki sat up he grabbed his hair, took a swig of the water, bent down and sprayed it in Shiozaki’s face before throwing both the cap and the bottle at him, before walking off.

Takashi Sugiura waited until everyone had left the ring to address the crowd. He basically said that he and Fujita, “classmates” and “old men”, would leave Nagoya with the belts.

The block is yet to be announced. 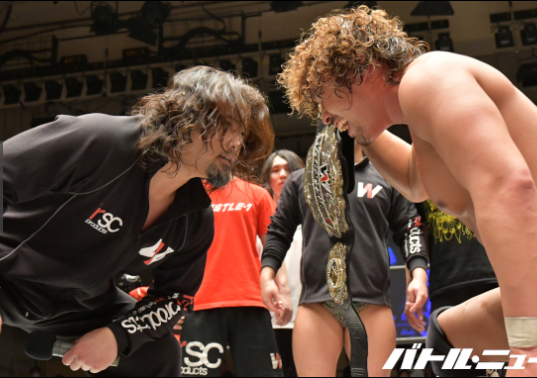 Katsuhiko Nakajima vs Kaz Hayashi
Katsuhiko Nakajima defended the W-1 title against Shotaro Ashino on the 12th February at Korakuen Hall. In usual style he didn’t bring the belt to the ring, and it had to be fetched and handed to him, afterwards he threw it out and to Kinya Okada who had come to second him. Nakajima displayed his usual sarcastic arrogance in the match, refusing to get in the ring at the start, and then at the end after his win via Vertical Spike, he threw the belt away again. At this point, fed up with his antics, practically the whole roster came into the ring to face him. Nakajima dismissed them all saying that he did not recognise any of them, but he did know one face, Kaz Hayashi.

Nakajima shoved the belt in his face and said, “I’m really sorry that you have had to come in being so busy, but my answer is yes, if you say no, then it is no.”
Nakajima got a trance kick to the face for his troubles.

Hayashi told him that his answer was that he would be the next challenger. Title match has been sent for March 15th.

Nakajima says that his appearance in W-1 is something that he wants to do and is separate from NOAH. He won’t do in a NOAH ring what he does there. He is loving being a heel.

Upcoming appearances and matches
On the 8th March, All Japan will be coming to NOAH in the form Evolution when SUWAMA, Shuji Ishikawa and Yusuke Okada come to Yokohama to take on the team of Katsuhiko Nakajima, Shuhei Taniguchi and Junta Miyawaki.

The Great Muta will be teaming with a form of Naomichi Marufuji (who is billed as “魔流不死”, which is pronounced Ma-ryū-fushi” ~ “Marufuji”. The name means “Magical Immortality”, and uses the kanji for demon), against Marufuji’s tag partner, Masaaki Mochizuki and AKIRA. Match will take place on 8th March.