Rene Dupre made his NOAH in ring debut, teaming with El Hijo De Dr Wagner Junior to take on Kongoh (Kenoh and Masa Kitamiya). While Kenoh is a heavyweight wrestler, he is not one of the bigger ones, and so was at the mercy of the more thickset Dupre and El Hijo De Dr Wagner Jnr. Dupre in particular threw him around the ring, and time and time again, Masa Kitamiya had to come to his rescue. In the end Dupre picked up the win via piledriver on Masa Kitamiya. After their first win, The Sugiura Army international vowed that this new team of Canada and Mexico would be like a whirlwind in NOAH.

In Match 2 “Muscle Toughness” (Daisuke Sekimoto and Yoshiki Inamura) took on The Sugiura Army (Takashi Sugiura & Hideki “Shrek” Sekine). This match was as it sounds both on paper and in reality, four large guys screaming and slamming into each other while they did it. Nothing overly technical occured in this match, it was full of punches, elbows, chops and kicks, the impact of which was amplified in the empty venue. The match ended with Takashi Sugiura landing the Olympic Slam on Masa Kitamiya.  It had not been a good night for Kongoh.

Muscle Toughness returned the next day on April 10th to take on The Anti Wrestlers Alliance, and they were ready for them, and the way they like to ensure victory, when Daisuke Sekimoto slammed Masao Inoue and took the pin, with Yoshiki Inamura keeping Akitoshi Saito out so he could not get the save. Match took only 3 minutes and 19 seconds. Backstage Inamura  commented that he might not have Sekimoto’s muscle, but he did have momentum, and that would see him through.

In a big match, and one that was more suitable to Kenoh, Kongoh took on Kenoh’s paranoid android enemy, Naomichi Marufuji (i.e. MochiMaru).
The moment the bell went Kongoh attacked, but Mochimaru had done their research and come up with a plan to keep him down and keep him dazed; work on his legs so he can’t kick, and work on his head so he is dazed. Mochizuki felled Kenoh with a headshot (which the referee had to check on), and Marufuji and Mochizuki tagged in and out working on his head and his legs successively. Marufuji also kept Kitamiya out of the ring.

Naomichi Marufuji fought against Masa Kitamiya, and later wondered just who this guy was? Kitamiya refused to go down, not being cowed by chops, or the audible crack when Marufuji hit him in the face with a hook kick, he breathed heavily and snorted.

The end came down to Kenoh and Mochizuki, their partners doing their best to keep each other out of and away from the ring. A Kick war broke out inside between them, as outside you could hear Marufuji and Kitamiya chopping each other.
Then Kenoh really caught Mochizuki with a kick around the head making a noise that sounded brutal an an empty arena, Mochizuki dropped to the floor, the referee ran to check, and the match ended in a TKO with Kenoh holding his fist up victorious, which was something he used to do after defending the GHC Heavyweight title in 2018. 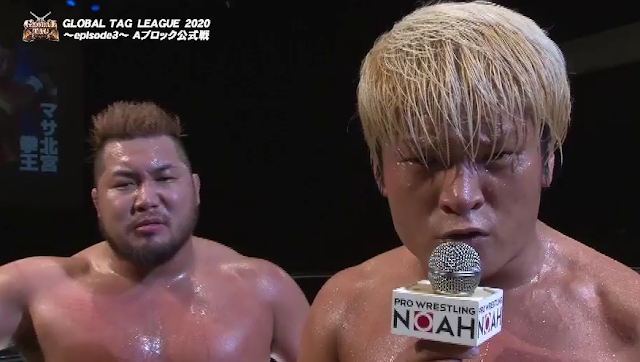 After mocking his hated enemy (Marufuji), Kenoh addressed the audience at home with an intense rant, they weren’t going to give up, the champions couldn’t stimulate NOAH’s ring and only Kongoh could do that. He ended with telling all you assholes to follow Kongoh.

Coronavirus Update
Due to the ongoing pandemic venues in Japan have announced that they are closing for the duration, this has put a strain on several promotions who were hoping to hold empty arena shows. NOAH will be holding their 18th April (Global Tag League final) & 19th April show at Korakuen Hall. At the time of writing they have not announced any cancellations.

“Endless Love Vol.2”
Katsuhiko Nakajima and Go Shiozaki held the second in their videos to promote the new AXIZ Photobook “Silver” which will be released next week via the official NOAH shop, (please note they do not ship internationally, so you will need to arrange shipping via White Rabbit or another source).

Prior to the video going live on the official NOAH YouTube channel, Katsuhiko Nakajima held a live Instagram session of the photoshoot. I will write up Vol.2 in due course (Vol.1 can be found here), but for now, here is a recap of the Instalive event.

April 18th at Korakuen Hall (Global Tag League finale) will be an empty arena, but will be broadcast live on DDT Universe and Samurai.