Home Articles Where Are They Now? Remembering Gangrel. Hi everyone! Continuing this series with Gangrel. You can read the first installment at the following link: Where Are They Now? Remembering Perry Saturn.

I remember tuning in to the WWF in the late 90’s and seeing this strange, yet appealing man dressed in white. I knew nothing about him, but it was obvious he wasn’t drinking real blood. That part never impressed me .. it was all about the entrance and his finishing move. To this day I can’t help but listen to “Blood” every now and then, just to get the nostalgia trip.

It’s funny because I always thought Gangrel was a really big character who would go on to challenge the popular names down the road. I didn’t care about the lackeys .. I wanted to see the vampire warrior win a title. It never happened though .. and for good reason. Those who followed the vampire became stars all on their own.

In 1987, David Heath completed wrestling training with Dean Malenko’s father Boris Malenko. After debuting in 1988, Heath became a tag team champion in different promotions, including Stampede Wrestling. Luna Vachon joined his tag team on the road, and soon enough the team split as she was married to Heath’s tag team partner but they’d fallen for each other. Heath and Luna married on Halloween 1994, and part of it was broadcast by the WWF where she worked at the time.

Luna and Heath worked on his new gimmick, a vampire warrior inspired by the movie “The Lost Boys“. He saw some singles success in the indy scene before being signed by the WWF. From 1994-1995, he worked as a masked enhancement talent known as the “The Black Phantom”, and lost matches to most of the big names on the roster before being released from contract. 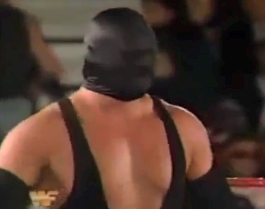 After being released, he showed up in ECW for a little while to have a program with Tommy Dreamer. There’s not much detail between 1996-1997, from what I found he continued to wrestle for ECW and IWA-MA sporadically til he signed a contract with WCW in 1998. He wasn’t there long, as he got one chance to show his skills on WCW Worldwide in a tag team match against the Faces Of Fear before WWF came knocking again.

He was hired back to WWE as Bruce Prichard and Vince Russo saw potential in the vampire gimmick. They made tweaks like having him rise from a ring of fire while holding a chalice of blood. He’d also drink the blood and spit it into the air before a match. Edge took interest in his Raw debut as he took on Brian Christopher.

Gangrel recruited Edge & Christian shortly afterwards to form The Brood. Together, they would perform ritualistic “bloodbaths” in the ring. They joined The Undertaker’s stable The Ministry Of Darkness along with the The Acolytes, Viscera and Mideon. One of the biggest moments of their careers was aiding The Undertaker in hanging The Big Boss Man from Hell in a Cell at Wrestlemania XV.

Gangrel got his first title shots by participating in the Royal Rumble twice, and challenging X-Pac for the European title at the 1999 Royal Rumble. The Brood turned on The Undertaker after he ordered Gangrel and Edge to help sacrifice Christian for giving Ken Shamrock information.

After leaving The Ministry, The Brood turned their attention to The Hardy Boyz and Michael Hayes. They also fought against the Corporate Ministry around this time. On an episode of Heat, Gangrel turned on Edge & Christian. Later on Raw, The Hardy Boyz turned on their manager and joined Gangrel to form The New Brood.

They feuded with Edge & Christian over the services of Terri Runnels in the “Terri Invitational Tournament”. The Hardy Boyz won in a ladder match which got them a standing ovation. The next night on Raw, the two teams showed respect to each other before turning on their former leader Gangrel. It was the last major appearance for Heath, as he was relegated to Jakked and Heat through 2000 before being released in 2001; reportedly due to issues with his weight.

To this day Heath continues to wrestle around the world. Since 2001 he’s worked for All Star Wrestling in the UK, Chikara, and many other events such as the Hulkamania Australian Tour. He returned to WWE in 2004 with Viscera to take on The Undertaker in a handicap match. They lost the match, which earned Heath an OVW contract .. but was still released for unknown reasons. Once again, he was re-signed to WWE in 2006 to potentially partner Kevin Thorn & Ariel in a vampire stable, but the company questioned his weight and relegated him to Deep South Wrestling. He was released again the next year.

The year he was released, Heath directed 12 pornographic films under the Vampire Warrior ring name. He starred in The Human Centipede 3 (Final Sequence) movie as a prisoner in 2015. The same year, he sat in attendance to support his friend Rikishi at the WWE Hall Of Fame. His last appearance in WWE was a cameo in the 10th episode of Edge & Christian show which aired last year. He is also credited in training Alexander Rusev with Rikishi at the Knokx Pro Wrestling Academy.

At the age of 48, the Vampire Warrior will continue to drink blood and take names at sporadic events. I’ve always been a fan of Gangrel, my only irk being that he didn’t try hard enough to stay in shape .. otherwise he might have achieved something in WWE. He had the look, he had the entrance, he had the character, and the finisher .. so his ring work is what let him down in the end.

I guess .. his character wouldn’t suit WWE’s PG product so there’s no chance of seeing him back as a manager. I think he can live the rest of his life knowing he was instrumental in the careers of Edge & Christian, The Hardy Boyz, and Rusev at the very least. He gave them a platform to succeed, and I’m sure they are grateful. Will we ever see him in the Hall Of Fame? It’s hard to say. He didn’t achieve enough to be in there, but he’s remembered all the same. Thanks for reading, I’m signing out for the night.