Home Articles The “Paige” Turner: This Is My House The Journey Of Paige And How She Went From The Top Of The Mountain To Her Career Going Down-Spiral.

Charismatic, in-ring talent, decent mic-skills when given time, the entrance music, first-ever NXT Women’s Champion and one of the longest reigning in that brand’s history behind Asuka, at 21 years old became the youngest WWE Divas Champion of all time. Now, as I sit back and look at all of that plus much more that went un-mentioned, I must wonder, what the hell went wrong? Paige went from ushering in the Women’s Revolution to being one of the first women to possibly exit out of it. I’m not going to bash Paige for her decisions because at the end of the day these athletes we look at on TV every day are human as well and they do indeed mess up. But, with Paige there still is and was so much potential and it’s a shame that we may not get to witness her show why in an era of women’s wrestling where they show exactly what Paige said every entrance: This Is My House

There are many of pro-wrestlers who started wrestling at an early age, but Paige started at the age of 13 under the name Britani Knight teaming with her mother who is also a former in-ring competitor. I did not know of Paige during the early stages of her career but anyone that makes a decision to choose pro-wrestling at the age of 13 years old and follow through with it has my respect.

Fast-forwarding to 2011, this was the match that was reportedly said to have put the young “Britani Knight” on the map giving her a name in the Pro-Wrestling EVE promotion as well as in her hometown of Norwich, England. Paige went on to capture the Pro-Wrestling EVE Championship and although that may have been a monumental moment for her, little did she know that she would be a part of a revolution in the form of a Takeover. For those who do not know, before NXT was brought to fruition, there was FCW (Florida Championship Wrestling) and that is where Paige slowly came into her own. From the beginning of Paige’s time in FCW, there was always something that made her stand out from the rest of the Women competitors on the roster. Paige was not your typical WWE “eye candy”, did not look the part as some would say but that is what made Paige, Paige. The Norwich product would go on to start a revolution within being a part of one, the “Anti-Diva” revolution. The Anti-Diva movement wasn’t a revolt against Women’s wrestling, but Paige was simply tired of women’s wrestlers being categorized as anything less than what they were. Not knowing Paige at all, I can as well as most of you could guarantee that the “Anti-Diva” movement was not kayfabe and all real feelings by Paige. The Anti-Diva would go on to carry herself into the re-branded FCW, NXT.

Although Paige may have gone down in defeat her NXT debut, that would only be a minor bump in the road to her becoming the NXT Women’s Champion. Paige went on to face a character developing Sasha Banks, Emma & Alicia Fox just to name a few of the women Paige competed against in NXT. The WWE fans became very fond of Paige. I remember I would have to watch episodes of NXT on Hulu Plus and would use my grandmother’s credit card to do so, but all in all this is how I noticed Paige wasn’t your ordinary “WWE Diva”, in fact she was the complete opposite. I was not as informed about the company as I am now, but Paige had the potential to main event a show; she had the in-ring talent, her popularity among the fans was a draw as well and putting her in the ring with someone who could match her would be nothing short of a classic.

Heading into June of 2013, Paige was entered into a Women’s tournament in NXT to crown the inaugural NXT Women’s Champion. Paige defeated the likes of Tamina Snuka and Alicia Fox to ultimately lead her onto going one-on-one with Emma to determine who would usher into a new-era as the first-ever NXT Women’s Champion. 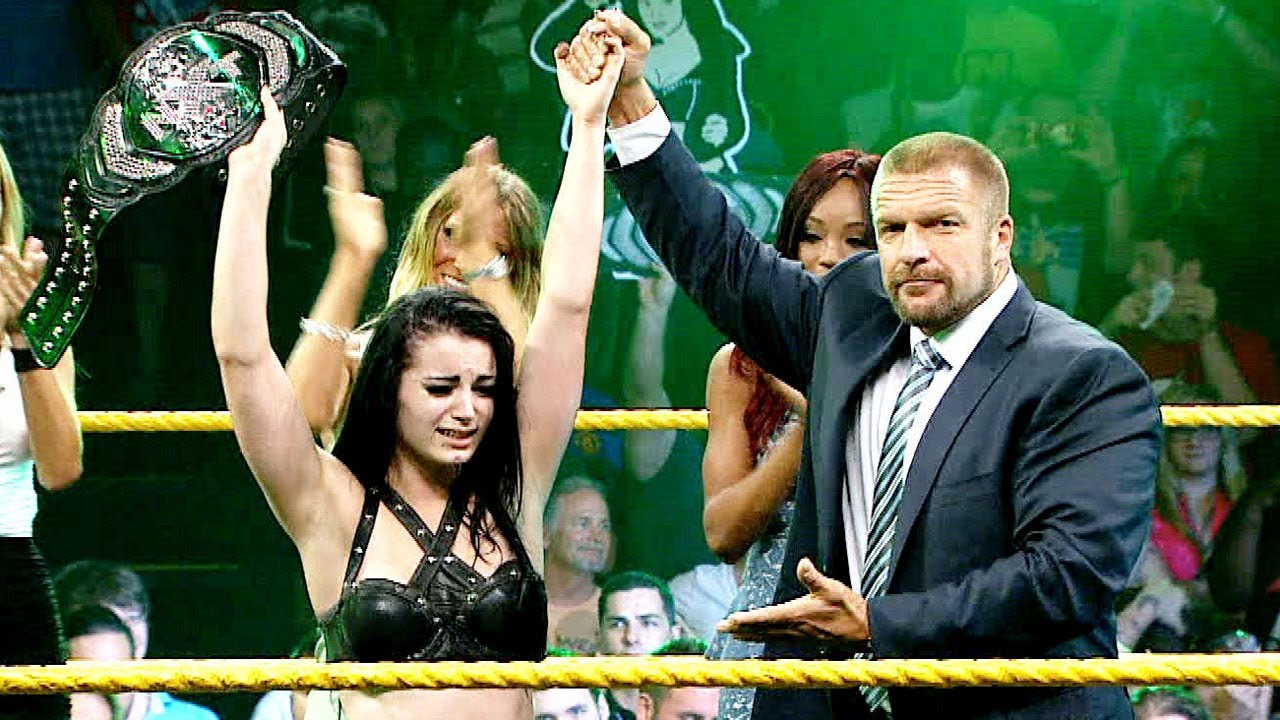 Following a night where we saw Daniel Bryan capture the WWE World Heavyweight Championship, another success story came to fruition. The story of a 13-year-old who chose wrestling as job and eight years later all of her hard work would pay off. I want those of you who are reading to do me one favor, as you watch this video turn your headphones/earbuds all the way up and just listen.

If you were not aware of Paige, this was her breakout moment. A 21-year-old Norwich England product is the new WWE Divas champion and although Paige was now the holder of the Divas Championship, she was a Women’s Champion. Weeks later, Paige was forced to relinquish the title to JBL and he “bullied” her to get the championship (I had to take the cheap shot while it was there). As Paige became a regular on WWE television, people became critical of WWE creative for not being able to develop Paige’s character as she was the “weak champion” at the beginning of her time in the WWE. Paige was constantly proving herself much like how Sami Zayn does today. I must agree in regards that Paige’s gimmick from NXT, “The Anti-Diva” was no longer that and although she was a baby-face champion, that did not mean she had to be booked as a pushover champion.

Fast-forwarding to the early stages of 2015 was where we slowly started to see the decline of one of the company’s most talented workers. Paige made her WrestleMania debut at WrestleMania 31 and picked up a victory alongside AJ Lee in a tag-team match. Little did we know, this would be the last time we saw Paige pick up a victory for a while. Paige would go on to lose match after match and just when she would get close to winning the Divas Championship once again she would always fall short which of course made fans of hers upset but those who critiqued the product heavily asked why isn’t Paige being pushed as the best competitor on the Women’s roster at the time, thus the Anti-Diva was gone.