Hello! Today I am talking about political correctness and how it affects WWE. I feel like it’s a subject we should discuss and understand, because there seems to be a divide. What I’ve seen is a demand for edgier content, while some fans become disenchanted when WWE tries something risky. When WWE crosses the line it’s normally met with a critically mixed reaction. I will provide examples of incidents out of their control, and other moments which they planned beforehand. Some of the examples are controversial and do not represent the sites (or my own) views.

When WWE talent make remarks not considered politically correct, there’s an uproar on social media. The company has to come forward and make a statement of apology, and to stress they’re characters on a TV show and do not represent the views of the company. When WWE tries to be edgy like the 90’s, it’s difficult because they can’t get away with the content. I found a few recent incidents which shows how they have been affected, and what they do to counter it. Sometimes they get it right, other times they don’t.

In 2013, Jack Swagger introduced his new manager Zeb Colter, a man who was patriotic to the point he couldn’t stand immigrants and others who defied what it means to be American. A few saw this as offensive, despite his job being to garner heat with his controversial views. They took to social media and labeled Colter a racist, and chastised WWE for allowing his views on television. Jim Ross responded to the comments with the following:

“Getting lots of Tweets regarding Zeb Colter’s politically based comments and many feel that the comments are untimely. Isn’t that what wrestling villains do, make inflammatory, controversial comments that strike a nerve with the audience? Same type of comments are made daily on a variety of news outlets so I’d suggest to the most vocal of critics to simply, ‘Lighten Up Francis.’ Zeb’s TV persona is that of a political zealot who has controversial opinions. Zeb…if that is his real name.”

Only a year later, WWE came under attack when it was implied Lana referenced the recent Malaysia airlines tragedy. While the timing was a little insensitive, I don’t think WWE purposely went out of their way to create controversy from the promo. Some news outlets made it out like Lana was being anti-American and were “outraged”. WWE was forced to issue the following statement:

“Last night’s segment during WWE’s Battleground event was in no way referring to the Malaysia Airlines tragedy. The storyline with characters Rusev and Lana has been a part of WWE programming for more than 3 months. WWE apologizes to anyone who misunderstood last night’s segment and was offended.” A recent example shows Jinder Mahal using Japanese stereotypes to refer to his challenger Shinsuke Nakamura. The fact WWE had him go this route shows they didn’t have enough material to get heat, so they had Jinder focus on his nationality. While some will see it as cheap, I think WWE wants it to be part of his growing character. For months Jinder called out the WWE Universe for judging him based on the colour of his skin. He would tell them they probably think he’s a terrorist, and he’d speak in Punjabi to address his people.

So what he did was exactly what he blames the WWE Universe of doing. It’s going to strike a nerve, and not totally because it’s racist (Shinsuke had to accept it before they worked on it), but because it’s hypocritical. I found it helped garner sympathy for Nakamura. Asian wrestlers have struggled to make it in WWE in the past, and I feel like his promo was a nod to how Japanese wrestlers have been treated. One day Nakamura will rise and be accepted by the WWE Universe as its champion, and it will be done by beating the hypocritical Maharaja. It’s as good as they’re going to get for this feud.

Five years ago there was a manager called Abraham Washington who stood at ringside to aid The Primetime Players. He often got on the microphone and threw insults at the opposition like hand grenades. However, one night, he went too far and it blew up in his face. He decided to make a Kobe Bryant joke, and immediately WWE went full-defensive. They apologized for the line, and stressed that something would be done about it. Abraham publicly apologized too. A couple of days later, the subject was brought up on a Facetime session on ESPN. The columnist criticized the company for how they handled the incident; despite the poor joke. Just over a week later, Abraham was fired and he went on a Twitter rant stating how unfair it was. WWE ended up suspending his account and nothing came of it.

While I completely 100% agree the line was inappropriate, something else had to have happened to make WWE fire him. Perhaps the criticism on how they handled it contributed to their decision to release A.W? He was a colourful manager trying his best to make The Primetime Players entertaining, but he seemed to let his colourful nature get the better of him. I understand why some were upset, but I don’t understand why WWE didn’t give him a chance to prove himself. Linda McMahon was looking to run for US Senate, so it may have had something to do with maintaining the reputation of the company so her opposition couldn’t use it against her. 3:29 for the tasteless remark.

I feel like TV shows need to touch on controversial subjects sometimes as it opens up a dialogue to further understand and educate. However, WWE often chooses not to risk being controversial as the repercussions could be more damaging than they’re worth. I feel like they want to, they want to have freedom so we don’t get the same old thing, but they know that it’s so easy for something small to grow and become a big deal through social media. WWE is then forced to explain the story line and apologize publicly.

And this is why WWE will likely remain PG rated. I can’t see them reverting back to the 90’s when almost anything could be put on TV. Teens & kids watching The Attitude Era have grown up and wish for edgier content as that’s what drew them in. They appreciated sexy girls, violent acts, bloody battles, controversial moments with hints of religion, racism, sexism, and many other things because you couldn’t see it anywhere else. It’s not that they condone these acts, but because they accepted the stories and didn’t have anywhere to express their displeasure. Characters seemed more three-dimensional and diverse compared to what we’ve seen in recent times.

In this piece I’ve done my best not to be too controversial, but if I happened to offend anyone then I apologize. I didn’t make it to be offensive, I made it to open a dialogue so we can better understand the times and what is or isn’t offensive to those who watch. The most important thing is we realize that WWE is a TV show, and sometimes we shouldn’t be disgusted if a character isn’t PC. If anything, we should be thanking the writers for trying something new. I’m not a fan of shows being racist, sexist (etc.) for the sake of it; there has to be an underlying message that doing this is wrong and the talent who is guilty of these acts should be punished in the long haul. It should be used to teach a lesson in humility and not to judge others unfairly.

And as much as we want to protect the children, I like to think people who grew up watching Stone Cold Steve Austin get crucified by The Undertaker don’t have any long-lasting mental scars. I’d like to see edgier content, but not if it’s going to alienate the fans. Thanks for reading, and see you again soon for something less heavy. Cheers! 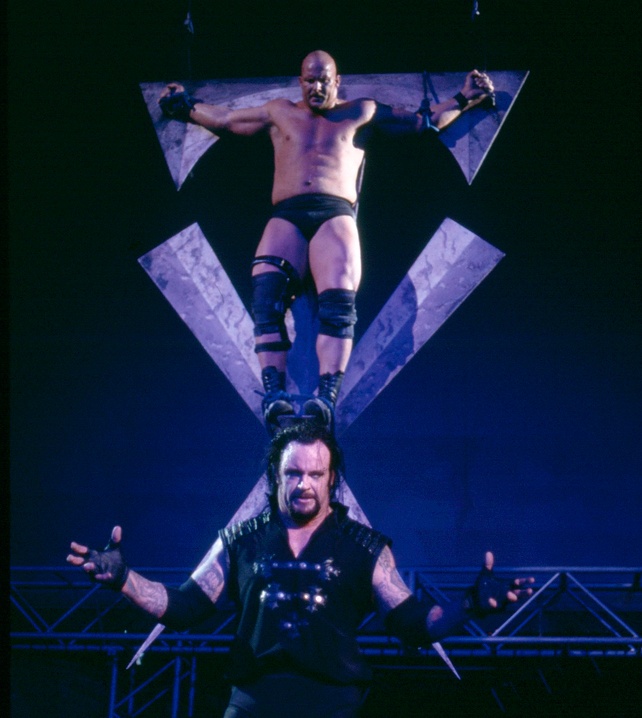 10 Interesting Things to Look for During Royal Rumble 2020 Event