Home Articles Random Thoughts & Opinions: The Magic of the “Mark Out” Moment.

When I decided to start writing articles for this website I mused over several possible topics
that I could write about; this article comes from one of those ideas I
discarded initially (not because it was bad but because I felt it needed
more thought).I genuinely believed until recently that the last time I
“Marked Out” was quite some time ago; excuse me for not mentioning the
moment now but I will be covering it later in the article.

I had
honestly started to believe that those great moments of surprise that
define many’s favorite memories of wrestling were becoming a thing of
the past; we’re all so much more connected in our world today through
the internet and smartphones that it’s become common that if a wrestler
scratches his arse in Milwaukee then a guy in Manilla can see a photo of
it within minuets if not seconds. What kept wrestling so much fun over
the years was the unpredictability of certain events; and while it’s not
solely a result of our world changing around us in that way, there are
other factors such as the death of the territories, WWE’s main
competitors (such as WCW/ECW) and the effect those events have had on
the size of the recognizable talent pool for example, it is certainly a
big factor. This doesn’t just apply to wrestling; but it certainly has a
more detrimental effect when it comes to it.

Suspension of disbelief is a
key component of watching professional wrestling; I, like many of you,
caught the wrestling bug as a kid and have remained a fan into my adult
life. We know wrestling’s fake/predetermined/fixed/whatever but we don’t
care; it’s an art form of entertainment just as valid as film or the
theater. Yes as a kid the line is a bit blurred; but, as you stick with
it into adulthood and “smarten up”, you learn how it works and you
appreciate it on different levels. Whenever I’m met with the question
“How can you like wrestling; it’s fake?”; I answer something along the
lines of “You know Robert Downey Junior isn’t really putting on a
robotic suit and fighting crime yet you still enjoy those films; it’s no
different”. Wrestling is sports based theater yet it isn’t received as
such by those who are not fans; which is a failing on their part. As a
student of the theater there’s a very highbrow argument I could make
about wrestling being truer to theatrical principles, especially those
of the German practitioner Bertolt Brecht (relax; I’m not going to do it
here. Though it could be the basis of a future article…), than
something like “Mama Mia”; but people being snotty about wrestling is
one of those things you learn to put up with as a fan.

That’s what makes
the “mark out moment” so special; we like to think that we, as smart
marks, know what’s going on to the extent that we can make informed
predictions about what is going to happen. But, just once every so
often, wrestling throws up that moment that either none of us saw coming
or plays off our suspension of disbelief so well that it truly shocks
us; moments like Seth Rollins’ heel turn on last Monday’s Raw. Who can truly say, hand on heart, that, after what happened at Payback and how strongly The Shield had been put over in recent months, they saw that coming? And that’s what made it magical; and is also the moment that brought me back to my initially discarded idea.

So come with me as I look at a personal list of “Mark Out” moments and examine why they worked or didn’t work; I must stress that this is a personal list. In no way am I ranking these moments or saying that they are the greatest example of those types of moments; but they’re the ones I remember the most and can talk about in greater detail.

Let’s start with two that didn’t work so well…

The Debut of The Gobbledy-Gooker, Survivor Series 1990. 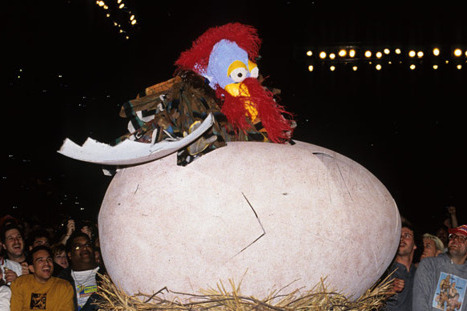 This moment fell flat for a plethora of different reasons; but I think it’s mainly because it was hyped up so much in the build up to the event. While I accept that the WWE was a different beast in those days; even as a six year old watching this unfold I felt extremely let down. But it qualifies as a “Mark Out” moment because who amongst you reading this can honestly say that when the massively hyped egg hatched you expected it to be poor Hector Guerrero in a turkey costume and that he’d proceed to dance a jig with Mean Gene Okerlund? Though a shameful moment in wrestling history and nowhere near as effective as the many example I will give for good “Mark Out” moments; it deserves it’s recognition as such simply for being completely unexpected (even though it was completely stupid).

Poor “Diamond” Dallas Paige took a buyout on his Time-Warner contract because he wanted to be a part of The Invasion angle so badly; he’s such a positive son of a gun that it’s hard to imagine him being disappointed when presented with this storyline. But you’d have to think that even his reaction upon hearing it was “Come again?” I feel this one was ineffective because it wasn’t used right and the logic was off; why in God’s name would Paige (married to Kimberly at the time) stalk ‘Taker’s far less attractive wife for one? While the reveal of DDP could have been a real shot in the arm to The Invasion (remember; to this point we’d only really seen guys like Mike Awesome and Lance Storm attack WWE guys); the fact that there were stars in WCW with bigger marquee value than him was always going to undermine it. Plus, as with the entire Invasion angle, the fact that nothing meaningful came of it and Paige was quickly destroyed by The Undertaker during their feud just makes it all the more disappointing in retrospect. I honestly believe that, because they didn’t play up the obvious mind games aspect of the angle, that being perceived as the creepy stalker guy did more to harm Paige in the minds of WWE fans than anything else. So while this was a “Mark Out” moment; you have to put it in the cheep pop catagory simply because of the way things played out.