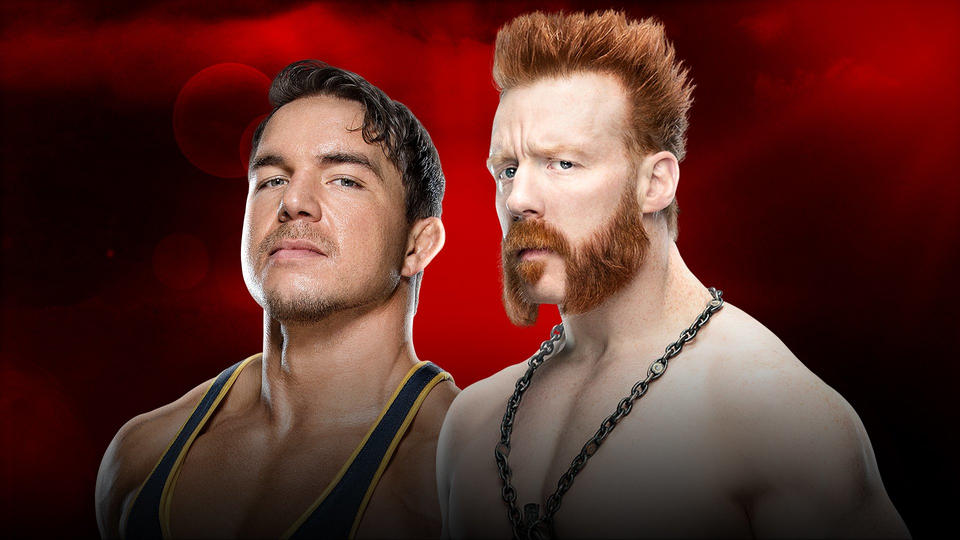 There really isn’t much to this feud, other than that it is your stereotypical big guy vs. little guy story. I’d think they have something better for Sheamus in his return, but alas, we are stuck with this. I am also still not on the “Shorty G” bandwagon. He’s a great performer, but I can’t take you seriously if you dress like an 8 year old basketball player with a nickname sounding like a show from Nick Jr. This match just doesn’t really need to be at the Royal Rumble. 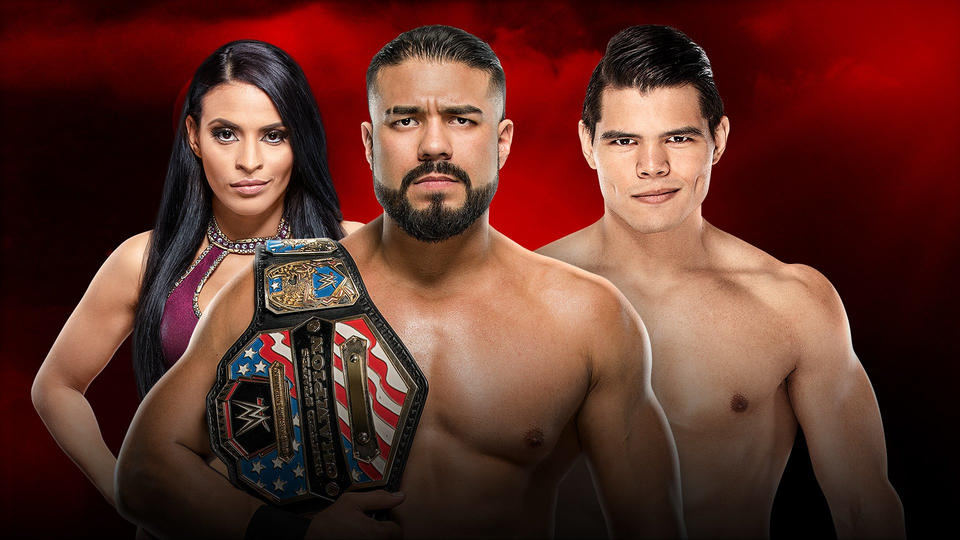 So Carrillo gets a title match just for staring down Andrade after a match, but Braun Strowman doesn’t get an Intercontinental Championship match after defeating Nakamura twice? Whatever.

This may be the start of a slow build for Humberto to be WWE’s next big Latino star. Personally, I believe the in-ring work is there, but he needs time to develop his character. He doesn’t connect with me beyond the ring. But there’s plenty of time to work on that. I don’t suspect Andrade will be losing his title this soon. I just hope that WWE gives them time to work a competitive match. 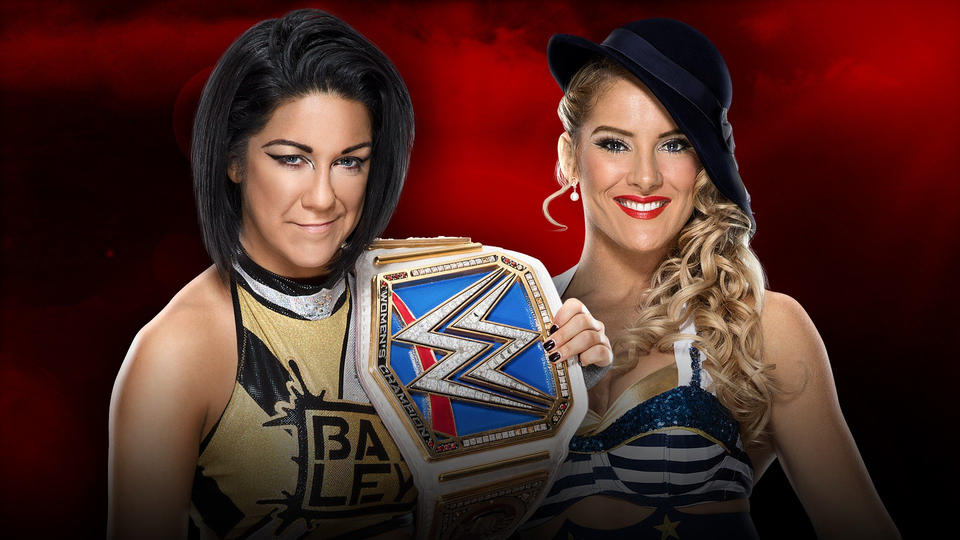 Seeing Lacey Evans as a face challenging for a championship just feels so wrong. Evans’ character fits that of a heel that much better. I just can’t get behind her as someone I’m supposed to cheer. The in-ring work also leaves a hell of a lot to be desired.

On the other side, it feels like forever since I’ve seen a match with Bayley that made me appreciate her in-ring talents. She certainly isn’t going to get there with Lacey. Building up a match with the challenger defeating the champion essentially gives the finish away. Therefore, it should be clear that Bayley is retaining here, by hook or by crook. 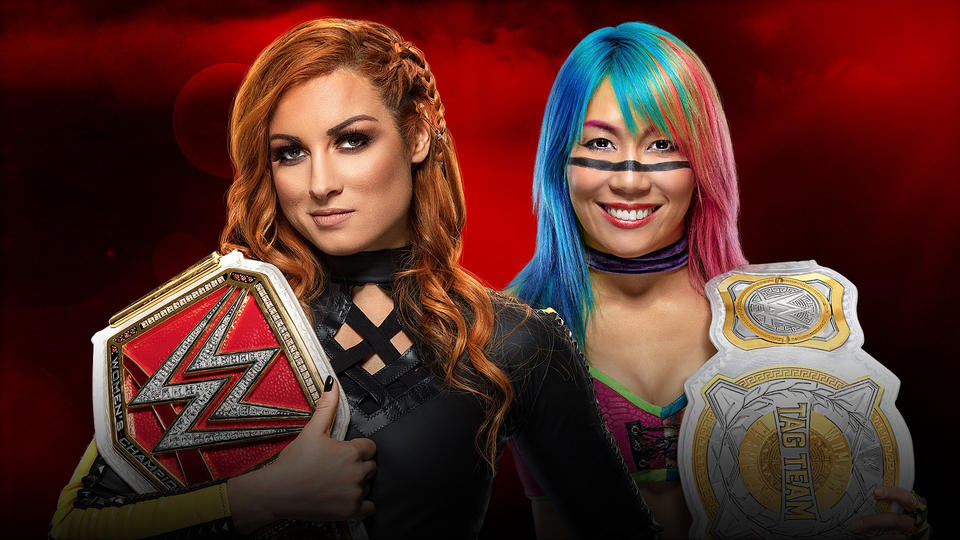 The story of this match basically writes itself. Becky Lynch has established herself as the top of her division and has proven to be unstoppable. The only time she’s vulnerable is when she’s in the ring with Asuka, as she has yet to score a decisive victory over her. And now, Becky looks to collect one lone, remaining debt.

While the feud hasn’t reached the emotional peak I thought it could reach, the story told is as basic and effective as it gets. I love Asuka trash talking Becky in Japanese. That’s all I will say about that. Overall, I can’t think that Becky has been thinking about a loss from their match at the Rumble last year only to lose in the same situation one year later. I’m calling this the match of the night, and I believe it will come with Becky collecting on that debt. 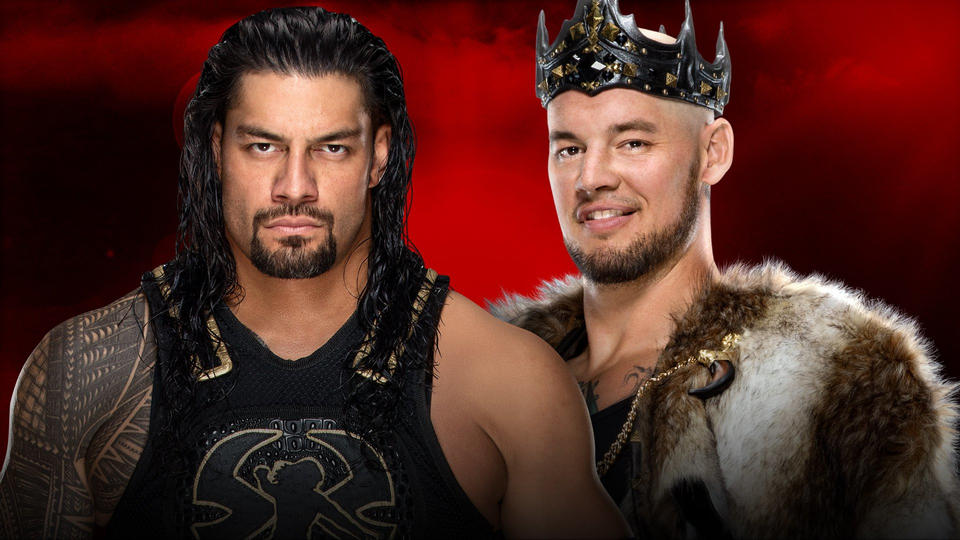 This feud is beyond redundant at this point. The two have been feuding since well before Survivor Series for supremacy over who’s the top dog on SmackDown. Since then, Corbin has defeated Reigns twice and Reigns eliminated Corbin at Survivor Series even though they were teammates. I don’t know why they are still fighting, but I’m tired of it. I’m tired of the dog food, the handcuffs and the same generic promos from each man.

The only saving grace this match has is that it will hopefully force both men to move on from each other. King Corbin has been an overall failure as a character and it seems like Reigns has been in flux since his return from leukemia. I can’t imagine Reigns losing to Corbin AGAIN, so let’s hope Roman wins and ends this once and for all. 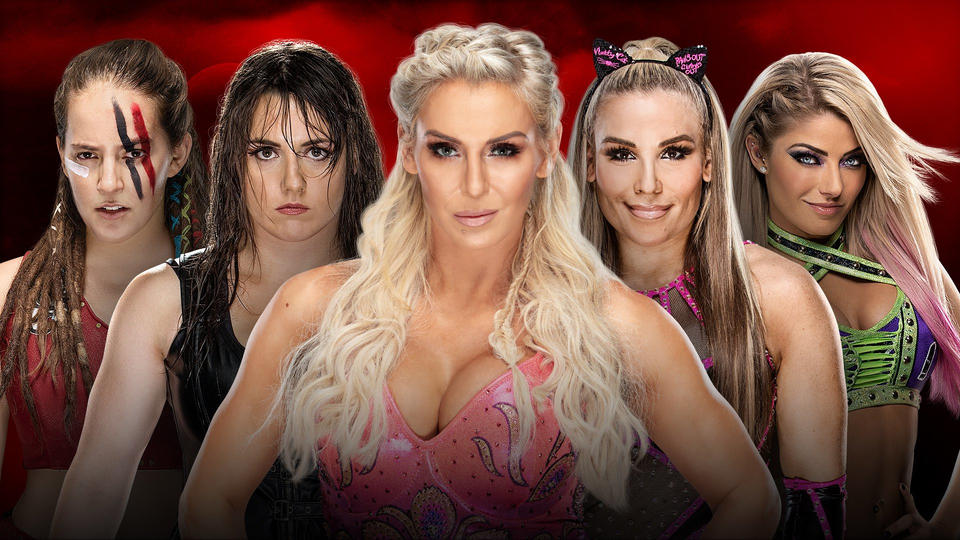 You see the women in this graphic? These are the only women to have officially declared for the Rumble match. Compare that with how many you will see in the men’s graphic, and you will see how much WWE cares about the women’s division as a whole at the current moment. The excitement for this year’s women’s rumble isn’t there like it was in past years. However, there are a number of routes that WWE can go.

First, we should address the possibility of returns in this match. It has been rumored that Naomi, Nia Jax and Ruby Riott are three prime candidates to make a return to the Royal Rumble. I don’t know how much help they’ll be to both women’s division, but lord knows that it needs a shot in the arm of some kind.

One of the favorites in this match is Charlotte Flair. Flair was the first to declare, and since she’s Charlotte Flair, she can always weasel her way into a title match whenever she pleases. Why? Because she’s Charlotte freaking Flair. However, history (as in last year) has shown that she doesn’t need a Royal Rumble win to get a title shot at WrestleMania. Flair has been in a women’s championship match at WrestleMania every year since being called up to the main roster. If there was any year it could possibly end, it would be this year. But I’m not counting on it.

Next, there are the possibilities of other candidates winning. One name that has been thrown around is Shayna Baszler, and I believe this is the most likely outcome. After losing the NXT Women’s Title to Rhea Ripley, there really isn’t much for her to do in NXT anymore. I believe she will finally get her call-up and win the Rumble to challenge Becky. It makes sense to follow up on their encounter at Survivor Series where Shayna won, but didn’t defeat Becky for the championship. The Rumble would be a great way to follow-up on that.

The other possibility is Ronda Rousey, as Triple H had confirmed that Rousey will return. We just don’t know when. However, this story writes itself as easily as Becky vs. Asuka does. Becky pinned Ronda for (technically 2.5 seconds) in the main event of WrestleMania last year. Rousey hasn’t been seen since, and returning a year later to get the one on one matchup we were supposed to get at Survivor Series 2018 finally happens. Becky seeks the ultimate validation and Ronda seeks retribution.

There are many different possibilities, but as of right now, I am going with Shayna Baszler winning the whole thing. 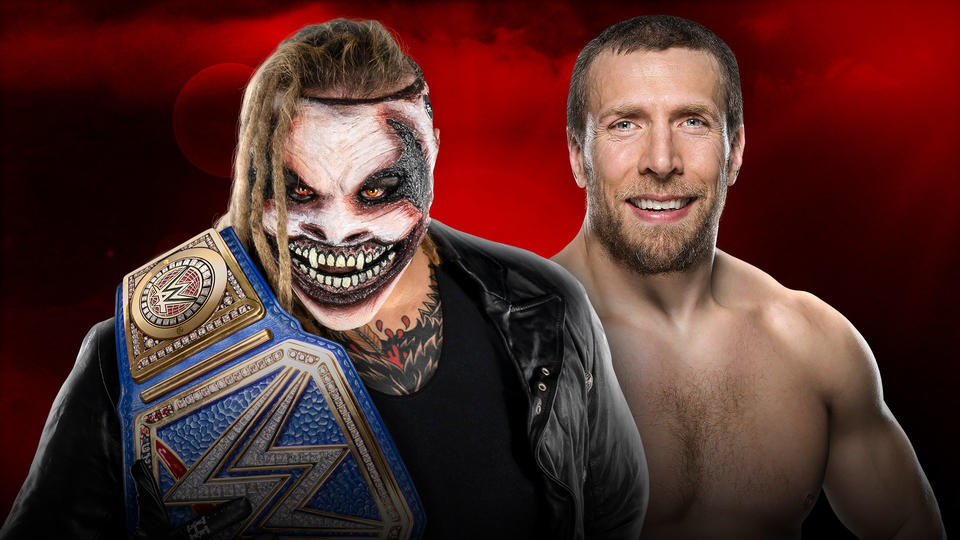 Here is what I don’t understand. The Fiend has no-sold hundreds of Curb Stomps, being thrown into production areas, multiple chair shots to the face and other attacks that would take out 99% of the roster for the count. Bearing all of that in mind, exactly what is a piece of leather going to do to The Fiend?

WWE has sort of booked themselves in a corner here. The Fiend has shown to be impervious to a great degree of physical damage, and we truly don’t know what it will take to defeat him. It’s as if nothing short of nearly murdering him will suffice to get the job done. Bryan has always been associated more with defeating you with technical wrestling, and to The Fiend, that may amount to nothing more than a tickle.

I think The Fiend will win once again at the Royal Rumble, and I’m disappointed that WWE hasn’t teased a potential weakness that someone could exploit with him to make it at least appear he could be defeated. 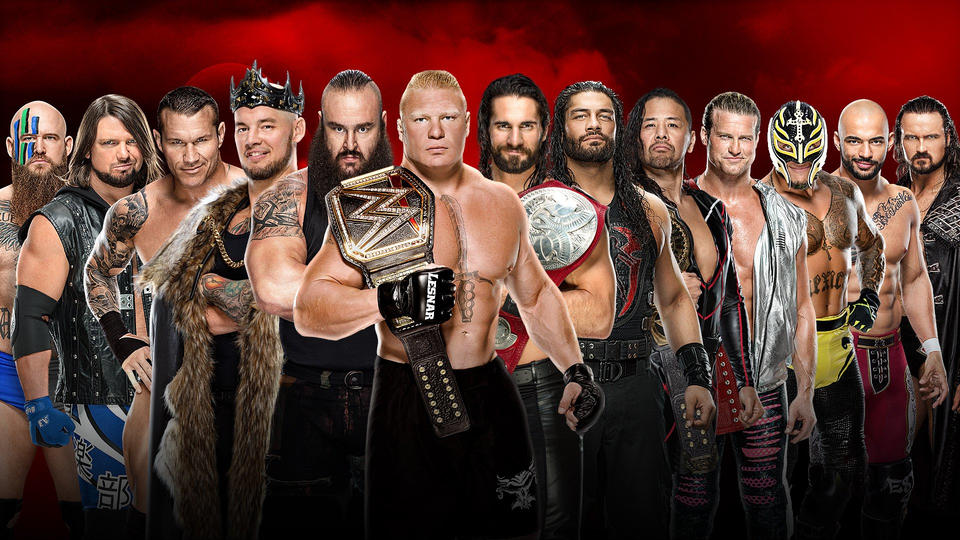 See what I was talking about  when compared to the women? This may prove to be one of the most loaded fields in Rumble history. In this match we have 6 former Rumble winners, a wide field of former world champions, current champions and the WWE Champion. This isn’t even including potential call-ups from NXT or returns from retirement. Let’s address them all.

The biggest name being thrown around is Edge. I don’t see Edge returning even though reports have said that he’s a “lock” for the rumble. He’s denied the reports himself as well. While it is not uncommon for wrestlers to lie about their current status to keep their return top-secret, I think Edge may be genuine here. Of course, him hitting that spear on Elias at Summerslam last year did me no favors in speculating to what degree WWE’s medical team has cleared Edge of. I’d love to see him again, but because of his health history, I just don’t think it’s worth the risk for a momentary pop (which would be huge).

The other name being thrown around is CM Punk. While he has technically not returned for WWE, he has returned for WWE’s affiliate, FOX. Punk has been playful with the fans in regards to his Rumble status. We have to see it to believe it, but I do not think we are currently in a place where we will be seeing CM Punk return to a WWE ring. At least not any time soon.

As for who I don’t think will win the Royal Rumble, I certainly don’t think it will be Brock Lesnar. Someone will eliminate him sooner or later. He just doesn’t seem like the guy to stay in the ring for nearly an hour and go towards the end. That is why I have also devised a theory that Lesnar and Heyman may decide to rib us and he’ll enter in at a later number instead of 1. Or maybe he just completely no-shows the Rumble, just because. That would be the most Brock Lesnar thing to do because it fits right into his character. Entitled.

Out of the current field of candidates, it’s hard to see which superstar has the clearest case for winning the Royal Rumble. Once you meander around all of the spot-holders, I think Roman Reigns has the case of winning, just because I can’t find enough reasons to think he WON’T be winning. I think Randy Orton and Drew McIntyre cancel themselves out, and AJ Styles doesn’t appear to be in a position of challenging a world champion at the moment. Seth Rollins certainly isn’t winning two years in a row, Strowman is currently pursuing Shinsuke’s IC Championship and Mysterio just lost his US Title Feud.

Cain Velasquez is someone that can potentially return, but I don’t think he’s a guy the crowd can get behind. Besides, Brock Lesnar embarrassed him in 3 minutes at Crown Jewel. So for now, I have Reigns winning the Royal Rumble. But it will be interesting to see what potential dark horses go the distance.