Hello! Welcome back to the Royal Rumble series. Today, I will talk about the 11th annual Royal Rumble. Did you miss any of the earlier volumes? Links provided below: 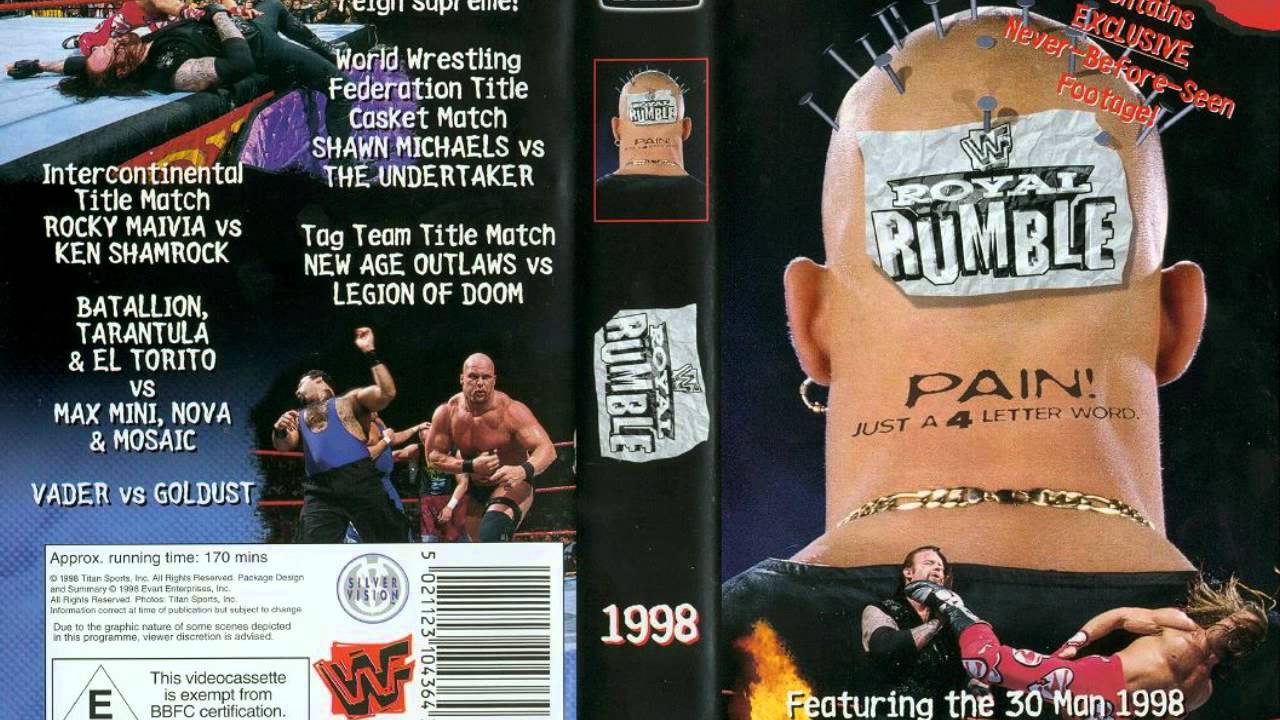 With an attendance of 18,542, Rumble ’98 had a smaller crowd compared to the previous years. The 11th Rumble did not use a tag line, but perhaps “Pain! Just a 4 letter word” was meant to be.. For the third time in history, the Rumble was not the main event. There were no dark matches before the show. Vader opened with a win over The Artist Formerly Known As Goldust.

Mini wrestlers fought in a six-man tag next, with the team of Max Mini, Mosaic and Nova defeating Battalion, El Torito (not the one who teamed with Los Matadores) and Tarantula. The Rock defended his Intercontinental championship in controversial fashion; using a knuckleduster and hiding it in Ken Shamrock’s trunks, only to lose the match after a belly to belly suplex. The Rock appealed to the referee, who after further inspection, found the knuckledusters and disqualified Shamrock. The Road Warriors look set to take the tag team titles from the New Age Outlaws, but could only win by DQ after the Outlaws broke up a pin with a chair.

The main event was a casket match for the WWF Championship between Shawn Michaels and The Undertaker. The latter looked set to win, but Triple H and Chyna helped HBK out of the casket, then the Undertaker’s brother Kane turned on him, chokeslamming him in to the casket. The show ended with Kane and Paul Bearer setting the casket on fire with The Undertaker inside. After the flames were doused and the casket opened, no body was found. The voice of The Undertaker could be heard saying “Kane, until our paths cross again, I shall never rest in peace!”

Not many places to find this match in its entirety, so I have to include it in parts. There is a video with all the match in one go, but the quality is horrible. Wish there were more places to find videos of the Rumbles. The build for the match starts at the 5-minute mark in the first video.

As Fink begins announcing, we see Mike Tyson chilling with Shane McMahon. We get a full explanation of the rules, before Cactus Jack shows up with weapons. His mentor and good friend Chainsaw Charlie AKA Terry Funk out next. Chainsaw takes his chainsaw in the ring and scares Foley out. He starts throwing many chairs in to the ring. Cactus hits the chainsaw with a chair, and then Charlies head. Charlie gets his own chair and goes to work on Cactus. We get a chair dual, which Foley gets the better of. Charlie asks for a chair shot to the head, and gets it. Cactus hands the chair to Charlie, and asks for one of his own. This is hard to watch, you won’t see blatant chair shots to the head anymore.

Next up is the Big Italian Tom Brandi. He lasts only seconds, as Cactus and Charlie dump him out. They go back to fighting each other, brawling. Cactus suplexes Charlie through two chairs. #4 is the Intercontinental Champion The Rock, and the crowd hates him. Trash can lid to Rockys head! Foley puts the trash can over The Rocks head, and Cactus/Charlie go to town on him. Rock falls to the outside, but is still in the match.

Mosh out next, and Charlie throws a chair at him even before he gets to the ring. Mosh works over Charlie, as Cactus and Rock fight in the corner. Chainsaw goes for a moonsault on Mosh, and misses, making Lawler laugh. Phineas I. Godwinn out. He ends up brawling with Cactus, before going on to others. 8-Ball of the D.O.A out next. Chainsaw eliminates Cactus! Did not see that coming. Lawler says someone’s “got to Stone Cold”, so he won’t be making it in to the Rumble; like anyone believes him. Blackjack Bradshaw is out and looking for a fight. He’s meaner than mean, according to Lawler.

The ring begins to fill up. Owen Hart comes out, but is jumped by the NWA representatives Jeff Jarrett and Jim Cornette; he must be the unluckiest Rumble contender of all time. Steve Blackman, the martial arts expert, makes his Rumble debut. JR puts Rock over, as 8-Ball piledrivers Mosh. D’Lo Brown (another Nation Of Domination member) makes his way to the ring. Rock and D’Lo work over Bradshaw .. til D’Lo strikes Rock! It seems it really is every man for himself. Oh no! It’s Kurrgan. The monster no sells everything. He dumps Mosh out. Blackman tries a karate kick, but misses the big guy. Marc Mero out, with the way more popular Sable. Mero hits Blackman with some boxing punches to the stomach. Kurrgan eliminates Blackman. The Rock stomps on his stablemate D’Lo in the corner.

Ken Shamrock! The crowd goes wild. Shamrock goes for Kurrgan, and knocks the monster off his feet. Shamrock goes to eliminate him, and 8-Ball, Bradshaw, Phineas I. Godwinn and The Rock assist in getting rid of the biggest guy in the ring. Kurrgan is very annoyed. Thrasher out, but Mosh has been gone for a while so he’s alone. D’Lo is choking The Rock! The Nation seems to be imploding. It’s Mankind! And it’s the first time anyone has entered the Royal Rumble match twice. He goes straight for Charlie, and eliminates him quick. The Artist Formerly Known As Goldust enters, and targets Mankind. After a few minutes, Goldust eliminates Mankind. NWA Champion Jeff Jarrett is ready for action. Remember Owen from earlier? Well, he gets his own back by eliminating Jarrett after a wild flurry of fists and a back heel kick to the face.

Oh boy .. it’s the Honky Tonk Man! Been a while since he was last in the Rumble match. Behind him comes an injured Triple H and Chyna. As they walk to the ring, Rock dumps his rival Ken Shamrock. Chyna tries using a crutch on Owen but he holds on to it, but Triple H uses another crutch and literally breaks it over Owens head, eliminating him in the process. The injured Helmsley hobbles to the back in triumph. Owen runs quickly to the back when he realizes what happened. And Ahmed Johnson is here. There’s still a lot of wrestlers in the ring. We see a replay of how The Rock was able to eliminate Shamrock so easy; Rock had given him a sneaky low blow. The third Nation member out next, the World’s Strongest Man Mark Henry. No one comes out for #22, because Skull was attacked earlier in the night. He and D’Lo team up to take out old Nation rival Ahmed Johnson. Henry also gets rid of Godwinn. The Artist formerly known as Papa Shango, the fourth Nation member Kama Mustafa is out next, and shoves the eliminated Ahmed Johnson.

Business is about to pick! It’s STONE COLD! The action stops, as everyone awaits Austin .. who comes through the crowd and surprises them all! Marc Mero gone. 8-Ball gone. Austin focuses on Thrasher as he low blows D’Lo. Mike Tyson is enjoying the match. Out comes Henry Godwinn. He goes right for Austin and pummels on The Rattlesnake. The Rock and Kama fighting, and Henrys on him too. Savio Vega comes out with his buddies and target Austin. He fights for his life, hitting everything that moves. The leader of the Nation enters, Faarooq, meaning all Nation members are in the ring together. Austin falls to the outside (but not gone), and Faarooq goes straight for The Rock. He falls to the outside and Rock/Austin brawl, giving us a glimpse of the future to come. Oh it’s Dude Love! The three faces of Foley is pulling a triple header.

Dude Love eliminates Bradshaw immediately. Rock hits The People’s Elbow on a Nation member, but Austin intercepts and pounds on his face. Chainz is out. D’Lo whips Thrasher, but he reverses and Faarooq accidentally back drops his Nation member over the top. The last participant enters, Vader. His only elimination is the Honky Tonk Man. JR calls Goldust “Bluedust”. Eliminations come thick and fast as we head to the end of the match. Austin eliminates Thrasher, then Kama, then Savio Vega. Crazy where Vader is in status at this point, as Bluedust eliminates him before flopping to the floor. Henry Godwinn charges at Dude Love, misses, and eliminates himself over the top. Chainz gets rid of Bluedust easily. Austin eliminates Chainz. The Nation still has three men in. Faarooq almost eliminates Henry .. Henry tries to get back in, but Faarooq knocks him off. We’re down to just Austin, Dude Love, Rock, and Faarooq.

Love goes after Faarooq, while Austin goes off after Rock. Love and Austin work together as they’re former tag champions, but it doesn’t last long. Austin low blows Love while he has the Mandible Claw on. Faarooq takes advantage and eliminates Love, making Foley the first man to be eliminated three times in the same match. While Faarooq worked on Austin, Rock surprised him and eliminated his Nation leader. The Rock and Austin fight hard in the middle of the ring, and the crowd pops. Rock almost eliminates Austin, but he gets back in, stunners, and eliminates him, becoming the third man to win back-to-back Rumbles. Tyson is on his feet applauding Austin’s performance. Austin celebrates, as the fans seem very happy with the result. And that’s the bottom line. 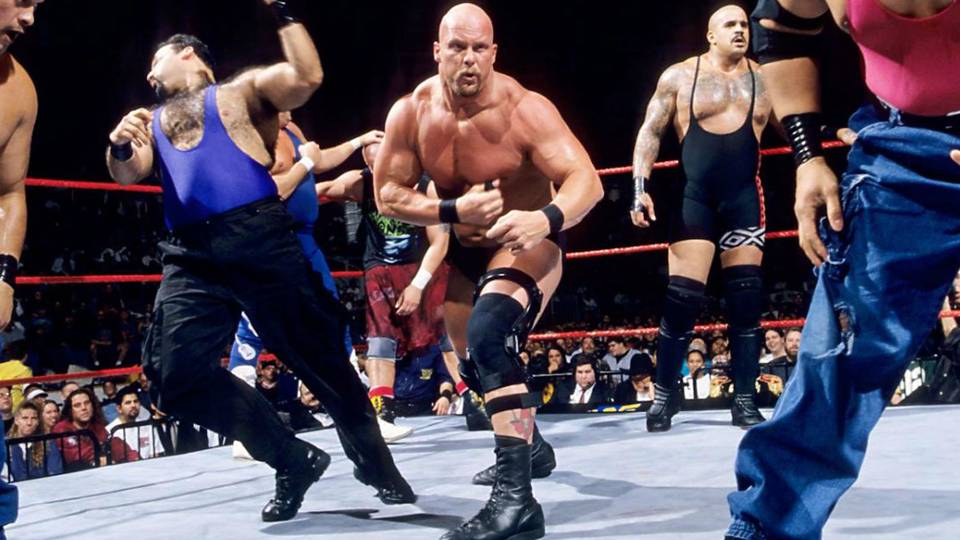 A real step up from the past few Rumbles. We got a nice, hardcore start to get us warmed up, and there were many fresh faces entering the match for the first time. The Rock looked like a star, despite being on his way to becoming one. I think many were expecting the Nation of Domination to well .. dominate, but it didn’t happen at all. There were a few filler guys, and Foley had to pull triple duty, but there were still enough big names. The action stopping after Austin’s music hit, only for him to sneak in around the back, was one of the best moments of the match.

The Rock vs. Austin escalates here. Their chemistry is clear, and the WWF used it to great effect. Austin was very clearly the favourite as the buildup centered around him, and Mike Tyson was there too. The winner was obvious, but the fans loved it anyways. They wanted Austin to win as they loved his attitude. Letting it come down to just The Rock and Austin was the best way they could end it, as it was believable that the Intercontinental Champion could find a way to eliminate Austin 3:16. It didn’t happen, but he put in a great performance and essentially rose above the Nation. Wrestlemania 14 was a great PPV, and the 11th Royal Rumble helped the build a lot. This is a highly recommended watch for anyone who wants to get into The Attitude Era.