Tommy Dreamer! E-C-F’n-W! And he’s bringing weapons, so this Rumble is getting hardcore. Dreamer and his trusty kendo stick take control of the match. Edge joins in with a kendo stick of his own, and both he and Dreamer punish DeMott with repeated hits. One of Edge’s shots hit so hard it told DeMott’s brain to launch his body over the top to the floor. See ya “stud”. This happens literally a minute after commentary salivated over his potential.

Dreamer celebrated too long, and gets nailed with err .. what to call it, a Con-Trash Can Lid-To?? From Jericho & Christian. Jericho hits Dreamer with a kendo stick, then becomes so angry with the stick he throws it full force in to the mat, launching it across the ring like The Rock selling a Stunner. Some serious kendo stick abuse right there!

Y2J & Christian eliminate Dreamer and again .. like HBK & Rey earlier, the crowd is not enjoying the quick eliminations of their favourites. Tajiri tries locking in the tarantula on Jericho, but Y2J escapes and simply pushes Tajiri off the ropes he’s hanging from. B-2! My word. Anyone remember B-2? John Cena’s best friend? He sucks. And lasted a grand total of 24 seconds before Edge eliminates him.

Whatever happened to him? Bull Buchanan had been under contract since 1997, but this was his last televised WWE match due to his Smackdown match with Redd Dogg being cut from the following episode. After being released, he wrestled in Japan and the American independent scene til his retirement in 2014.


Chavo manages to briefly escape elimination, til Edge spears him off the ring apron. Edge throws Jericho over, but he holds on and does a sweet job of emulating HBK’s move of teasing elimination before pulling himself back over the top. He notices Edge & Christian are very close to getting each other out, so he gives them a helping hand and eliminates both! He’s left in the ring on his own, given time to rest. He has this big .. ugly (carbuncle-like) blood spot on his eyebrow, possibly sustained from a kendo stick shot from Dreamer. Rob Van Dam is here. Dammit Rob .. at least try to make your strikes look like they’re connecting. RVD hits his usual moves and Rolling Thunder. Again, Jericho is close to being eliminated after a slingshot.

“Matt Strongly Dislikes Mustard”. I loved Mattitude, it was arguably his best gimmick. Shannon Moore appears on stage next to him for a brief second, but quickly disappears. Side Effect on RVD. He tells Jericho they should go after Rob. They keep up the double team, but not for long as RVD fights back. Y2J goes for the lionsault but misses. RVD sees he is down and takes to the sky with a 5-star Frog Splash.

As Matt & RVD fight, the always welcoming “Latino Heat” theme plays Eddie Guerrero in to the match. After some back-and-forth, RVD coaxes Eddie in to the corner and sends him flying across the ring with a monkey flip. RVD places Eddie on the top turnbuckle, but is cut off by Matt, who tells Eddie to stay up there. He scoop and slams RVD down, giving Eddie Guerrero time to Frog Splash him .. on his head? Yep, Eddie falls in the direction of RVD’s head. Matt surprises Eddie with a Twist of Fate! Surprisingly it’s Matt Hardy in control. 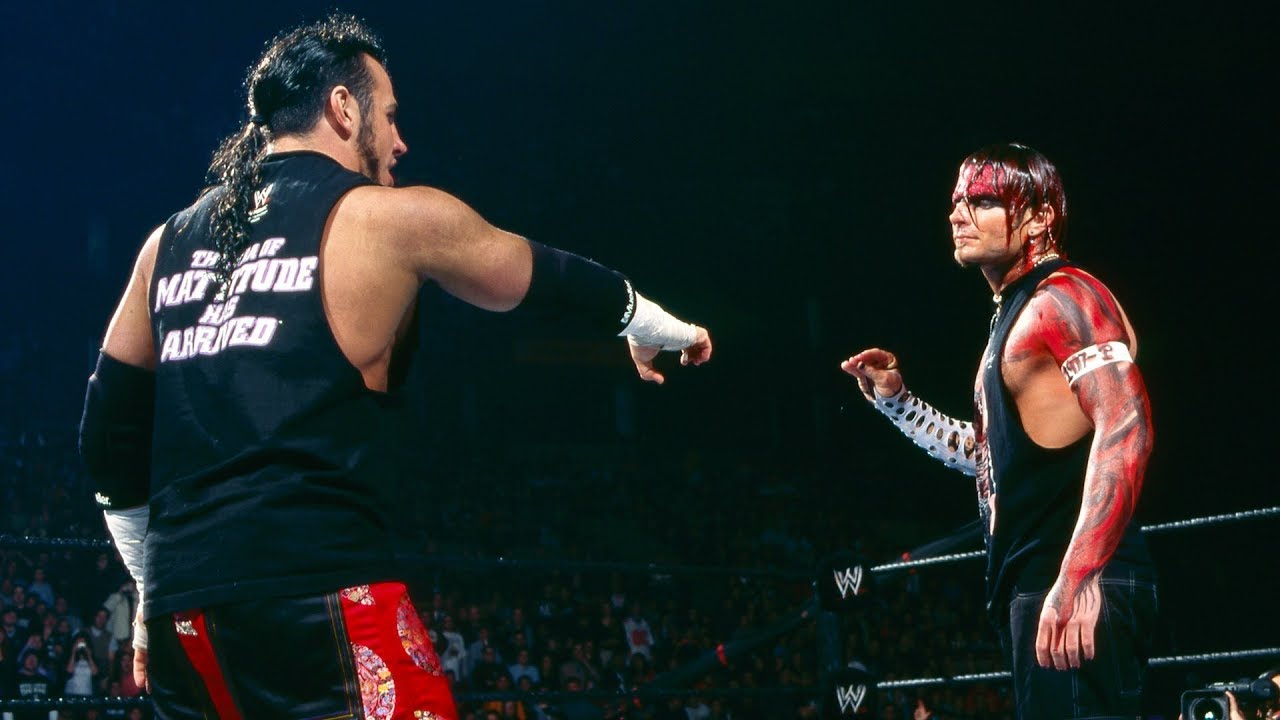 It’s Jeff! How come The Hardys always happen to find each other in Rumbles? Unlike last time (when they reunited), Jeff makes a hand gesture to imply Matt “talks too much” and deserves a beating. Jeff comes very close to eliminating his brother, but Shannon Moore pops up, using his legs to keep his mentor from falling to the floor. Jeff hits the Twist of Fate on Matt and climbs to the top. Shannon enters the ring and pleads with Jeff not to do it, proceeding to put his own body over Matt to protect him. Jeff does not care and gives them both the Swanton!

As the countdown clock returns, Eddie hits a perfect standing dropkick on Jeff. Roman Reigns’ big brother Rosey (RIP) of 3-Minute Warning out, with his manager Rico. He takes it to RVD, and Jericho after him. Test (RIP) out next with Stacy Keibler; I was always a fan. And just like Edge earlier in the match, Test lights up the ring. Taking down everyone, including Matt Hardy with a pump handle slam (never see that move anymore). General brawling til the next entrant .. which is John Cena “Thuganomics” style! Comes out with a full-on rap. Ends with “My style’s like a swollen penis, you can’t beat me”. Think of the kids John! .. Oh wait.

Cena gets jumped by RVD on the outside and forced in the ring. He takes so long to rap the countdown clock pops up again. It’s only Charlie Haas though. Interesting to see Cena going at it with Eddie in the corner (Eddie was a mentor to him). Jeff isn’t thinking, as he goes for Whisper in the Wind .. leaving RVD an easy chance to push Jeff off and eliminate him. Eddie does one of the classic lucha libre style hurricanranas on Jericho, where you hold their arm and go the turnbuckle way.

Rikishi out, and JR says he holds the record for most appearances in the Rumble (with 8).  He takes down Cena, Hass, Jericho, and Hardy before coming face-to-face with his fellow family member Rosey. There’s a stare down, before Shannon Moore gets involved for no clear reason. He splashes him in to Matt, who seems to be standing there waiting to be squished. Rosey calls to Rikishi to run them down with his backside.

As Matt & Shannon fall to the floor like they’re setting up the stink-face, Rikishi turns to look at them .. but Rosey completely turns him inside out with a clothesline! So much for a family alliance. Another family member in Jamal AKA Umaga enters the fray. And unlike Rosey, Jamal superkicks Rikishi right away. Rikishi fights back and gets Jamal in that familiar position .. so he can stink-face his own family! That’s one way of keeping strong family bonds. Jamal doesn’t sell it long though, and is back to punching Rikishi in the face. Rico finally manages to direct Rosey & Jamal to work together on Rikishi. Oh oh .. it’s Kane! Brace yourselves. Eliminations are coming.

Rico decides to get on the ring apron and gets choke slammed by Kane. Nice, I always hated that guy. Rosey manages to charge at Kane and knock him down, but he sits right back up. He charges at him again and Kane sends him flying over the top to the floor. He proceeds to double choke slam Matt Hardy & Shannon Moore! Jericho is knocked by Kane, getting so close to being eliminated, he literally swings (like a monkey) with one arm to propel himself back in. Benjamin in. Only brawling til the next entrant, which is Booker T “Sucka”. Makes a statement by giving Kane a Scissors Kick. Royal Rumble Spinaroonie! Eddie charges fast at Booker T .. but is thrown over the top so quick it’s easily missed.