Hello! And welcome back to the Royal Rumble series. I’ve managed to eliminate the first two Rumbles over the top rope so far, and here they are in case you missed them: 
With an attendance of 18,000, the third Royal Rumble coined the ever relevant tagline of “Every Man for Himself”. The card featured more matches than previous years, with four matches on the undercard, and the Rumble as the main event

The Bushwackers defeated The Fabulous Rougeaus, who they’d been feuding with all year. Beefcake and The Genius were both disqualified in a throwaway singles contest. Ronnie Garvin stuck it to Greg Valentine by making him tap in a submission match with the Hammer Jammer. Duggan and Boss Man had a match ending in disqualification due to Boss Man getting caught hitting Duggan with a nightstick.

Your commentators are Jesse Ventura and Tony Schiavone. It was Schiavone’s last WWF PPV event before jumping ship to WCW; where he remained til it’s closure in 2001. In the last piece I made a error when I said it was Andre’s last rumble. That was untrue, it was this one instead.

Kicked off with The Million Dollar Man, who started #30 the previous year. Showing his class, DiBiase eliminated Koko B. Ware before the next entrant. Ted took advantage of Marty Jannety’s cross body, by ducking out of the way so Marty could eliminate himself. He waited for his next opponent .. Jake Roberts! The first man to enter the Rumble match on three consecutive occasions. Rarely happened before, but DiBiase cut Roberts off from getting in the ring by going to the outside without eliminating himself. They got back in and fought til the Macho King ran to the ring! DiBiase and Macho King teamed up on Roberts.

Piper debut! Crowd went bananas as he evened the odds. Roberts and Piper fought back-to-back fending off the heels. The Warlord up next, just to make it tougher on Piper and Roberts. And shockingly he lasted way longer than his first attempt. Bret Hart! Making it more of a six-man tag. Piper and Bret had fun teaming up. Oh no .. it’s Bad News Brown. And once again, Roberts was denied a long outing when his attempt to DDT DiBiase gave Macho King the opportunity to clothesline him over the top rope; Jake is so unlucky in these things. Dusty Rhodes debut! Quite a few legends in the ring. Dusty straight for Macho King! And in short order, Dusty eliminated Savage! Setting up their mixed tag match for Wrestlemania. Oh oh .. here comes Andre!

See ya Warlord. Piper and Dusty teaming on Andre! But that didn’t last long. Red Rooster again. Brown tried eliminating Piper, which backfired and he got eliminated instead. Unhappy with the outcome, Brown got up on the ring apron and yanked Piper backwards over the top rope to the floor. This was a setup for their Wrestlemania match. Andre dumped Rooster just in time to take a beating from Demolition’s Ax. Andre tied up again like 1989. By the way .. Ted DiBiase is still in there! Haku came out next, which was lucky as he could help out his Colossal Connection tag team partner. Smash in, giving the match an interesting tag team feud taking up most of the spotlight.

Not long after Akeem entered, it seems we lost Bret Hart thanks to Dusty. Demolition eliminated Andre! Making them the only living creatures other than a snake to eliminate The Giant. Jimmy Snuka made his Rumble debut, to a chorus of woots from the capacity crowd. Didn’t take him long to eliminate Akeem. Dino Bravo out, and making no impact at all. The Canadian Earthquake looked set to make a major impact, and did, by eliminating Dusty Rhodes and Ax, before being forced out by everyone in the ring (Snuka, Smash, Haku, DiBiase & Neidhart). Huge pop for The Ultimate Warrior! Bravo out shortly after. Haku got Smash over. Martel enters, and Santana right after, so the former tag partners naturally found each other quickly. Honky Tonk Man with the usual reception. And next up is the WWF Champion Hulk Hogan!

Eliminations everywhere. Shawn Michaels entered, but had the shortest run of anyone with just 12 seconds thanks to Warrior. He also eliminated DiBiase, who’d been in almost 45 minutes. After everyone was gone, it came down to Ultimate Warrior and Hogan. Huge moment, and there’s a buzz in the air. They square off, but they’re so evenly matched it’s stalemate. With both down, it gave The Barbarian free rein to attack both. Someone jumped the gun, as Rick Rude showed up at least nine seconds before he was meant to, and focused his efforts on Warrior.

Something similar to the previous year, but this time it was Warrior almost being eliminated by Rude and Barbarian. Hogan saw it happening, but instead of helping Warrior (like he’d done before), he clotheslined the backs of them, which was always going to eliminate Warrior. The commentators argued if he’d done it on purpose. Warrior was angry, but didn’t realize it was Hogan who caused the elimination. He attacked Rude and Barbarian, before getting out of the ring and running intensely backstage .. which I found humourous. And the match died from there .. it was painfully obvious who was winning this. Hercules out at #29, and Mr. Perfect #30.

With Rude and Perfect left against Hogan, The Immortal one managed to overcome the fresher guys. Rude went first, Perfect went later, and Hogan celebrated as the winner of the third Royal Rumble. Just a few records set include:

Not sure what it is about the first few Rumbles, but they’ve all been great. You could say it was a little disappointing Hogan won, but at the same time .. it’s not like he went over at Wrestlemania. Speaking of which, I’ll leave a link for that. Warrior went from being a hot prospect, to a worldwide superstar in a year. Andre looked tired, but he still managed to carry himself as The Giant. The showdown between Warrior and Hogan was the icing on the cake, and hyped Wrestlemania really well.

If you’re a fan of talented wrestlers like Rude, Perfect, and Shawn Michaels .. you may be disappointed. As the WWF headed in to a new decade, it still looked, breathed, and showcased like the 1980’s. Just how long will it take til I feel like I’m not watching an 80’s show? Tune in next time to find out! And as always, thanks for reading brother! >>> Wrestlemania VI 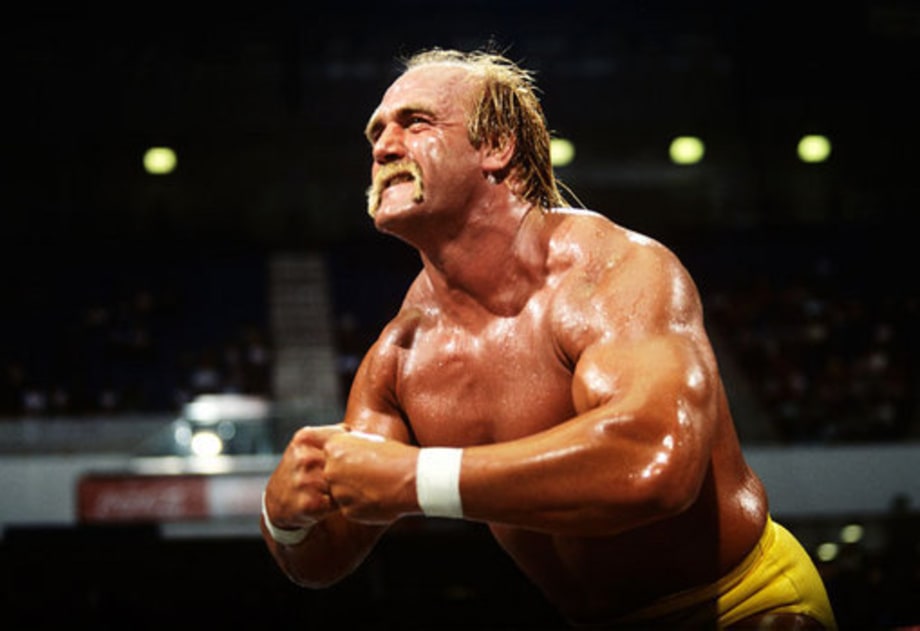