Hello! And welcome back to the Royal Rumble series. Moving on to the fifth Royal Rumble, and if you missed the others here’s the links: 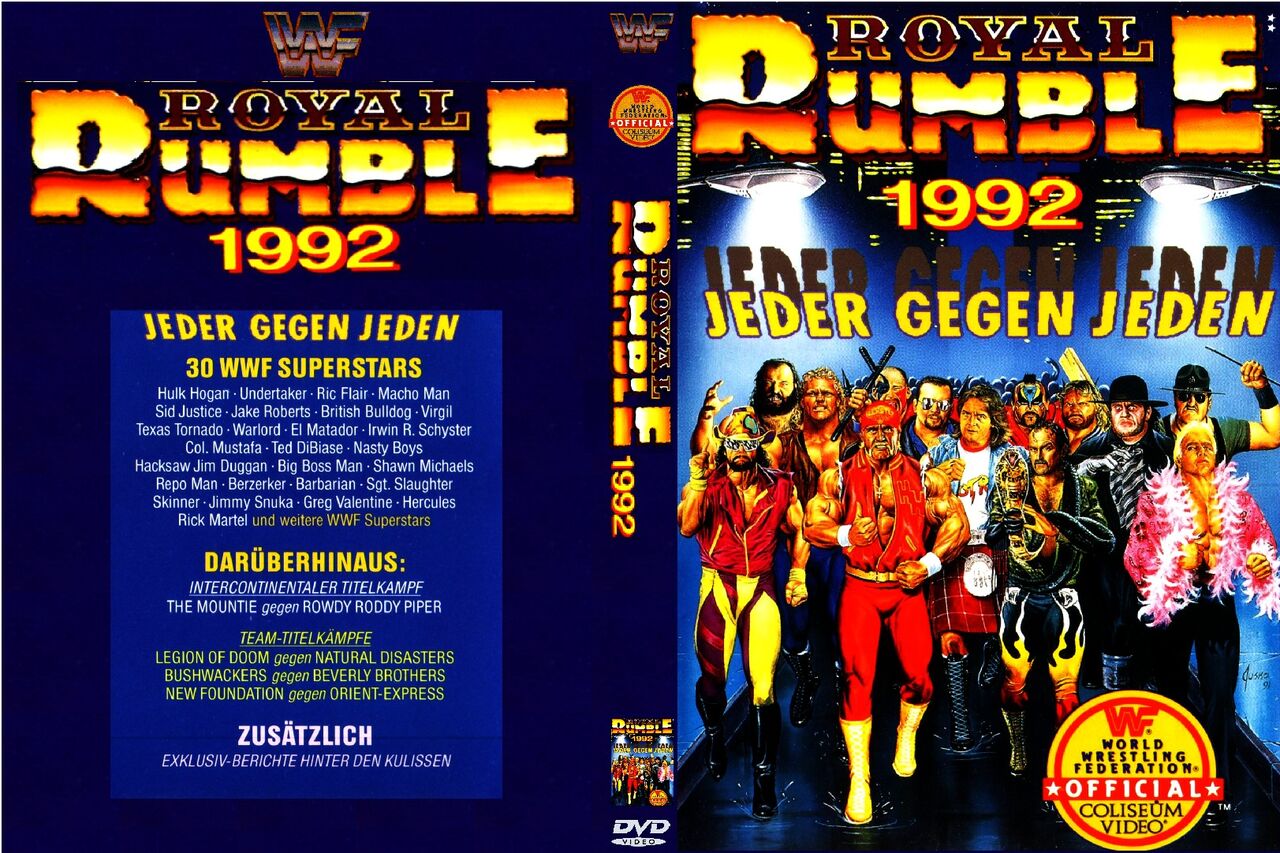 
With an attendance of 17,000, the fifth Royal Rumble coined the tagline (same as 1990) of “Every Man for Himself!”. The card featured four matches on the undercard, with the Rumble as the main event. The New Foundation (Owen/Neidhart) defeated The Orient Express to open the show. Piper overcame The Mountie to claim his only singles titles in the WWF, the Intercontinental Championship. The Beverly Brothers beat The Bushwackers. The Natural Disasters took on The Road Warriors for the Tag Team titles, and were successful in winning, but did not claim the championships due to winning by countout.

For the first time in history the Royal Rumble promised a reward to the winner; the vacant undisputed WWF World Heavyweight Championship. Hogan was stripped of the title by President Jack Tunney for controversial moments in his earlier matches with The Undertaker. Your commentators are Gorilla Monsoon and Bobby “The Brain” Heenan.

British Bulldog in first, at the peak of his popularity (same year he beat Bret Hart at Summerslam for the IC title in front of 80k+ British fans). Unluckily for a second year in a row, Ted DiBiase comes out early at number 2. After an intense back and forth, Bulldog eliminated DiBiase before Ric Flair made his way to the ring for his Rumble debut. The other Nasty Boy (the one not in the previous years) entered, only to be dumped by Bulldog a minute later. Haku in next, and eliminated two minutes later by Davey Boy.

Shawn Michaels in, one month departed from his split with Rockers tag team partner following their memorable Barber Shop segment. Santana! Fifth Rumble in a row for him. A very different looking Barbarian entered, and looked a threat. Kerry Von Erich AKA Texas Tornado in for his second appearance in as many years. Oh my god .. it’s The Repo Man. Ring filling up nicely. The Hammer in next, and straight for Flair. Volkoff in, but didn’t last long as he was thrown out by Repo Man. Bossman bombs it down to the ring, to a decent reception. Repo Man blindsided Valentine and threw him out. Boss Man noticed Repo Man and blindsided him.

Oh there goes Bulldog! Thanks to Flair. (Boo). Then he gets Tornado over the top rope as well! Michaels and Santana eliminated each other! Hercules entered and targeted Flair. Barbarian came close to eliminating Flair, but was thrown out himself by Hercules. Boss Man threw himself at Herc, getting rid of him, and almost himself too. Boss Man and Flair left in the ring with a staredown; so Flair poked him in the eyes. Boss Man clumsily threw himself at a ducking Flair, sending the big man over the top rope. Flair left in the ring for a few seconds ..

It’s Piper! And Flair’s face tells the story. He tried to run, to no avail. Piper worked Flair over as the clock counted down. Roberts! His fifth Rumble in a row. And he got in, sat down, and watched Piper at work. He soon got bored and went after Piper. HOOO! It can only be Jim Duggan. IRS slowly makes his way next. Jimmy Snuka as well, the ring filling up again. Crazy how much punishment Flair has taken so far. It’s The Undertaker with Paul Bearer! And The Deadman eliminated Snuka right away.

Taker choking out Flair and the crowd goes nuts. Heenan can’t bear to watch. Oh it’s Macho Man time! And Taker clubs him in the back of the head. Savage eventually finds Roberts and their feud continues. Savage eliminates Roberts, then literally throws himself over the top and to the floor. Wait a minute?

Andre The Giant eliminated himself by going over the top rope and to the floor in an earlier Rumble. However, when Savage went over the top rope on this occasion .. it was an accident. Many believed Savage had eliminated himself, but The Undertaker kept coming after him, to get him back in the ring, but Savage refused and kept going after Jake. The commentators had to cover for the mistake and say he was not thrown out by another wrestler, so he’s still legally in the match. Taker ensured Savage got back in the ring.

Bunch of mid-carders in next, with The Berzerker, Virgil, and Colonel Mustafa. Rick Martel! A good number for him, and the commentators acknowledged his longevity record. Of course, Martel doesn’t want anyone beating it, so he goes after Flair. It’s The HULKSTER! And first thing he does? Bangs The Undertaker and Flair’s heads together. Hogan, Flair, and Taker trade blows in the corner. And not long after, Hogan eliminates The Undertaker! And there goes Berzerker as well. Duggan eliminates himself and Virgil. And yeah, Skinner out next? Great.

Sgt. Slaughter out for his first Rumble I believe. Martel gets rid of Skinner. Sid Justice! The crowd pops, and Heenan can’t stand it. The Warlord is the last in, and eliminated two minutes later by Hogan & Justice. Hogan and Flair start fighting on the outside. Justice launches Sgt. Slaughter from one side of the ring to the other, and over the rope in the corner. Piper used the tie of IRS to eliminate him. Justice eliminates Martel and Piper at the same time. Flair took advantage of the situation by knocking Justice in to Savage, eliminating the Macho Man. It’s just down to Justice, Hogan, and Flair (who’s been in almost an hour).

While Hogan was working on Flair, Justice sneakily pushed him over the top. Hogan didn’t like the betrayal, and got near the ring apron to confront him. Hogan grabbed him arm and held on, giving Flair the chance to lift him over the top rope. Flair became the Undisputed WWF Champion, with Bobby Heenan repeatedly saying “Yes”. Flair got out of there with the title, while Hogan and Justice had to be separated in the ring. Flair went backstage and cut an epic promo which will go down in history as one of the best.

A really enjoyable Rumble despite the obvious winner. It was the manner in which he went about it though, Flair didn’t roll up in to a ball and hide in a corner. He was often in the thick of it, and it made the match better seeing him always on the brink. The highlight of the match was seeing Hogan, Flair, and The Undertaker in close proximity. It showed how big the WWF was getting, and the magical combinations the Rumble can give us. Justice jumped over from WCW in late ’91, and was initially an ally of Hogan. This match sparked the beginning of his heel turn, and it went a long way in helping him become a main event player.

Flair recently said this match helped him get his career back on track. A fallout with the “idiots” in WCW management led to Flair turning up in the WWF with the NWA title. He wanted to prove he could do it in the WWF, so to win the title on such a big occasion reinvigorated The Nature Boy. He said the promo he cut afterwards was from the heart, and a dig at his former employer. Flair went on to face Randy Savage at Wrestlemania, which became personal very fast.

I’ll end this by saying Rumble ’92 was one of the best so far, and with the WWF title on the line .. it had no other choice. The match achieved legendary status, as it proved that even if you start as early as #3, there’s always a chance. Flair made what seemed impossible .. possible, and this is why Rumble ’92 continues to be one of the best of all time. It brought a newfound prestige to the match, and to this day we are celebrating what it gives us every year.

Thanks for reading! As always, I appreciate it. I’ve updated the Wrestlemania of the same year, which you can read at the link, if you’d like to see the aftermath of Rumble 92. See ya folks. WOOO! >>> Wrestlemania VIII