Hello! And welcome back to the Royal Rumble series. Moving on to the eighth Royal Rumble, and if you missed any of the others, here’s the ever-growing list of links:


With an attendance of 10,000 (the lowest so far), the eighth Royal Rumble had a tagline of “30 Men, 1 Winner, Something’s Gotta Give!”. It featured four matches on the undercard, with the Rumble as the main event. Jeff Jarrett became Intercontinental Champion for the first time by taking advantage of an injured Razor Ramon. Undertaker overcome the challenge of IRS, in a match some critics considered a dud. Due to the title match breaking down, the referee declared Diesel and Bret Hart’s match a draw. A tournament for the vacant tag team titles was drawn up in December, and culminated with the 1-2-3 Kid and Bob Holly winning them in the final over the bigger team of Bam Bam Bigelow & Tatanka.

The previous years Rumble saw the entrants come out every 90 seconds, instead of the usual 120. It went one further this year, as they lowered the entry time to a mere 60 seconds. The decision to do this is odd, but it could’ve had something to do with wanting to give other matches more time (the title match went on for almost half an hour). Because of this, it is the shortest Rumble of all time. As a bonus reward, the winner would be accompanied by Baywatch star Pamela Anderson at Wrestlemania. And for the first time at a Royal Rumble PPV, Jerry Lawler called the action from commentary, alongside Vince McMahon. Warning: After the video there will be spoilers, if you’ve never seen it before.

We start with “Sexy Boy” Shawn Michaels’ entrance, as he showed off to Pamela Anderson. British Bulldog entered, and as always .. I began feeling patriotic for Davey Boy. They don’t waste any time going to work on each other. Eli Blu (who?) out next, and I initially thought it was The Berzerker. The Dumpster AKA Duke Droese out .. and I can’t bring myself to explain how I feel about his gimmick. Jimmy Del Ray enters (another tag team guy), and Jerry Lawler says he likes him. Vince asks if he thinks Del Ray will win the Rumble, and Lawler replies “not that much”. Sione up, and if I didn’t look close .. I wouldn’t have guessed he used to be The Barbarian. And finally, we get out first elimination with Del Ray being ousted by the Bulldog.

Nothing noteworthy for a while, we get new entrants Tom Prichard, Doink The Clown and Kwang. Barbarian comes close to throwing HBK out, but he won’t be the only one. Vince notes this is the “fastest paced Rumble in history”. Rick Martel out .. breaking the record for the amount of Rumbles entered (7, beating Santana). Owen Hart comes out with a big smug grin, only to be ambushed by his brother. Honestly .. this was the best part of the match; Bret was pissed! Oh my god .. it’s Timothy Well! Can you feel the sarcasm? And while that’s going on, Owen got eliminated by Bulldog off-screen. The presence of Bret seemed to light a fire under Bulldog and Michaels, as they go on a flurry.

Michaels got Dumpster, Bulldog got Timothy. Sione said goodbye to Rick Martel. Prichard out by Michaels, and Doink out by Kwang. While the camera panned to Bushwacker Luke entering, Sione got Kwang and Eli Blu out. Blu didn’t like it, so he got Sione eliminated. Michaels got rid of Luke very quick, and it’s back down to the original two. Jacob Blu .. yeah, Michaels gets rid of him in 17 seconds. Ooo! It’s King Kong Bundy making his Rumble debut. Bit tougher for ’em to eliminate the big guy. Mo out .. in for 3 seconds, and out again by Bundy; Lawler laughed hysterically. Mabel out to a decent reception. Mabel and Bundy squared up, and Mabel soon had Bundy clinging on. Bushwacker Butch came out, and Bundy did the worst job of holding on .. allowing his feet to flump on to the floor below.

Two big strong guys in Mabel and Bulldog found it tough getting rid of Michaels. Lex Luger! And he dumps Mabel like he owed him money. Mantaur .. yes, Mantaur is out next. Ridiculous. Vince tries to sell him as a “beast” and a “monster”, but he does the same for Henry Godwinn so it means nothing. Aldo Montoya out, which is just Justin Credible in a mask. Godwinn is next, and yes he’s also a “monster”. Cowboy Billy Gunn appears, and is still nothing special. Bart Gunn out too, and it’s been a while since we had back-to-back tag partners in the Rumble. Backlund out .. with some serious heel heat! Love it. Bret didn’t have enough of beating up his brother, so he ambushed Backlund as well. Dammit Bret! Stop being more entertaining than the match itself. Backlund does eventually get in the ring after Bret’s had enough. Oh yeah .. Steven Dunn’s in there, forgot to mention. Luger gets rid of Backlund, just because he’s too hated to get near his longevity record.

Dick Murdoch is next, and I really enjoyed his work. He was a bright star, making things happen where others wouldn’t. Adam Bomb gets another good number, and a better welcome than the previous year. Fatu showed up at #29. Mantaur gets eliminated by Luger. Crush is #30. Crush & Murdoch team up to take out Billy & Bart Gunn. Ready for a ton of eliminations? Dunn’s done. Camera pans to Pamela, who smiles and points to the ring .. implying the cameras should get back to the action. Murdoch uses his head on Fatu, and fails. Crush deals with Adam Bomb. Michaels gets rid of “Kliq” member Aldo Montoya. Murdoch tries to get rid of Michaels .. but Luger breaks it up. Lawler claims it to be the stupidest decision ever, while Vince spends a great deal of time rationalizing his logic; it can’t be done Vince! Crush lets Fatu go for an early shower.

Murdoch took Godwinn for an aeroplane spin, which at first .. seemed like a good idea, but when he tried to let him go .. Godwinn was having none of it and pulled him over the top instead. Godwinn had solid strength keeping himself up off the floor. Didn’t last long though, as Luger got rid of the big guy a couple of minutes later. Down to Michaels, Bulldog, Luger and Crush. While Luger worked on Crush, Michaels snuck up from behind and knocked him over. Michaels gestured to Crush to team up on Bulldog. It worked .. briefly, as Crush came close to eliminating HBK. Bulldog went for Shawn, who ducked, sending Bulldog in to Crush, knocking him over the top rope. So as it started, it finishes with Bulldog and Michaels. Bulldog clotheslined Michaels over the top and he hung on. Bulldog’s music started playing, and he celebrated on the 2nd rope, not knowing Michaels was still in. HBK struck him from behind and Davey Boy fell to the outside. It was announced Michaels was the victor, as only one of his feet touched the floor. He celebrated in the ring with Pamela Anderson.

Had Diesel, Bret, Razor Ramon and The Undertaker taken part, it could’ve been an exciting forty minutes. It suffered with eliminations having little to no meaning. The lack of time made it tougher on the guys trying to get over. There were many new faces, but they didn’t do a lot before being thrown out unceremoniously. Two of the biggest reactions went to Owen Hart and Backlund’s entrances, but neither managed a decent showing after Bret’s attacks. Michaels was incredibly dominant .. not only did he eliminate as many guys as Luger and Bulldog combined, he had the strength of ten men whenever he got close to elimination.

The finish is iconic for good reason. Not just for being historic (as HBK was #1 entrant), but because it showed his unparalleled determination. It helped solidify Michaels as a main event star, and he went to Wrestlemania looking for his big moment. Luckily I didn’t fall asleep this time, but with the speed of the entrants it was easier to keep the eyes open. They should use forty guys if they ever plan on having guys enter every sixty seconds again; the ring would get pretty busy though! I still prefer having entrants every two minutes though, it gives more room for classic moments and entertaining spots.

As much as I’m a fan of Bulldog and Michaels, two men can’t carry a Rumble. I was looking forward to watching this, but I was a little deflated in the end. #8 failed to accomplish the enormity and excitement of the Rumble match. I’m glad Vince reverted it back to the classic 2-minute entry time by 1996. So in the end, all I can say it was an average Rumble .. with a historic finish. It’s a mini-Rumble with so much Shawn Michaels you’ll be over-selling all the way to the bank. If you’re a big fan of “Sexy Boy” or “Davey Boy” or Pamela Anderson’s face, it’s definitely worth a watch. Otherwise, I wouldn’t blame anyone for passing on it. See you for Rumble #9, and here’s a link for the edited Wrestlemania piece from my series of reviews. Thanks for reading! >>> Wrestlemania XI 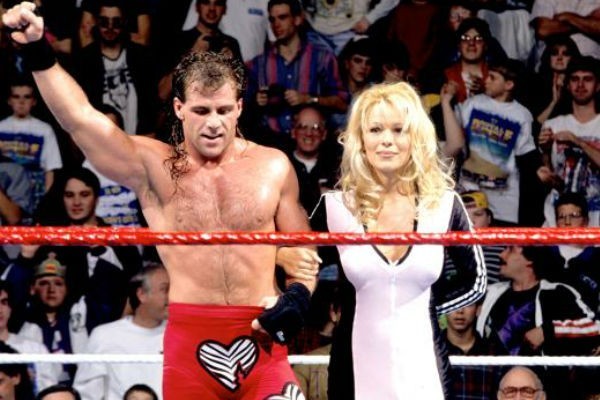