Hello! Welcome back to the Royal Rumble series. Today I will talk about the ninth Royal Rumble. Did you miss any earlier volumes? Links provided below: 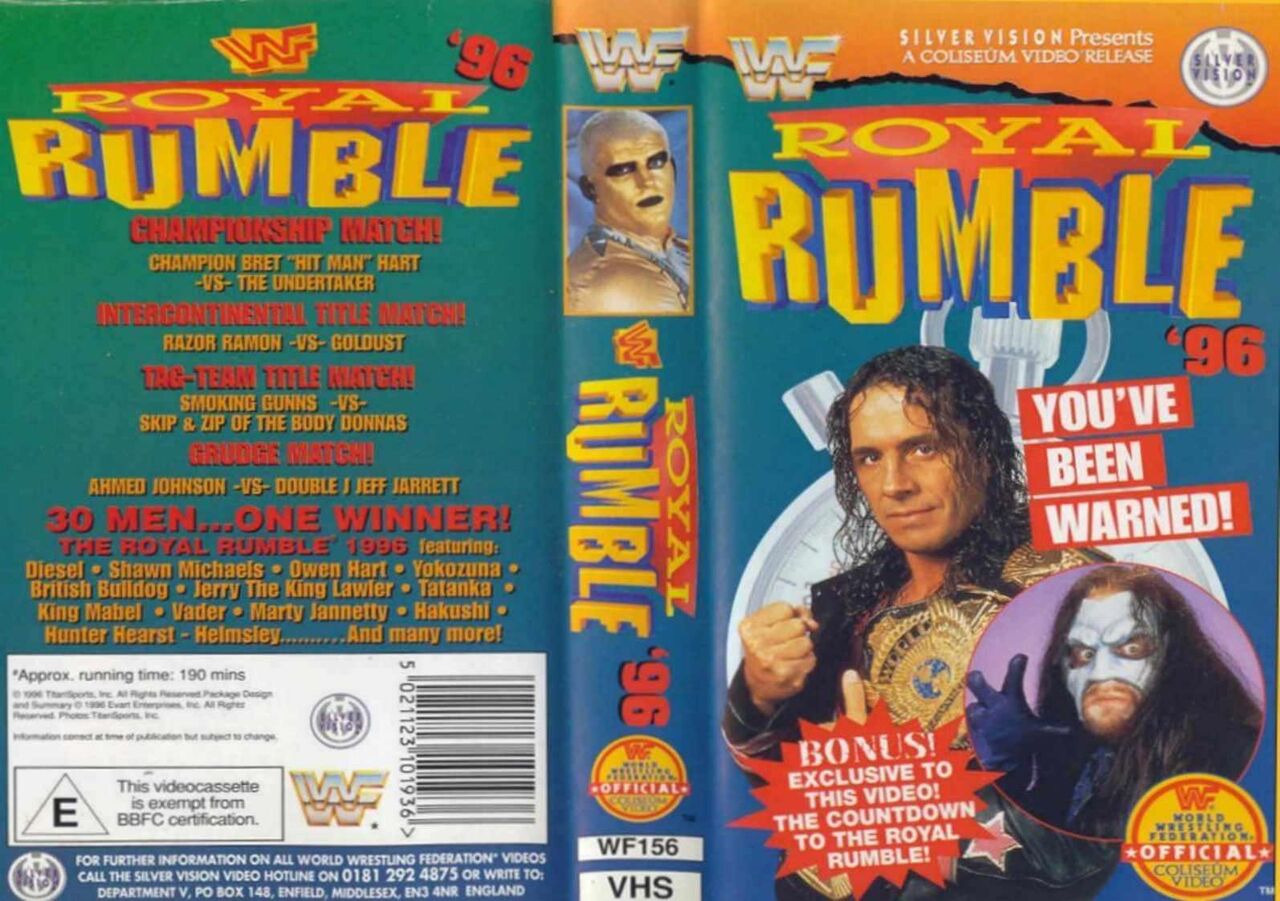 
With an attendance of 9,600 (lower than ’95), the ninth Royal Rumble used the tagline “You’ve been WARNED!“. For the first time in history, the Rumble was not the main event. Ahmed Johnson won the opening match over Jeff Jarrett by DQ. The Smoking Gunns retained their tag titles against The Bodydonnas. Goldust claimed his first WWE championship by beating Razor Ramon for the Intercontinental title. In the main event, The Undertaker was unsuccessful in claiming the WWF Championship from Bret Hart, as he could only win by DQ.

After watching the shortest Rumble (’95) ever, I was happy to see entrants come out every two minutes again (like it was originally), instead of every minute. It featured many Rumble debuts, as well as the last for some of the WWF’s biggest stars. For the first time, every entrant entered with their entrance themes. A wrestler qualified to be in the Rumble by winning a match outside the WWF for the first time; Doug Gilbert won a battle royal in Jerry Lawler’s USWA promotion. Also the company introduced “Free For All”, which evolved in to the pre/kickoff shows we see today; The Dumpster won a match by DQ on Free For All against Hunter Hearst Helmsley to claim the #30 spot.

Rumble ’96 is interesting because it shows the state of the WWF before the new era ushered in a cool, edgy attitude which helped them survive against WCW’s rising popularity. Vince McMahon and Mr. Perfect provided commentary for the match.

Warning: After the video there will be spoilers, if you’ve never seen it before. Forward to the 58-minute mark as its the full show at the link: http://www1.projectfreetv.live/watch-8889-royal-rumble-1996-online-free.html

Hunter Hearst Helmsely was the first entrant, as we looked back at his Free For All match against The Dumpster. Henry Godwinn came to join him, accompanied by a slop bucket. Record holder Bob Backlund out next. Lots of good brawling in the early stages. Anyone ever notice how Curt Hennig and Jonathan Coachman sound alike? Confused me at first. And there’s a reason The King isn’t on commentary, as he’s out next. Just to play mind games, he decided to bring the slop bucket in to the ring.

Godwinn managed to get hold of the slop and scared everyone out; must be lethal slop. He dumped it all over Jerry Lawler on the outside, but if anything it just fired him up. Bob Holly out next, and still no eliminations. King Of The Ring winner King Mabel made his way to the ring, and straight for the other big guy Godwinn. Jake “The Snake” is back in the Rumble! Oh how I’ve missed the crowd pops. So he just goes and brings a bag in and dumps a huge freaking snake in the middle of the ring! Jerry Lawler gets to meet the snake up close! Luckily he had an attendant to coax the snake back in to the bag, or we could’ve seen it hijack the rest of the show.

Goes to show WWF’s lacking roster, as we get an old Dory Funk enter the match! Much to my surprise, he’s staying in for a long while. “DDT” chants were heard. Lawler creeps out of the ring and hides under it .. back to him later. Oh oh! It’s Yokozuna. And finally we get our first elimination after 14 minutes, with Yokozuna getting rid of Backlund. Mabel & Yokozuna cross paths for a while. 1-2-3 Kid out .. looking paranoid. And he should be, because for the only time in Royal Rumble history, Razor Ramon made his presence known. He wasn’t part of the match, he just wanted to get revenge on 1-2-3 Kid for costing him the Intercontinental title earlier.

In possibly his only major American TV apperance, AJPW’s Takao Omori came out next. If you watch close enough, you can see Hunter doing the Ric Flair flop. Savio Vega AKA Kwang out next. The smart Yokozuna picked just the right moment to catch Mabel unaware, to push him over the top to the floor. While it looked like Jake Robets would be eliminated, it ended up being Omori instead. VADER TIME! Making his WWF debut. Dory did so well, but a scuffle with Vega saw him fall over the top to the floor. Not sure if Vader understood the rules, as he did a snapmare to Vega to get him back in the ring. Savio overselling Vaders offense. Doug Gilbert of the USWA in next! And Hunter welcomes him to the WWF.

Jake was going for a DDT on Gilbert. Vader gave him the weakest clothesline ever, knocking Roberts halfway across the ring .. and he jumped over the top rope! I’d be that scared as well Jake. Vader’s just no-selling everything, while every blow from him is like being hit by a satelite crashing from orbit. One half of The Squat Team (more known as The Headhunters) made his WWF debut, only to be eliminated shortly after by Vader. Oh! He got rid of Gilbert as well. Yokozuna and Vader stayed away from each other .. until now.

The other Squat Team member out .. and the one who was just eliminated joined him. They both came to the ring, as the eliminated one wanted to help the other. Vader & Yokozuna made sure both were gone for good. Owen Hart is out next, and he’s not had much luck in recent Rumbles. Unluckily for Vega, Vader and Yokozuna felt like teaming up on him. AND HERE HE COMES! The unstoppable hunk .. HBK Shawn Michaels! And of course he goes after his good buddies Hunter and 1-2-3 Kid first. Michaels starts owning the ring like he’s Hulk Hogan, despite Vader and Yoko being in there. Even more so after he was able to eliminate Vader and Yokozuna at the same time! He also got rid of his friend 1-2-3 Kid, before Hakushi made his way down for his only Rumble appearance.

Here’s a first .. what do you when a monster who’s already been eliminated, starts eliminating everyone from the ring? Well that’s what happened here, as an unmasked Vader came back and eliminated everyone .. including Michaels! Referees came down to stop the rampage. Gorilla Monsoon got in Vader’s face and told him to go to the back. By order of Monsoon, everyone Vader eliminated was allowed to get back in (has never happened before). Tatanka out next. Aldo Montoya AKA Masked Justin Incredible out next. Hakushi didn’t last long, thanks to Owen. Michaels took a break on the outside. He eventually remembered that King was still under the ring, and dragged him out by his legs. Montoya was eliminated by Tatanka, and at the same time Michaels got rid of Lawler for good.

Oh oh! It’s Diesel .. in his last Rumble before moving on to WCW. Tatanka’s over the top right away. Despite being friends, Diesel wastes no time punching Michaels in the face. Kama AKA Papa Shango AKA Godfather AKA Goodfather out next. And later, making his WWF PPV debut .. The Ringmaster Steve Austin made his way to the ring. He soon found a way to get rid of Bob Holly, who had been in for almost forty minutes. Super jobber Barry Horowitz out next. After being in for almost fifty minutes, Diesel eliminated his fellow Kliq member Hunter Hearst Helmsley. A lean Fatu wearing red out next. Isaac Yankem DDS aka Kane out next. Horowitz eliminated by Owen. And while we were watching a replay, Diesel & HBK teamed up to get rid of Owen. Marty Jannetty out, and straight for Diesel.

Bulldog! And boy do I never tire of the entrance music. Jannetty had the wrong idea, as he went after Bulldog and got eliminated. Funny how the planets align, as Fatu and Austin brawled intensely in the middle of the ring, several years before Rikishi “did it for The Rock”. At the 57-minute mark, you can see Fatu clothesline Austin, making him fall to the outside. It has been documented as accidental, as Austin was meant to hold on and make it to the final four, giving him some spotlight before a big push. You can see how frustrated Austin is with himself as he smacks the ring apron. Fatu goes out shortly after thanks to Yankem. Duke “The Dumpster” Droese is the last man out. Bulldog and Michaels fought on the outside, prompting Owen Hart to return to help his tag partner. Bulldog got Michaels in the ring and lifted him high, only for Diesel to make the save.

Michaels delivered the perfect dropkick to knock the bigger Isaac Yankem over the top. Kama & Diesel teamed up to dump The Dumpster. Down to the final four with Kama, Diesel, Bulldog and Michaels. HBK uniquely evaded Bulldog and eliminated him with a clothesline. Kama came close to eliminating Michaels before going back to Diesel, only to get eliminated himself! Just Diesel and HBK left in the match. Sweet Chin Music from Michaels sent Diesel flying over to the top to the outside! And for the second time in history, a single man had not only won two Rumbles, but won them back-to-back.

Diesel started walking to the back as HBK celebrated. Diesel attacked Kama, before he turned and stared intently at Michaels. He walked back to the ring, as Michaels started stripping for the girls in the audience. Michaels noticed Diesel in the ring and looked worried. After a long pause, Diesel extended his arm upwards. Michaels ran up, jumped, and high-fived his friend! Certainly .. a different type of ending to a Rumble. Diesel exited the ring so Michaels could have the spotlight.

I enjoyed it for a few reasons. They let the ring fill up a bit at the start, which put a lot more participants on an even playing field. The addition of theme music enhanced entrances. Seeing the debuts of many talents who we consider legends and Hall Of Famers today. Putting the time between entrants back to 2 minutes gave more time for action and funny spots. However .. there is an underlying tone, and you may like/dislike it depending on how you feel about backstage cliques.

What struck me about Rumble #96 is how heavily focused it was on Shawn Michaels, Diesel, 1-2-3 Kid, Razor Ramon, and Hunter Hearst Helmsley. While Yokozuna and Vader were in there, they were eliminated at the same time by the smaller HBK. No one else stood out (except perhaps Bob Holly), because The Kliq took all the spotlight. Despite only being a mid-carder, Hunter lasted longer than anyone. Razor wasn’t even part of the match, yet got more reaction than half the roster. Steve Austin should have been in the mix, but an accident caused him to be eliminated early.

Nevertheless, all the wrestlers worked well. The guys who were brought in to fill the gaps played their parts well. Dory Funk Jr needs a special mention because it was one of his last matches, and he was almost 55-year-old with well over three decades of experience. Also, Isaac Yankem AKA Kane got his first elimination of many. There’s a lot to enjoy about Rumble ’96 and I recommend it. I’m not writing as much these days as I’m working on other things, but I will give Rumble ’97 a watch soon and have it posted sometime early March. Thanks for reading! Much appreciated. Here’s a link to the edited version of the Wrestlemania article of the same year. >>> Wrestlemania XII 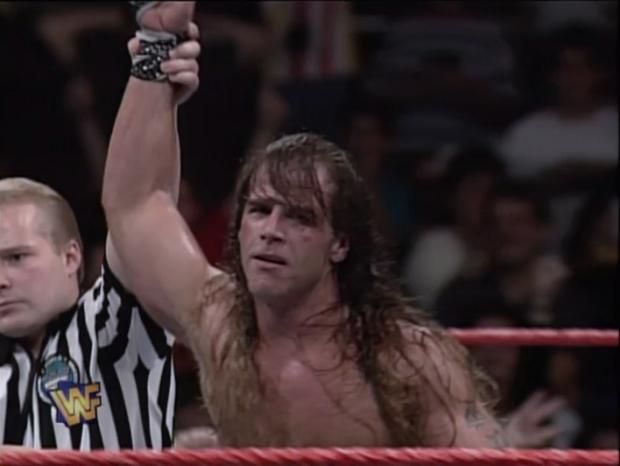