Been busy lately so apologies for the lack of articles from your favourite EWN writer. Today, I’d like to do a short piece on creative writing for Raw, Smackdown, NXT, and how they’ve changed over the past 6-12 months. For a long time, Raw suffered with the Dave Kapoor (stage name Ranjin Singh) problem. He was unimaginative as the shows head writer, and eventually replaced by Ed Koskey. On the main roster, writers get together and pitch their scripts to Vince .. who then decides if he wants to change things; this continues to happen for Raw and Smackdown.

One man has done great things and continues to do so .. Ryan Ward. He worked his way up as a creative writer in WWE, eventually landing the lead writer role on NXT. While Triple H had to approve his ideas, he had freedom and no one could spoil his vision. He was also the lead writer of Total Divas for a while. Ward did such a great job he was promoted (around the time of the brand extension) to Smackdown Live and given the title of Lead Writer. Around the same time, Brian “Road Dogg” James was given a promotion with an unknown title, and has since started (since Michael Hayes isn’t in the office as much these days) reading Smackdown scripts and giving feedback from a talent’s point-of-view in meetings. This may help Smackdown Live as James is good friends with Triple H and Vince can trust his word .. meaning Smackdown scripts may not get edited as much as Raw’s.

With Triple H and Road Dogg vouching for Ward’s creativity, it translates well on television. Smackdown Live reminds me of how NXT was before the brand extension .. although it still has some very clear “Vince” moments (Nikki Bella/Natalya reeks of him) which will always leak through. Also, Smackdown is only two hours with some of the promotion’s biggest names to work with. I’m not sure why he was there, but the last time we saw Ryan Ward on-screen was in a backstage segment on Raw with Chris Jericho on October 24th. “I think I saw someone with the list.” He’s also appeared on Total Divas with Eva Marie. 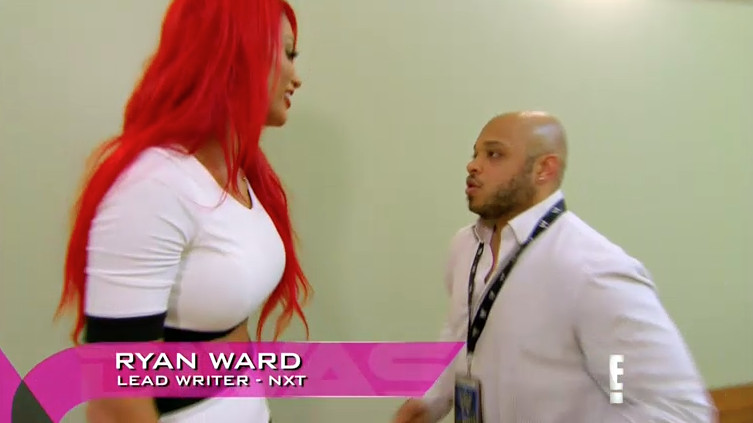 I believe WWE has started changing the way they write Raw as last week’s was a definite improvement. Of course, this is speculation .. but I find it really difficult to believe it was Ed Koskey or Vince McMahon who came up with the idea for the “List of KO”. The way the segment was wrote .. reminded me of NXT promos and how Smackdown Live is now. They’ll have seen comments from fans saying Smackdown is the better show .. just because “it flows better and has better creative/timing”. What I hope, but cannot yet confirm .. is that Raw wants what Smackdown has, and is making small steps to improve the creative process whether it be approaching it differently or giving wrestler’s freedom to pitch ideas.

Either way, I am thoroughly enjoying WWE at the moment. Ten years ago, I would’ve called it a piece of crap as the writing was horrid and predictable. Nowadays, it seems like NXT has done wonders to the creative process, and we are beginning to see the benefits on the main roster. I’ll be looking at small details during Raw tonight, to see if the KO/Jericho segment was a one-off or the start of real change. For those who missed it, you must watch it (or Y2J will put you on the list!) in the video below as I believe it’s one of the best segments of recent times. Thanks for reading! I’ll try to deliver a few more before the end of the month.