Hi everyone! Got a fun one for you today as we delve in to the rich history of pro wrestling video gaming. So it makes me feel a little old .. but to keep this “classic”, I will not include any games released in 2004 or later.

We’ll be looking at the impact each game made, as well as their rosters & features. You can find many lists like this strewn across the internet .. but I’m going one further. For each entry (when applicable) I may give some instructions on how to pick up and play them. I cannot in good conscience make this a top 10, as we all have our favourites and we’ll only end up arguing til we’re blue in the face. 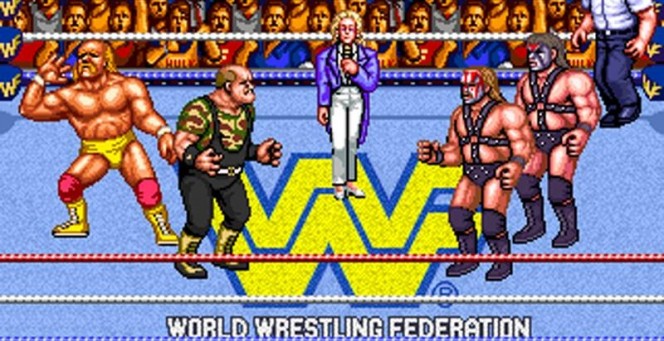 A bit before my time, but one that is a firm favourite among those who were lucky enough to play in the Arcade era. It was a sequel to WWF Superstars and featured a bigger roster. It supported up to four players, so you could imagine kids jockeying around the arcade to have a go. But while the gameplay was decent, some criticized the way you had to keep pumping in coins mid-match if you were knocked down. This of course, weeded out the good players from the bad. The good players knew how to avoid it, while the bad grew frustrated over how many coins they’d lost. That’s what arcades were like though .. you had to play well or face having to go home begging for change. Addictive arcades were the bane of parents.

I’d never played this before today so I had a go in a Royal Rumble match. As Hulk Hogan, I struggled to figure how to do anything but punch and get up. I was almost pinned too! In a Rumble! But what I did notice was how good it looked, and how well it played considering it was released in 1991. I’m sure if I took the time to figure it out I’d have a better experience, but then again .. I’d rather play it as an arcade. That’s the point .. you play it in public with your friends and they offer tips. I’ll never get the full experience, so I cannot adequately describe how good it was in its day.

Luckily I managed to find a cool site which has this game ready to play with no downloads or sign ups necessary. Not sure why, but I was getting a few drops in frame rate. Playable though. If you know any better way to play this, let me know and I’ll add it: WWF Wrestlefest Game

No lie .. this is AJ Styles’ favourite wrestling game of all time. If you’re a Japanese fan (or knew someone who could port them) you likely grew up playing this or the first. Released in 2000 for the N64, it followed in the footsteps of other games featured later in the list. It handled exactly like they did (with the AKI Engine), except features like Create A Wrestler was expanded upon.

In typical Japanese style, it added things like crowning Triple Champions and competing in cup trophy tournaments. One of the coolest things about VPW2 was it featured a huge roster of wrestlers working for ten(!) promotions AND a bunch of legends (98 overall). Also, it allowed dangerous moves like the Burning Hammer which were banned in WWE.

That’s one stacked game! No wonder why AJ thinks it’s phenomenal. But because the game was only released in Japanese, there is no English version of it. If you can read Japanese .. or just so happen to remember where all the menus were on WM2000, you’ll be able to play it well with this ROM: Virtual Pro Wrestling 2 – Otherwise, you’ll get a similar experience with other AKI Engine games.

Probably the worst game here in terms of gameplay & atmosphere, but is remembered because it was one of the better wrestling games on the Playstation in 1999. I know this as it was one of the first PS games I ever played, as my friend crushed me countless times before I could get to grips. The poster boy of the game? “Stone Cold”. Steve-a-mania was running wild .. and everyone wanted to play his character so they could do the Stunner. We looked at the faces on the characters with an “ooo” and an “aahh” .. look how realistic it is! Those graphics, wow. Doesn’t look great now like .. but back then it was amazing.

As a sequel to WWF War Zone, Attitude expanded on its features considerably. Being able to “Create A Wrestler”? Holy Bleep! Much time was had creating ridiculous characters with even more ridiculous movesets. You could create a stable .. a PPV, and even an arena! Yes, you could customize the lights, the ring ropes, all kinds of stuff way ahead of what anyone had experienced before.

While the gameplay wasn’t the greatest, the other features and match types made up for its shortcomings. While The Hardys were not playable in the game, they provided motion captures for the moves. Also, as Owen Hart died just before release, the game was postponed and the opening video included a tribute to him. He was originally meant to be The Blue Blazer in the game, but his outfit was scrapped and his character reverted to being a “face” to honour his memory. There were a bunch of other features removed from the game last minute without explanation: like being able to fight backstage, the Hell in a Cell match, “jobbers”, and certain wrestlers.