Home Articles The Machine: A Look At Brian Cage’s Career. As we head towards Impact Wrestling’s Homecoming from The (TNA) Asylum, Brian Cage is reaching for the sky after vacating the X-Division title (“Option C”) to get a shot at Johnny Impact’s World Championship. Let’s take a look at highlights of his career, and see his transformation from indy regular to Impact Wrestling #1 contender.

As a young fan, Brian Button regularly attended WWE shows. One night at Raw, he got his sign noticed by Chris Kanyon and they became friends after the show. Kanyon was interested in his dreams to become a wrestler, and with his help they opened a promotion with friends in the area called the Main-Event Wrestling Federation. Kanyon agreed to lose to Brian in his first match, and again at their second show.

Cage got some experience and started training elsewhere. He also worked for other promotions before being called up to Deep South Wrestling; WWEs development territory. He didn’t earn a contract, but he got to work with several WWE stars before the company cut its ties with DSW in 2007. In the interview below, Cage explains the relationship he had with his friend Chris Kanyon.

Luckily WWE signed him to their new territory Florida Championship Wrestling in the summer of 2018. He was asked to change his name, so he came up with Kris Logan as a tribute to him. Logan’s biggest success was winning the tag team titles with Justin Angel (aka Justin Gabriel) against The Dudebusters, but they could only hold on for a night before losing the belts to The Rotundo Brothers (Bray Wyatt/Bo Dallas). In 2009 Brian was close to debuting a character called “Night Claw”, which would’ve feuded with The Hurricane as a super villain. In an interview with The Roman Show, Cage explained how Dusty Rhodes pitched the idea to him:

“Dusty (Rhodes) pulls me into the office and he goes ‘let me tell you something baby. You’re a phenomenal worker. But you got to have something else; you got to have some character. You can’t be the Wolverine because that’s trademarked. You got to be something else like the Wolverine,'” said Cage. “So I go back and I was looking through all my trading cards and comic books and I’m like ‘duh…I’ll be Dark Claw’ which was the Batman and Wolverine combination,”.”

It didn’t go ahead as planned due to WWE’s shock decision to release him from contract in September. He had no choice but to return to the indy scene. Returning home to the promotion he founded, Cage won a cup trophy in a tournament featuring Joey Ryan and TJ Perkins. Pro Wrestling Guerilla signed him in 2010 and placed him in a stable with Chuck & Ryan Taylor (Fightin’ Taylor Boys). They were regularly featured but never found title success. 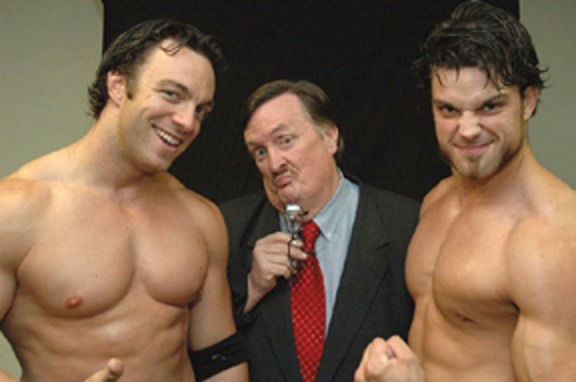 Elsewhere, Cage joined the NWA Hollywood promotion where he was paired up with Shaun Ricker (aka Eli Drake) as the Natural Selection, a tag team managed by Percy Pringle AKA Paul Bearer. They became the first NWA Heritage Tag Team Champions, and held them twice throughout most of 2010 and ’11.

The team split by the end of 2011, possibly due to Percy’s health. In 2012, Cage received his first world title shot in PWG against the champion Kevin Steen (Owens). Watch out for the familiar catchphrase in the interviews!

Despite the hype behind him and TNA’s repeated interest, Cage did not get signed in three attempts between 2012-2014. He trained harder and put on muscle to look more like a heavyweight. His biggest moment on TV was on TNA Gutcheck in 2013, where he lost out to Jay Bradley for the contract. The fans popped loud as Bruce Prichard talked about his match from the previous week before telling Cage he had not made the cut.

Between 2014-2017, Cage trained even harder and put on more mass. Lucha Underground, AAA, and Pro Wrestling NOAH all brought him on after showing interest. Having already proven himself as a high-flyer, Cage knew he had to take on a new approach to compliment his heavier frame.

Working for many promotions was of great benefit, as he got plenty of time to adopt a new arsenal of moves. The video below shows some of the moves he worked into his repertoire, many of which he still uses. His physique and moveset earned him the nickname of “The Machine”.

2018 has been the best year. I think he’s finally found the validation he was looking for. It took many years of hard graft both in and out of the ring to get Impact to notice, and in January he finally made his debut as a full-time wrestler. He started out beating up jobbers til a brief backstage encounter with (Bobby) Lashley lead to a main event match. And Cage didn’t just beat him once clean .. but twice, in as many weeks.

It wasn’t long before he was beating Matt Sydal for the X-Division title. He didn’t defend it often (which Austin Aries oddly blamed him for), but was regularly featured on TV and around the world as Impact cross-promoted with House of Hardcore, Lucha Underground, Pro Wrestling NOAH and more. And with Austin Aries paving the way for “Option C”, Cage took it on himself to cash it in for a World title shot.  Fourteen years of passion for the business has led to this moment, and I’ll be surprised if Impact doesn’t give him a chance with the World Heavyweight Champion. Many predicted he would win it right away, but it could end up being on the one year anniversary.

In October, Cage sat down with Stone Cold Steve Austin on his podcast and discussed many subjects, including Kanyon’s suicide in 2010. I recommend giving it a listen if you have the time. Skip to the 13-min mark to avoid the adverts: Stone Cold Podcast with Brian Cage

I think at heart, he’s still the young fan holding up his sign for his hero to notice. And if he can do that for the next generation of kids, so they can one day tell others he inspired them? Well, that’s what life’s about. As a World Champion? To be a fraction of what his heroes were? It’s gotta be his lifelong dream coming true. In memory of his mentor. “Who Better Than Kanyon?”. Mortis RIP.