I have given up writing the secret diary series, and instead, I will randomly pop up from time to time to deliver my opinions on any subject I feel like touching upon.

I want to talk about WWE Smackdown. As a wrestling fan, and a fan of being entertained, I have to say, WWE Smackdown has become an afterthought.

I remember back in 1999 when WWF Smackdown aired. The Rock claimed it was his show, and you really had to watch Smackdown, because Raw is War was so amazing, so Smackdown had to be just as good.

Back then, they treated Smackdown as it should be, an equal to Raw, a show that would continue the same intensity and deliver some great matches/moments. Did you know Mr. McMahon won the WWF Championship back in 1999 on an episode of Smackdown? I could not imagine an event like that happening on the Smackdown of today.

Smackdown began its existence trying to seperate itself from Raw with the “Ovaltron”.

It was different to Raw, but it delivered the same intensity and entertainment value. This look ended after Rhyno gored Chris Jericho through the center screen. This event led to Smackdown using the “fist” titantron seen above, one filled with many fond memories.

Smackdown became its own animal in 2002 when Brock Lesnar won the Undisputed WWE Championship. He refused to defend the title on Raw, which led to the creation of the (Big Gold Belt) World Championship, which would be defended on the Raw brand.

I have to say, if there was any moment that Smackdown could be seen as superior to Raw, it was at this moment. Brock Lesnar and Kurt Angle had an excellent feud over the WWE Championship, they fought for over a year (with the exception of Big Show holding it at one point), and fought at such venues as Summerslam, Armageddon, Vengeance and Wrestlemania XIX. They even had a 60 minute Ironman match for the WWE Championship on Smackdown between Angle and Lesnar! 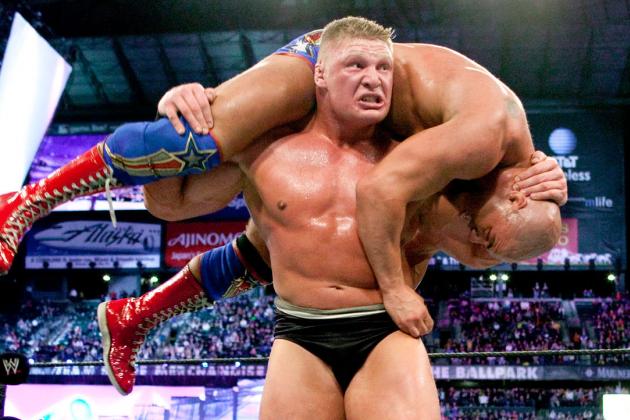 It didn’t end there for Smackdown. We would see champions such as Eddie Guerrero, JBL (longest reigning champion in Smackdown history) and the new kid on the block, John Cena.

After Cena was drafted to Raw, Batista brought the World Championship to Smackdown, and he fought hard to retain it until he picked up a triceps injury.

Smackdown went a little downhill after that, with the WWE Championship becoming the priority. Angle, Mysterio and King Booker kept Smackdown going until the almighty clash over the World Championship between Batista, and The Undertaker.

The Undertaker played a huge part in the continued success of WWE Smackdown during the brand extension. As one of the WWE’s biggest legends, the fans knew if they watched Smackdown, they may have had the chance to see The Undertaker do something special. He would come and go, but we always knew the WWE had him to fall back on when they really needed it. He helped to put over talent like Batista, The Great Khali, and Edge.

In 2008, the championships switched over again, which allowed Triple H to defend the WWE Championship on Smackdown. We got to see Edge become a champion on Smackdown again before it was drafted back again.

Regardless of what happened, up until this point, Smackdown had been treated with importance and you had to tune in to witness history being made.

The last two great feuds on Smackdown (over the World Championship) happened between CM Punk/Hardy in 2009, and Christian/Randy Orton in 2011. Punk and Hardy was so great because they were so different, and both men contributed greatly to it. Christian and Orton was great because the fans really wanted Christian to be the champion after so many hard fought years in the business. He would be denied by Orton on an episode of Smackdown, and this caused a huge stir from the fans, including myself.

As time continued on, the brand extension faded away, and with it, the magic of WWE Smackdown.

I have not watched Smackdown every week for a few years now, and I am happy about that. I do admit, sometimes they have a great episode of Smackdown, but most of the time, it’s something we could miss and it won’t be much of a big deal.

The thing is, the WWE makes such great hype videos, if anything of value did happen on Smackdown, we would see it anyway, either on Raw, or at the PPV.

I listened to last nights Smackdown as my 50 year old father watched from his laptop. I was not impressed. I didn’t even need to watch it to know how it went down, and it felt like another throwaway Smackdown episode.

Jericho vs Orton was probably the only reason to watch the show, but I can bet you, expect this match to happen again on Raw sometime soon. WWE has a nasty habit of booking matches on Smackdown, only to repeat them (mostly main events) on the following Raw.

I didn’t hear anything else that was too interesting, apart from the Rusev/Reigns stuff, but at the end of the day, when you see Reigns vs Rusev as a main event on a Smackdown, you can never expect it to end any other way. The DQ finish was necessary and predictable, and it was a big disappointment to my father. His exact comments were … “the match was great until the end, disappointing”.

A Smackdown should not tease matches like this, only to throw it away at the last moment, it leaves the fans disappointed, and gives them a lack of faith in the booking. The booking on Smackdown has been poor for a long time, Smackdown used to be about the wrestling and the competition, but you point out one decent wrestling match produced by Smackdown in the past few months that people are still talking about.

Smackdown had a severe lack of talent working on the show this week, and Smackdown continues to be the “C” show (I say C show, because B show would be too much of a compliment) that is only there to show what happened on Raw, and maybe give us a decent match when it can be bothered too.

After reading the “horrible attendence” news article, I ain’t surprised. I would not pay my hard earned money to see a Smackdown, I would rather save that money and go to a Raw, a show they actually care about most of the time.

It’s a rather simple concept for Smackdown. Defend the championships more, allow more title changes to happen on Smackdown. Continue storylines on Smackdown, not with little nudges, but with a decent push, as you can easily miss a Smackdown nowadays and watch Raw every week, and you won’t have missed much at all. An even better idea, take NXT wrestlers, those wrestlers who continue to tear it up and produce excellent matches, and put them on Smackdown. Fans will tune in to see these guys, especially the wrestling enthusiasts, and once again, Smackdown becomes cool and relevant.