As a British fan I feel proud of what we saw at NXT Takeover: Chicago. I’ve read some comments from fans saying they can’t understand why the UK division exists and how it differs from American Wrestling. Does it deserve its own division? Why can’t wrestlers outside the UK challenge for the title like the United States Championship? The aim of this article is to explain how it differs and why it’s deserving of the hype.

There’s two reasons why the division has excelled to this point; Tyler Bate and Pete Dunne. Of course, I’d be lying if I said William Regal, Trent Seven, Triple H, Nigel McGuinness, and Jim Ross did not contribute in some way. Michael Cole was genuinely excited to call the UK tournament in January, and Jim Ross returning to WWE to partner Nigel for UK events is telling of the excitement he feels from calling something new.

American Wrestling has been on our screens for decades. It has nothing to prove, it’s a cash cow which even through bad times manages to sell tickets and merchandise. American Wrestling has always prevailed over its competition .. including British wrestling. It’s known that UK wrestling devolved in to a circus act with the likes of Big Daddy and Giant Haystacks colliding like a bad Godzilla vs. King Kong movie. Initially, the attraction of these huge men drew big time, it brought British wrestling to the mainstream audience. However, it did not keep up with the times, which lead to future stars like Davey Boy Smith and Dynamite Kid moving elsewhere as they knew British Wrestling was a lost cause.

Why would you pay to watch two giant sweaty men work lazily for a minute when you could tune in to the WWF? Hogan, Warrior, Savage, André The Giant etc. Not only that, but the NWA/WCW had Flair, Sting, and others drawing big time money. Fans were getting their money’s worth with American promotions, while British Wrestling offered nothing new. American promotions figured out how to sell wrestling to the world while British promotions struggled to evolve passed what they knew. 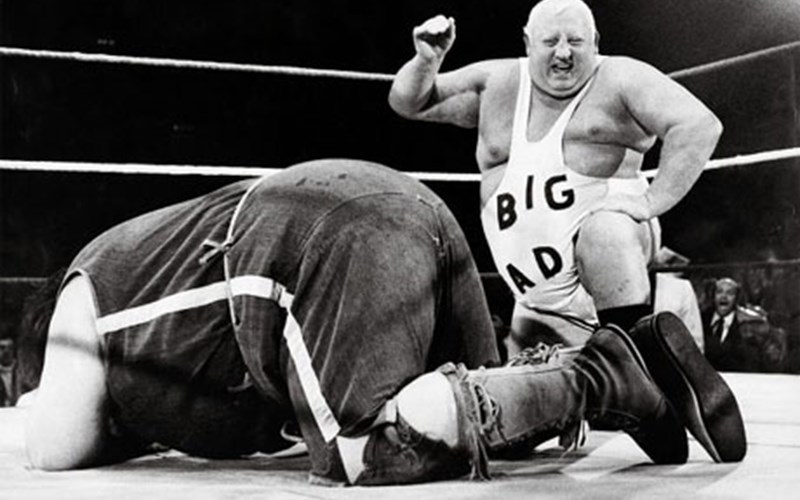 And since those days .. wrestling in the UK has been a niche market. British fans have gradually become hungrier for decent wrestling. Some may have grown tired of the same old, clichéd manner in which American promotions operate. And not just UK fans, but fans from elsewhere have grown tired as not much has changed over the past twenty years. This is why some have chosen to go further, they’ll watch independent promotions or look overseas to find quality professional wrestlers. To them, sports-entertainment has become the circus act. Perhaps not on the level of Big Daddy vs. Haystacks, but enough to dissuade them from tuning in each week.

And then there’s the problem with over-saturation; especially in WWE. NXT is refreshing as it’s not booked by Vince and is produced like a pro wrestling show. Raw, Smackdown, 205 Live, all the PPVs .. there’s too much content for the average viewer. 205 Live isn’t bad at all, but the cruiserweights show up on Raw and get “boring” chants. It has not done enough to define itself other than having a purple colour scheme with a weight limit. I love Neville .. but I’m already tired of his title reign. Aries feels wasted, as does Jack Gallagher to some degree. The lack of evolution means 205 Live is already running out of steam. 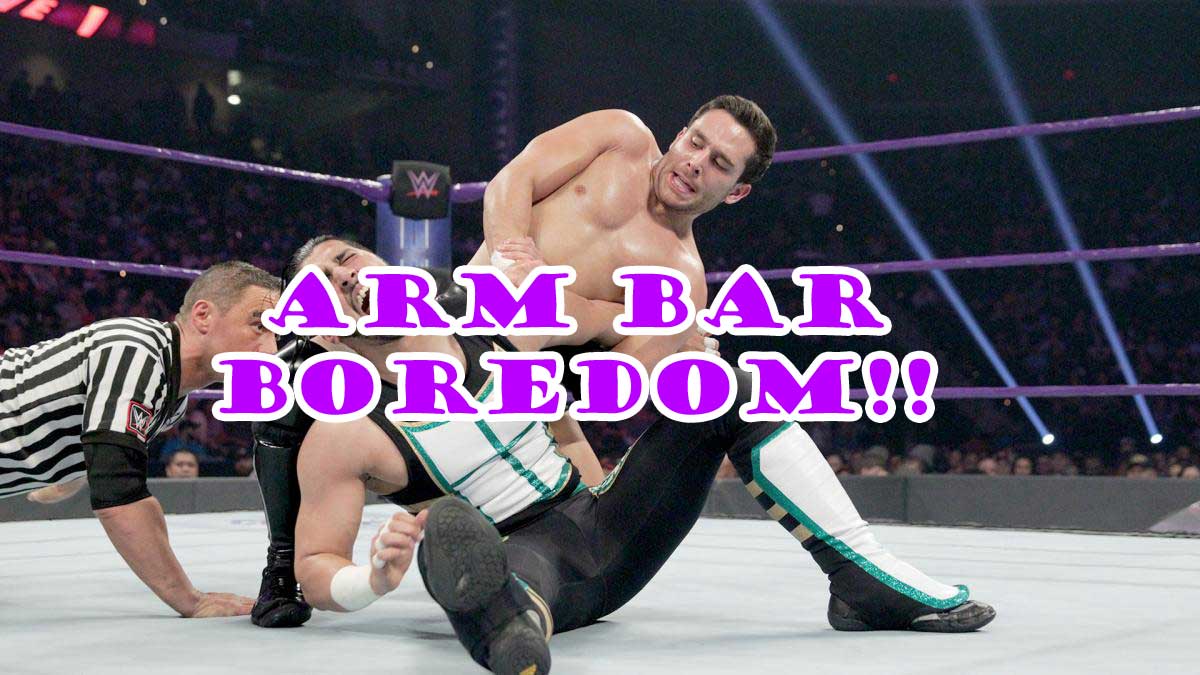 The UK division has been different because .. ever since Tyler Bate was crowned UK Champion in January we’ve had no choice but to wait patiently. The style is different. The crowds are different. The show may be produced like NXT, but the talent do not work the same. On the first UK Championship show on the network I was disappointed with the 205 Live wrestlers as I found them out-of-place. I’m not sure what they added to the show. I didn’t care to see them as it’s not difficult to find them on Raw or 205 Live.

WWE found two gems from the UK scene, guys who worked hard to make it where they are today. Pete Dunne the mentor, and Tyler Bate the student. Their encounter in January shocked the world; it was one of the best matches of the year. They took it to a level we have not seen in WWE for a long time. It’s not just about what they did, but the way they sold it to the audience. Unlike Big Daddy and Giant Haystacks, Bate & Dunne were determined to give fans their money’s worth. Respect is the most valuable asset behind their match at Takeover: Chicago. Despite being 19-years-old, the fans found Tyler deserving of being crowned the first UK Champion as he’s better than he has any right of being for his age. Pete Dunne is something else .. he’s got one of those faces only a mother could love .. but his intense Bruiserweight image compliments it. I’ve said it a few times already, but Dunne is like one of those typical idiots who sprawl the streets on a night out to pick fights. He looks and acts like what us English would call a prick (wanker would be too nice) .. but he makes up for it by being a deadly technician who literally tortures opponents with joint manipulation.

What isn’t clear from looking at these men in pictures is their chemistry. It’s like Luke Skywalker vs. Darth Vader. Coke vs. Pepsi. Mario vs. Bowser. Batman vs. Joker. Rivalries which could go on, and on through the annals of time. The “Fight Forever” chant they received proves this. It feels strange when they wrestle different opponents, as we’d much prefer to see Bate vs. Dunne over Bate vs. Seven, or Dunne vs. Mark Andrews. We know they can have solid matches with almost anyone, but we want to see more of their rivalry.

And unlike 205 Live where Neville is still lording over the cruiserweights, Pete Dunne defeated his student at the right moment. You could see the emotion pouring out of him as he went for the pin-fall which sealed the deal. If he wasn’t such a hard-faced heel, I like to believe he would have shed a tear. Just like Bate, Dunne has proven himself worthy. And it’s brilliant because we know this is only the beginning of an exciting rivalry. It’s refreshing, it’s different, and is exactly what WWE needs. I can’t understand how anyone could not have bought into this .. but if you haven’t, I highly recommend watching their first match in January and the return bout at NXT Takeover. 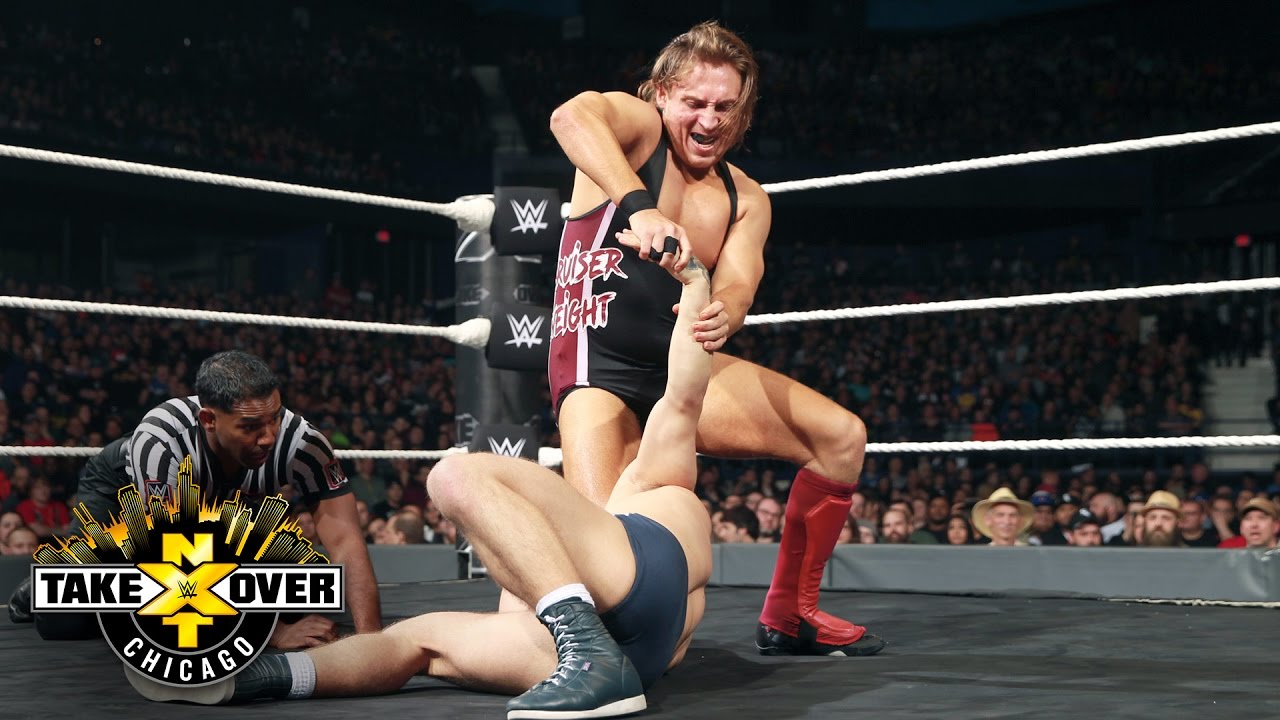 I can’t sell this anymore than I have. I want to believe it is the start of something which will spur British promotions on as these guys pave the way for the next generation. It gives hope to young kids that they can realize their dreams. We haven’t had a lot to cheer for since The British Bulldog fought Bret Hart at Summerslam ’92 in Wembley Stadium. We’ve never really come close to seeing a British World Champion crowned in WWE.

Perhaps one day .. Tyler Bate or Pete Dunne can break through and prove British talent should be held with higher regard. The only way WWE can maintain relevancy is to evolve with the times and incorporate different styles from around the globe to emphasize the word “World”. Hell .. go one further and sell out Wembley with Wrestlemania. It wouldn’t be difficult .. UK fans are hungrier than a Ryback who hasn’t eaten for weeks. We’ll take anything we can get .. to show our love, as we know it’s likely the only time we get to do it. We have the loudest crowds because we are deprived. Will WWE finally notice this and take a leap of faith? Only time will tell. I’ve said enough, so I’d like to see if you can expand on this. Wherever you may be .. thank you for reading! Cheers.