With Seth Rollins’ loss to The Fiend, it marked the end of his second run as Universal Champion, and if you ask me, it did not go nearly as well as I expected.

Before Rollins won the Universal Championship at WrestleMania, he was in a bit of a drought. The last time he held a world championship was at Money In The Bank 2016, when he defeated Roman Reigns for the WWE World Heavyweight Championship. However, that wasn’t a proper reign as Dean Ambrose (Jon Moxley) would cash in on him directly after. Prior to that, his first world title win came at WrestleMania 31.

That means between WrestleMania 31 and WrestleMania 35, Rollins went nearly four whole years without winning a world championship. With that, I wasn’t able to fully evaluate how Seth would fare was a main eventer. Something just did not connect with me as soon as he defeated Lesnar, and hindsight has become 20/20.

I’d like to take you back to last year in 2018, which I maintain was Seth’s best overall year. Why did I enjoy Seth so much better last year as opposed to this year? Seth wasn’t really a “main-eventer” last year, but he took on the role of the workhorse mid-carder. He became a Grand Slam champion when he defeated Finn Balor and The Miz at WrestleMania 34 to win the Intercontinental Championship.

Rollins was the best version of himself last year. Instead of ascending to the top of the card and falling to main event stereotypes, he was putting on tremendous work. He would hold Intercontinental Championship open challenges and would frequently put on PPV-caliber matches against the likes of Finn Balor and Kevin Owens on RAW for free on a weekly basis.

This was also the year where he defeated Roman Reigns and John Cena clean in back to back matches in a gauntlet match. I believed this to be Rollins’ arrival as a long-term star, because he was going through a bit of a slump and misdirection for a while up until that point. You can actually read my article on that here.

So between him giving prestige to the Intercontinental Championship, putting up consistent performances in the ring and him not really talking all that much, Seth was the ideal babyface and caught his stride. Then came this year. 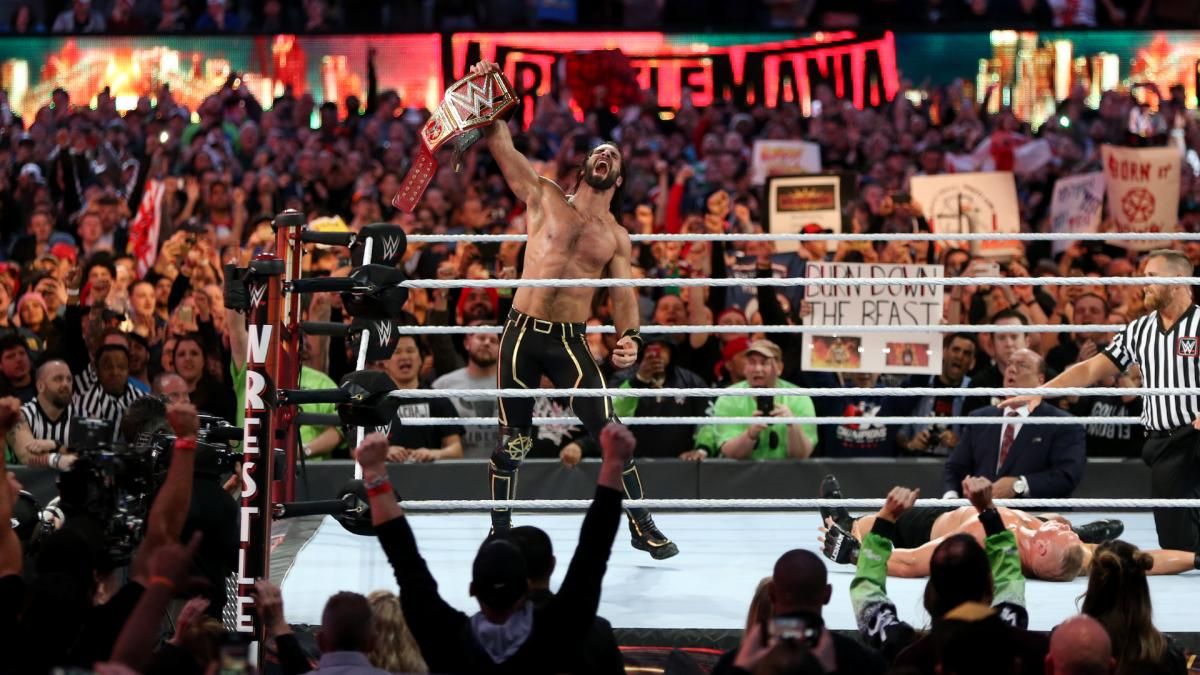 We all pretty much knew that Seth would be winning the Royal Rumble this year and starting a feud with Lesnar over the Universal Championship. However, when he won, I instantly started to see an individual transformation, and not for the better.

We should get the obvious out of the way first. Rollins sucks at cutting a promo. First off, as a babyface he panders way too much. I know this is a common thing with top faces in the crowd, but this year especially, he’s been pandering to the crowd much more frequently and has been looking for ways to get cheap applause. That is usually a sign that you have to compensate for a deficiency in your ability to connect with the crowd beyond a superficial way.

He also just happens to be very bland. The best promo cutters in the industry are able to create a connection in some way. With Seth, it just feels by the numbers as possible. It is one thing to be good, and it is another to be bad. However, with Rollins, he is in that dangerous middle line where he is painfully average. This means that he’s not good enough to make us feel deeply about something he said, but he’s not bad enough where we can at least think what he said was memorable. In the end, everything just seems uneventful, flat and meaningless.

Take a look at this attempt to plug his match with Lesnar at WrestleMania.

From the childish, facial mannerisms to the generic face tropes that he displays here, this promo was straight out of the John Cena circa 2012 playbook.

You will hear far worse people cut a promo than Seth, but if you’re counting on him to make a huge match feel important, he definitely wouldn’t be your first choice. Last year, Seth didn’t have to do these kinds of things because he wasn’t feuding over the Universal Championship. He would just say a few things here and there and get straight to business. Giving Seth an elongated time to cut a promo is looking more and more like a bold decision.

Another staunch difference I’ve noticed from Seth is the decline in the quality of his matches. Now, this isn’t entirely his fault, because sometimes, certain guys don’t work together. For example, he and Baron Corbin CLEARLY do not work together.

His matches haven’t been bad, per say. For the most part, however, he’s just been painfully average in the ring. Oftentimes, it just feels like his match passes by with nothing happening.

Last year, his matches more often than not had a certain energy to them. It seemed like every other match he was putting on was near four star quality. He was a workhorse in the truest sense of the word. When he’s motivated, he can still go out there and put on great performances such as his match against AJ Styles at Money In The Bank or against Brock Lesnar at Summerslam.

However, those performances have become too few and far in-between. Every week on RAW, it feels like all of his matches have been ending indecisively or without any sort of drama. Basically, it’s boring, which sad for someone of Seth’s caliber.

Overall, there is just more nonsense that Rollins is involved in this year. We can start with his feud with The Fiend.

First off, both matches were pretty horrible. I believe I gave his Hell In a Cell match the full negative monty and the Crown Jewel match a DUD. There were both way overbooked, boring and nonsensical in every sense of the word.

Seth isn’t entirely to blame for this. But at the end of the day, you still have to go out there and perform. The fact is Seth didn’t perform his role well at all. An endless supply of curb stomps, boring offense and the bullsh*t story of him questioning his morals and who he is was so beyond the pale for him.

Then, of course, you had that awful, AWFUL storyline with his real-life wife, Becky Lynch. 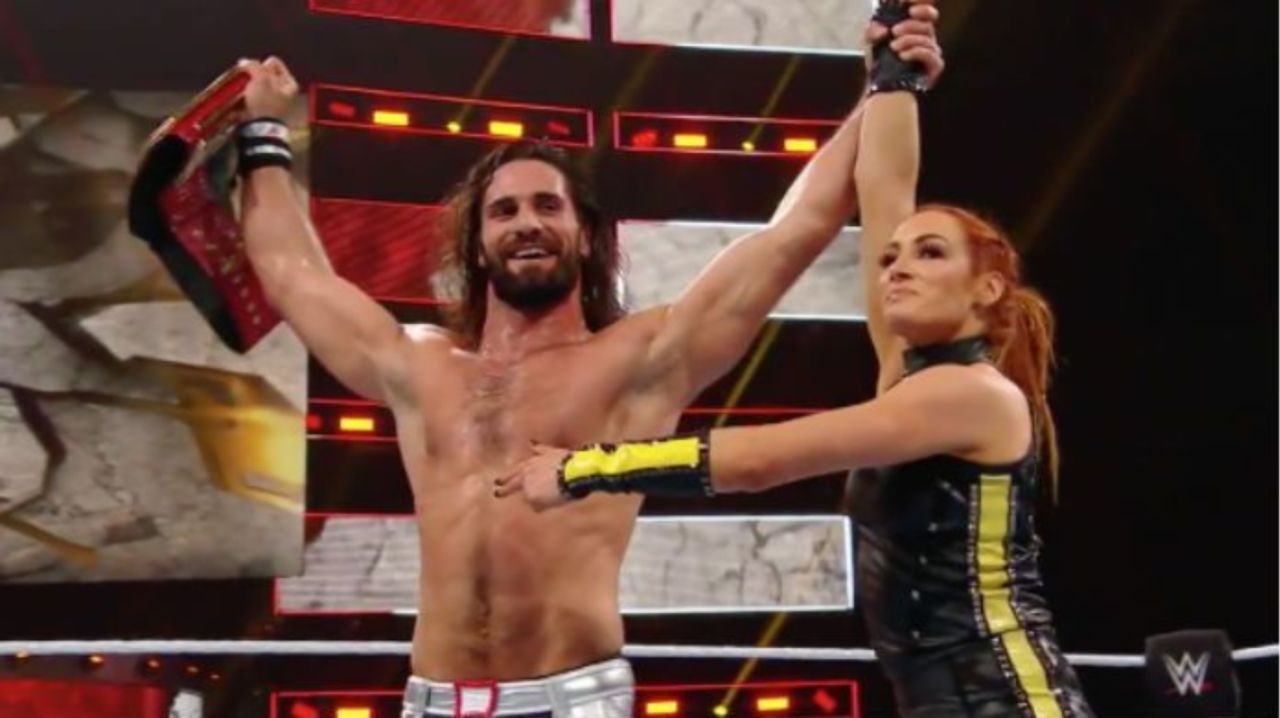 WWE has a tendency to shove popular extracurricular activities involving WWE superstars down our throats once it goes viral. Just like we got endless references to Titus O’Neil’s slip at the Greatest Royal Rumble days after it happened, WWE instantly hopped on the fact that Seth and Becky were an item.

The promos were entirely cringy, the pairing was visibly forced and the two had no chemistry whatsoever. You have Edge and Lita and you have Triple H and Stephanie, but Seth and Becky are clearly a tier or two below.

There are other things that have made Seth’s 2019 main-event campaign a disappointing one. The best way to see it is to watch RAW week after week. It’s gotten so bad that WWE is editing out the crowd reactions they give to Seth. By the way, does anyone think it’s weird that Seth calls himself the best wrestler in the world the same week that CM Punk comes to WWE backstage? Just something to monitor.

Rollins remains one of WWE’s top workers and he has shown that he can be effective in a certain capacity. However, this year has shown me that perhaps he should stay away from the main event spotlight for a while. I cannot connect with his character in a way that I can with others. The experiment was ultimately worth it, if not just to see where Seth can make improvements.

What do you think?