**Videos removed due to being broken. Edited In February 2018.**

Wrestlemania X drew 18,065 fans to Madison Square Garden in New York on March 20th 1994. The build for the event focused on two WWF Championship matches, and the heated feud between Bret Hart and his brother Owen Hart. Jerry Lawler made his Wrestlemania debut on commentary alongside Vince McMahon. Hulk Hogan departed from WWF in the summer of 1993 to film movies and wrestle in Japan (before signing with WCW in June 1994), making the event the first Wrestlemania edition not to include Hogan as a wrestling talent. However he was featured during Gorilla Monsoon’s “looking back” at previous Wrestlemania segments.

Following the Royal Rumble in 1994, The Undertaker was given time off to recover from a back injury, therefore he did not appear at this event. Jim Ross was fired in February, and suffered his first attack of Bell’s Palsy two weeks later. Bobby Heenan decided to leave at the end of 1993, as he was struggling to work long schedules with the broken neck he suffered ten years earlier. He signed with WCW shortly after. Also, Gene Okerlund signed with WCW in 1993 after a contract dispute.ended Gene’s first stint with the company.

After its absence from Wrestlemania IX, the singing of a nation anthem returned as Little Richard delivered an entertaining rendition of “America The Beautiful”. Afterwards a video package aired showing the events leading up to the opening match between Bret and Owen Hart.

Match #1 – Bret Hart vs. Owen Hart (Singles Match) – It’s one of those matches which should have been for the WWF Championship in the main event. This twenty-minute spectacle is often billed as “the greatest opening match in professional wrestling history”. Owen Hart’s Wrestlemania record at this point featured a number of forgettable matches, so he stepped up to the occasion and worked Bret like no one else could. Highly recommend Wrestlemania X for this match alone. And who won? Owen will tell you with a gob of saliva on his cheek.

The Hair Club for Men President Sy Sperling introduced us to The Fink with hair! Crazy times.

Match #2 – Bam Bam Bigelow and Luna Vachon vs. Doink the Clown and Dink the Clown (Mixed Tag Team Match) – Initially I spotted Bam Bam and thought I would be in for another athletic contest with quality wrestling, but Doink’s music played and lowered my expectations. As you can imagine, the match was more about the hilarity between Dink and Luna than the feud between Bam Bam and Doink. It was supposed to be funny and entertaining, but it simply wasn’t.

A Bill Clinton impersonator sat in the crowd and answered questions throughout the night. Those who talked to him assumed he was the real Bill Clinton. Confusing.

Match #3 – Randy Savage vs. Crush (with Mr. Fuji) (Falls Count Anywhere match) – This was Savage’s last WWF match, and the fans were behind him all the way. The stipulations for the match differed to the Falls Count Anywhere known today as pin-falls could only happen outside the ring, and pinned wrestlers were forced to return to the ring within 60 seconds or lose the match.

The crowd was shocked after Crush pinned Savage early on, as a long pause occurred between the pin-fall and Finkel announcing Savage’s return to the ring within 60 seconds. The match was average at best, and Savage won the match after tying Crush upside down backstage. I enjoyed Savage in a match this time around, although I would have preferred a stronger opponent. Nevertheless, the fans loved it and Savage ended his WWF career as a winner.

Match #5 – Men on a Mission (Mabel and Mo) (with Oscar) vs. The Quebecers (Jacques and Pierre) (c) (with Johnny Polo) (Tag team match for the WWF Tag Team Championship) – Surprisingly the match was competitive with several double-team moves, and I enjoyed it. Sadly the match didn’t end clean, but I was pleased with the quality so I can’t complain. More entertaining than other matches on the card for sure. Also Johnny Polo was portrayed by the wrestler famously known as Raven.

Match #6 – Yokozuna (c) (with Mr. Fuji and Jim Cornette) vs. Lex Luger (Singles match for the WWF Championship with Mr. Perfect as the special guest referee) – Yokozuna locked in a trapezes nerve pinch on Luger for a long time. Mr. Perfect decided to engage heel mode and refused to count for Luger. After Luger pushed Perfect for refusing to count, Perfect disqualified Luger and walked backstage. It has to be considered one of the worst matches for the WWF Championship. Shortly afterwards, Luger found Perfect backstage, and the two men were separated as they argued over the decision. Sadly, it was all talk and no action.

Match #7 – Earthquake vs. Adam Bomb (with Harvey Wippleman) (Singles Match) – So apparently this was to set up a feud between Finkel and Wippleman. Earthquake literally squashed Adam Bomb in 35 seconds. I yawned and waited for the next match with anticipation, as Jim Cornette flapped his gums on behalf of Yokozuna.

Match #8 – Razor Ramon (c) vs. Shawn Michaels (with Diesel) (Ladder match for the Undisputed WWF Intercontinental Championship) – Beautiful. The match is rated five-stars by the Wrestling Observer, and is considered the template for all ladder matches to follow it. Although the spots performed won’t surprise wrestling fans today, it was a brand new concept to the WWF and the fans/critics highly praised it. Also they worked the match with one ladder, which showed how keeping it simple means you don’t need 47 ladders surrounding the ring to sell the concept. It’s difficult to say which match was better between the ladder match and Owen/Bret, they were superb in their own right, but the ladder match was much more creative and exciting for the times. It wasn’t your typical wrestling match, it was something else.

Match #9 – Bret Hart vs. Yokozuna (c) (with Mr. Fuji and Jim Cornette) (Singles match for the WWF Championship with Special Guest Referee Roddy Piper) – Bret was looking for revenge from the previous Wrestlemania, and to work a better match. Now Yokozuna had the familiar Bret Hart to work with, he picked up his game and fought. Roddy Piper punched Cornette in the face at one point and knocked him out. After a competitive and decent main event contest, Yokozuna made a mistake and slipped off the turnbuckle. Bret took advantage of the slip and picked up the pin-fall victory and the WWF Championship. 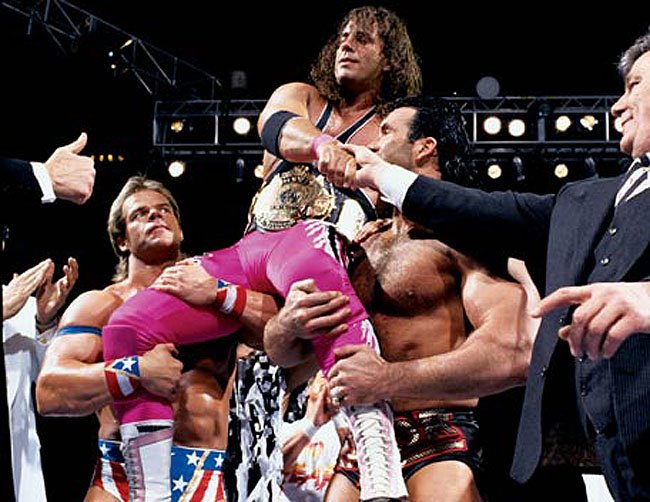 Conclusion– Two excellent matches makes this PPV a highly recommend event. The rest of the card has its ups-and-downs. Bam Bam/Doink, Luger/Yoko Earthquake/Bomb and Blayze/Kai all failed to deliver. Savage/Crush and the tag team title match were rather entertaining, and there was a lack of decent backstage interviews, which was a far cry to previous Wrestlemania.

Also the commentary team was the weakest so far in the series (except possibly Vince and Susan Saint James). Lawler was in typical heel mode, but he was no Bobby Heenan. His remarks and jokes can be described as crude and unfunny. Vince McMahon carried the team, which tells you how terrible Lawler was, but Vince was definitely no Jim Ross or Gorilla Monsoon. The event would have benefited with Jim Ross calling the action, but sadly he was fired.

Overall I enjoyed the PPV. Despite a few weak matches, commentary, and cheaper looking production, Wrestlemania X will always be historic for the rise of Bret, Owen, and the ladder match. Highly recommended watch for any wrestling fan. Thanks for reading!