**Edited As Of February 2018. Cleaned up after deleting broken pics/vids. New Display Pic. Some text may still refer to videos which have been deleted**

Wrestlemania XI drew 16,305 fans to the Hartford Civic Center in Hartford, Connecticut on April 2nd 1995. The card featured seven matches, including an I Quit match, and matches for the Intercontinental, Tag Team and WWF Championships. The main event was a match between former NFL linebacker Lawrence Taylor and Bam Bam Bigelow. The commentary team consisted of Vince McMahon and Jerry Lawler for a second year in a row. The Undertaker made his return to Wrestlemania after his absence from Wrestlemania X. The event also included many celebrities, such as Jenny McCarthy and Pamela Anderson.

Before I continue, I would like to state that I watched Wrestlemania XI last Tuesday. I have been too occupied to bring you Wrestlemania XI, I will do my best to remember my reactions to the events of the PPV. Special Olympian Kathy Huey sang America The Beautfiul to start the show, and it was simply beautiful. Probably the best rendition so far in the series. And then Vince and Jerry made me sigh once more, as I was hoping Jim Ross would be calling the action. Also I noticed a drop in production compared to previous Wrestlemania, they were doing this on the cheap. They did include fireworks before, and after some matches, but I can only remember fireworks after the Razor Ramon and Diesel matches.

You know, I never knew about the tag team of Luger and Bulldog. It was strange, as you never see a tag team be patriotic to America and The United Kingdom at the same time. No idea who the other tag team was, although Zeb Colter was a recognizable face. Also there appeared to be an army of photographers at ringside, who inevitably got in the way at least once.

I can’t remember much about the match to be honest. It sucked so much compared to Owen vs Bret at Wrestlemania X. Bulldog picked up the victory for the team, and the posing afterwards was pretty neat. But yeah .. lame match.

Jarrett, X-Pac and Road Dogg all making their Wrestlemania debuts here. Also sure this is Ramon’s last Wrestlemania appearance. 1-2-3 Kid was wearing some bad-ass looking martial arts ninja gear. I was seriously surprised by the competitiveness and the well-thought out interference. There was clear animosity between the two teams, and although I really enjoyed the match, it ended with a weak DQ when The Roadie interrupted the Razors Edge. Jarrett continued on as a heel champion with Razor Ramon chasing him for it. Also 1-2-3 Kid did this really cool kicking combination at one point, showing he was much more athletic before his D-X days.

Following the match, Shawn Michaels was backstage looking for Pamela Anderson but found Jenny McCarthy instead. Kama (The Godfather) checked the lady out, like he does. 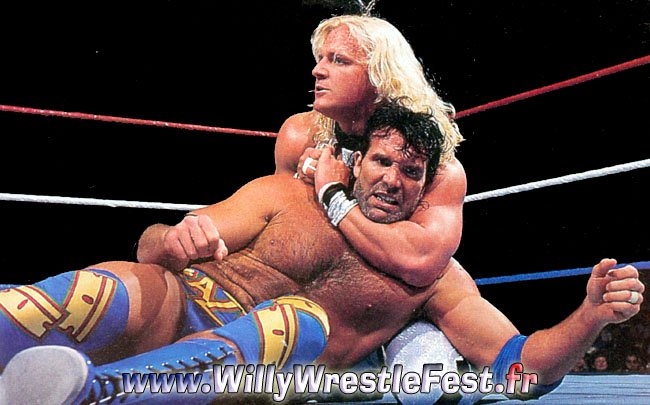 The Undertaker returned! And with an extremely cool entrance as usual. Ted DiBiase had stolen the urn and was managing Bundy (the urn was at least three times bigger than the urn they normally use) to take The Undertaker out. The match was dull to be honest. The highlight was The Undertaker snatching the urn off DiBiase (it was so random and fast, DiBiase didn’t have a clue) and handed it to Bearer … only for Kama to appear, punch Bearer in the face, and run to the backstage area with the urn. Bundy manhandled Undertaker to no effect, as Bundy was out cold from a powerslam and clothesline from The Phenom. The greatest highlight was the celebration, as The Undertaker struck an iconic eyes-rolled-back pose which has been used many times over the years.

And then yeah, we saw Nicolas Turturro looking for Pamela Anderson (she could be anywhere at this point, it’s Pamela Anderson) but instead found Steve McMichael (never mind that shit .. here comes Mongo!) as he hyped the main event. As an avid chess player in my youth, I was amused by the backstage chess match between Bob Backlund and thirteen year old (although he looked much younger) Jonathan Taylor Thomas. Backlund ranted about manners, until Thomas made a move and declared checkmate. Backlund went super heel mode as he blamed today’s youth for his loss. 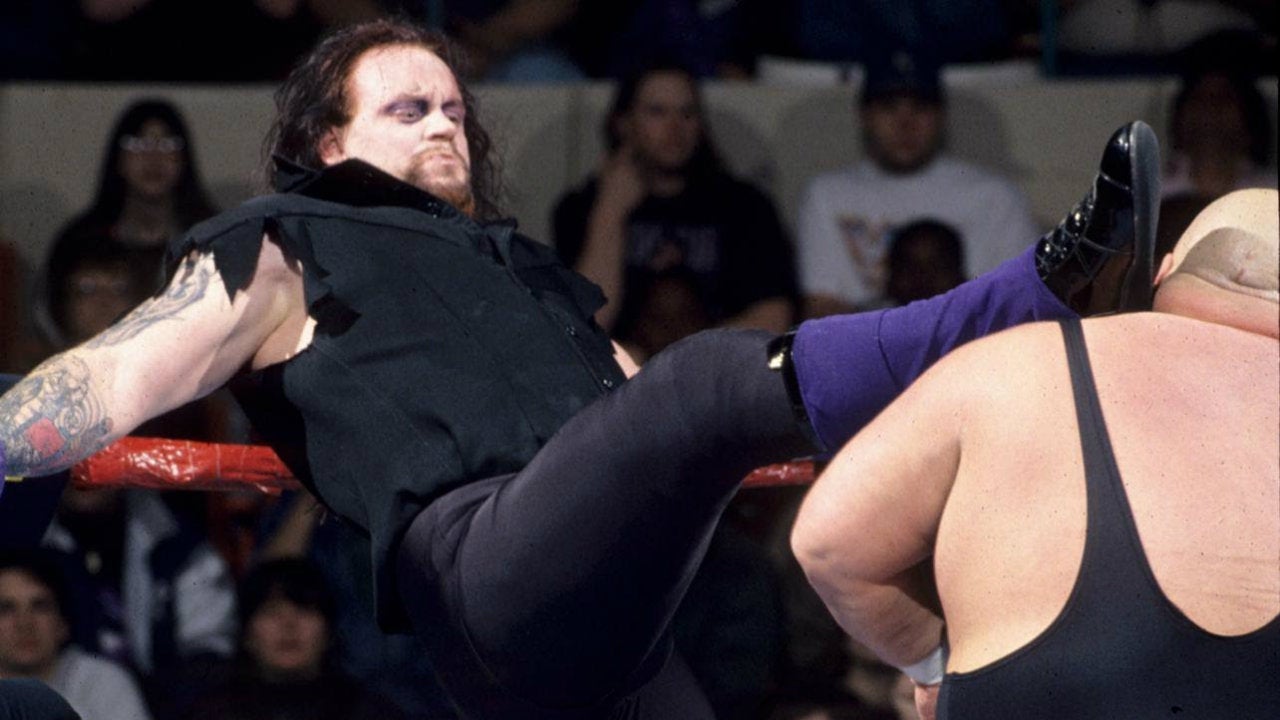 Owen Hart had not announced his tag team partner before the contest, so it was shocking to hear Owen announce Yokozuna, the man who had feuded with his brother over the WWF Championship, as his partner for the match. The result seemed inevitable at that point. Billy and Bart Gunn were making Wrestlemania debuts, but they were not going to leave as champions.

The Gunns managed some neat double-team offense on Owen, but any offense was negated the moment Yokozuna got the tag. Yokozuna literally squashed both men with minimal effort. After a belly-to-belly and banzai drop from Yokozuna, Owen made a blind tag and claimed victory for the team. Owen Hart celebrated with both belts on his own (as Yokozuna rested with his back to him in the corner) for a while until he decided to hand one of them to his tag team partner. One-sided match, mildly entertaining, and the result was an odd tag team holding the gold. Roddy Piper as guest referee. I was expecting more from the match than what we got. The match lacked excitement and was more of an old school match than a brutal I Quit match. Also Piper was supremely annoying on the microphone, as he persistently asked Backlund after (almost) every move “d’ya quit!?”. He wasn’t as annoying when asking Hart if he wanted to quit.

The match did not go over well with the crowd, and I also found myself getting bored. Backlund tried to get the crossface chicken wing finisher but Hart reversed it into one of his own. I never heard Backlund say “I Quit” .. but the bell rang so he must have, or he was screwed. Seriously disappointing, one of the worst I Quit matches ever, and I’ve seen all of John Cena’s I Quit matches.

I seem to remember some backstage segments involving Shawn Michaels and Sycho Sid, with HBK playing the cocky heel, and Sid using his intensity to make me chuckle with delight. His promos were so unnecessarily intense, and I found it humorous.

Yeah, Big Daddy Cool was with Pamela all night long, because he’s awesome like that. This was the year of Diesel, and he was billed as their top star. Nowadays, he would be ridiculed like Roman Reigns for not having the wrestling ability, but to be honest, Diesel could work a great match when you paired him with Shawn Michaels, and that is what we got here, a classic speed verses power match. Michaels was doing all the leading of course, but it takes two to tango. Diesel was moving quicker than I have ever seen him move before, it must have been before he tore his quad twenty-eight times.

During the twenty-minute match, Diesel decided to “hulk up”, which I didn’t really appreciate and neither did the fans in attendance. Diesel finished HBK off with a nice Big Boot, and a horrendous looking Jackknife powerbomb .. he just kinda .. threw Shawn into the air and Shawn did a backflip and fell to the floor without ever reaching Diesel’s shoulders. It was more of a throw than a powerbomb, which really pissed me off because the match had been pretty good til that point.

It told me why the title match was demoted from the main event spot for the event, Diesel wasn’t good enough as champion. Afterwards Diesel celebrated with the celebrities, including Jenny McCarthy, as fireworks were let off around them as they posed for the cameras. 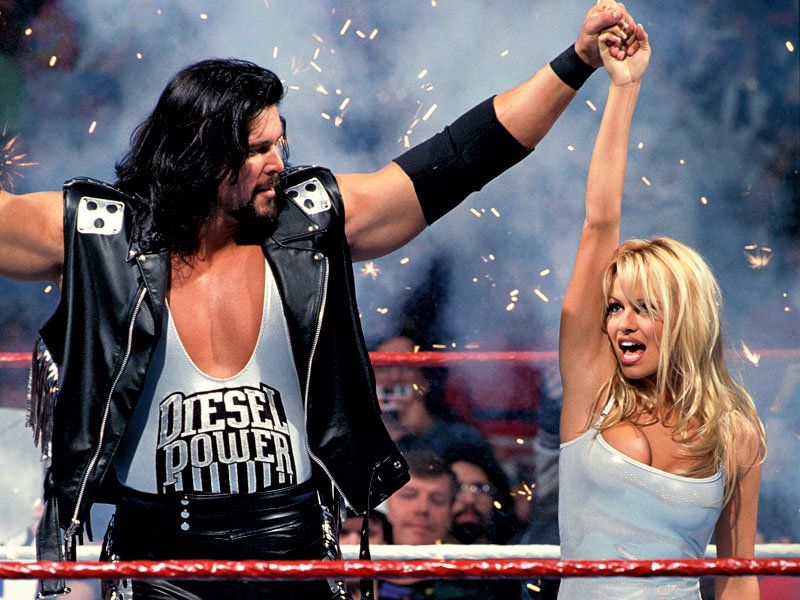 Afterwards they gave us a backstage interview with Bam Bam Bigelow, who hyped the main event and told Taylor he was stepping into his world. I can’t remember anything else he said. At this point of the PPV, I had no idea who he was facing (because I’m English and don’t know American Football players), and confused as to why this match was the main event and not the title match. Also HBK and Sid had another interview.

So yeah, I was rather pessimistic at this point. Celebrity matches never go down well with me, and still had no idea who Bigelow was up against until he was announced on his entrance. I still had no idea who Lawrence Taylor was (and sorry, but English don’t normally watch 90’s American Football), and I was beginning to feel bad for Bigelow.

And then the match began! Oh my, LT blasted out of his corner and WRESTLED a match. I almost fainted for real as LT performed WRESTLING moves like clotheslines, hip tosses and bulldogs. I did not see that coming, and I was beginning to see why this match had been hyped so much.

Bigelow tried to kill his momentum, but LT would counter with some awesome forearms (and he did not hold back at all). Bigelow managed to apply a boston crab, and LT started to SELL his offense. Bigelow managed some kind of moonsault and an enzuigiri. The Flying headbutt (his finishing move) got Bigelow a two-count. LT delivered some mean-looking forearms, including one big flying forearm from the second rope to knock Bigelow out and give LT the pin-fall victory.

A really enjoyable (and shocking) celebrity match which saw a former NFL linebacker go over on one of the most agile wrestlers of all time. I wasn’t sure what to make of it, as I felt really sorry for Bigelow, but also impressed by the match, and WWF would undoubtedly get a ton of media press for it. Team LT celebrated as the show came to an end.

The PPV felt short and lacking in production, quality commentary, and decent matches in the mid-card. Aside from Owen and Yokozuna becoming tag champions, not much else happened. Diesel retained, Jarrett retained, the women were nowhere to be seen, and the celebrities stole the spotlight from the wrestlers. The Undertaker match was nothing special, and Backlund vs Hart was disappointing.

The main event was more exciting than many of the other matches on the card, which is wrong. Wrestlemania XI is billed as one of the worst Wrestlemanias of all time, and I can agree with that statement. It’s also been billed as the Wrestlemania which saved the WWF in their war with WCW, which I can also understand considering the army of celebrities they got on the show.

1995 was just one of those years. At least I know the Wrestlemanias preceding this will begin to creep into the exciting, fun-filled Attitude era. We probably won’t see many quality wrestling matches, but the entertainment will be top-notch. Wrestlemania XI is probably the worst in the series since Wrestlemania II.

I’m looking forward to seeing what Wrestlemania XII has in store for me. I hope you enjoyed the read a little more than I enjoyed the show. Would I recommend this PPV? Only if you are a big fan of Diesel, Pamela Anderson, Jenny McCarthy, and NFL footballers from the early 90’s. Thanks for reading.