Good day to you! For exuberant historians or intrigued wrestling fans looking for something different to read, this one is for you. Today, we are looking at wrestling in mythology, including five of the most known stories from the ancient past.

I’m looking to see if it is worth reviving the Wrestling Origins series, so please let me know if you would like to read more soon. My previous two articles include: How Did Professional Wrestling Begin? — The Gold Dust Trio

Sharing this elsewhere? Please give credit to myself and eWrestingNews.com, thank you.

Gilgamesh is a hero in ancient Mesopotamian mythology dating back to the late 2nd Millennium B.C. (4,000 years ago). Originally, he was a part-human, part-God oppressing his people. They called to the other Gods for a solution, so they sent Enkidu, a “bull-man” who would serve as Gilgamesh’s equal. To help matters, the sun-god Utu (aka Shamash) attempted to humanize Enkidu by luring him away from the wild, and in to sexual relations with a temple prostitute. He would also train as a watchman on a Shepherd’s Camp. While there, Enkidu learns of Gilgamesh’s treatment (he slept with them on their wedding night) of new brides.

This injustice leads Enkidu to a wedding ceremony where he hopes to encounter Gilgamesh. The King approached the wedding chamber, and they crossed for the first time, leading in to a fierce wrestling match. This fight is described in the poem known as the Epic Of Gilgamesh:

We’re dealing with translations from tablets that are thousand’s of years old, but what many interpreted is a fight for dominance. No strikes are mentioned, and the traditional “lock up” is emphasized. The result is confusing, and some have claimed it a draw, while most believe Gilgamesh was victorious. Enkidu accepted defeat and Gilgamesh’s strength, and an eternal respect formed between them.

By humanizing Enkidu, the gods succeeded in making him Gilgamesh’s equal, as he too was humanized through their friendship. They slayed enemies together and Gilgamesh turned from oppressor to hero. The showing of respect between wrestlers as a code of honor may have originated from the earliest mention of wrestling in the bond between Gilgamesh & Enkidu. The sport of wrestling often concludes with mutual respect being shown. The following image was posted by Makuhico on Reddit. 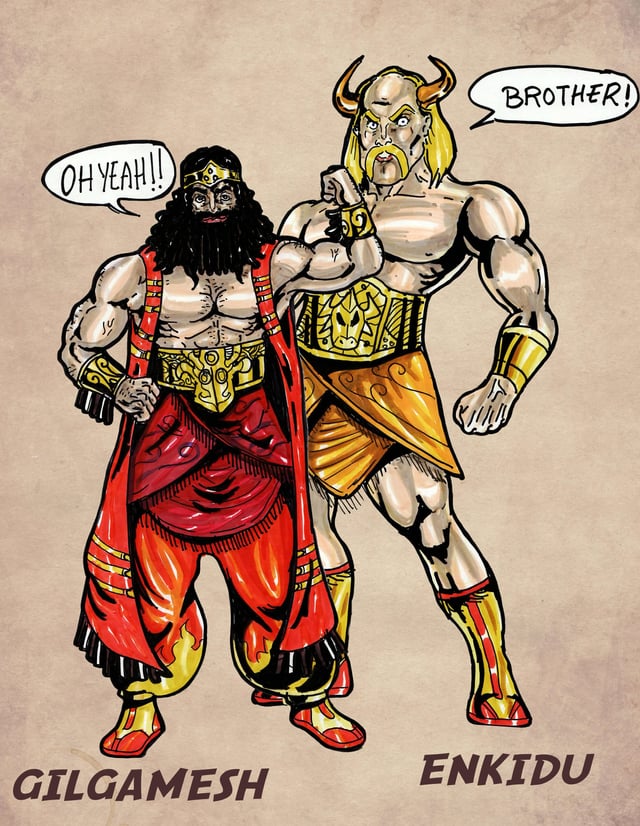 Another wrestling story comes from Greek mythology, where Odysseus and Telamonian Ajax (aka Aias) fought in a wrestling match at the The Funeral Games of Patroclus; an old buddy of Trojan War hero Achilles.

After the boxing, the third contest of the event pitted the strength of Ajax against the cunning of Odysseus (he invented the famous “Trojan Horse”). According to thought.co’s summary of Homer’s Iliad Book XXIII, they fought over a tripod worth 12 oxen, and the loser would get a woman worth 4 oxen. Achilles announced the start of the match by saying: “Rise now, whichever pair of warriors will try their skill”. From another source, it says the injuries they sustained from the “vigorous physical contact, presented thlasis of the soft tissues of the body that resulted in bruising: while many a blood-red weal appeared on their shoulders and ribs.”

From poetryintranslation: When they had both prepared, they entered the ring, and came to grips, clasping each other in their mighty arms, locked together like the sloping rafters that some skilled craftsman sets in place on a tall house, to resist the winds. Their backs creaked under the pressure of their strong hands, and the sweat ran down in streams, while many a blood-red weal appeared on their shoulders and ribs, as they strove for the ornate tripod and the glory.

Odysseus could no more trip Ajax, and floor him, than Ajax could move powerful Odysseus’ firm stance. But when they began to weary the watching Achaeans, Ajax spoke quietly to Odysseus: ‘Zeus-born son of Laertes, Odysseus of the many wiles, you’d best try lift me, or I you, and let Zeus decide the matter.’ So saying, he tried a lift, but Odysseus knew a trick or two. He kicked Ajax hard in the back of his knee, and toppled him backwards, falling on his chest.

The spectators looked on admiringly, as they stood and noble long-enduring Odysseus in turn tried a lift, raising him off the ground a fraction, then failing to lift him further crooking a leg round Ajax’s knee, so they fell side by side, smothered in dust. They sprang up ready for a third round, but Achilles restrained them: ‘No more, don’t wear each other out. You were both victorious, and shall have identical prizes: there are other events now for competition.’ With this, they readily retired, and wiping the dust from their bodies, donned their tunics.

Unlike Gilgamesh and Enkidu, Odysseus & Ajax never became friends, as they later feuded over the deceased Achilles’ great armor. Odysseus was eventually handed it after impressing with his arguments, which sent Ajax in to a fit of rage, such so that he cursed Odysseus.

In response, the goddess Athena turned his anger in to madness, to the point he saw sheep as Odysseus’ comrades. Ajax mercilessly killed the sheep. And when his madness was lifted, he committed suicide out of shame. Even as a shade in the afterlife, he later refused to talk to Odysseus, showing that his grief over failing to defeat him in life, became eternal in death. Jacob Wrestling With The Angel

As described in Genesis, Jacob encounters a man on the way back to Canaan and they wrestle til daybreak.

“The same night he arose and took his two wives, his two female servants, and his eleven children, and crossed the ford of the Jabbok. He took them and sent them across the stream, and everything else that he had. And Jacob was left alone. And a man wrestled with him until the breaking of the day. When the man saw that he did not prevail against Jacob, he touched his hip socket, and Jacob’s hip was put out of joint as he wrestled with him.

Then he said, “Let me go, for the day has broken.” But Jacob said, “I will not let you go unless you bless me.” And he said to him, “What is your name?” And he said, “Jacob.” Then he said, “Your name shall no longer be called Jacob, but Israel, for you have striven with God and with men, and have prevailed.” Then Jacob asked him, “Please tell me your name.”

But he said, “Why is it that you ask my name?” And there he blessed him. So Jacob called the name of the place Peniel, saying, “For I have seen God face to face, and yet my life has been delivered.” The sun rose upon him as he passed Penuel, limping because of his hip. Therefore to this day the people of Israel do not eat the sinew of the thigh that is on the hip socket, because he touched the socket of Jacob’s hip on the sinew of the thigh.”

There are so many interpretations of this story that it would be too much to detail here, but it’s safe to say there are parallels to other encounters and fights in mythology. It is because of this story that it prohibits Jewish followers from eating the meat tendon attached to the hip socket. The next wrestling mythology story comes from the Mahābhārata, which is the longest known epic poem and has been described as “the longest poem ever written”; with roughly 1.8 million words in total. In it contains a wrestling encounter between Bhima and Jarasandha, which is said to have lasted a marathon fourteen days.

Bhima defended Krishna by accepting the challenge of tearing his opponent’s body in half. After doing so, Jarasandha reformed his body and got up again to fight. Krishna split a twig in half and threw it in opposite directions to show Bhima how to win. He followed Krishna’s instructions by splitting Jarasandha in half and throwing them in opposite directions. His opponent could not bring his body back together again and died. Jarasandha had captured 100 kings and was ready to sacrifice them, so by killing him they were free to serve the emperor Yudhishthira.

While splitting someone in half can’t be related to modern wrestling, you could say that having a match for fourteen days is like what we call an Ironman match, only far more extreme. Also, it shows how wrestling is embedded into many religions and cultures across the world in some form. If you know your Norse mythology, you may have heard of “Elli” (meaning Old Age). After losing in a drinking challenge during a trip to the hall of the giant Útgarða-Loki, Thor says:

“Little as ye call me, let any one come up now and wrestle with me; now I am angry.” Then Útgarda-Loki answered, looking about him on the benches, and spake: ‘I see no such man here within, who would not hold it a disgrace to wrestle with thee;’ and yet he said: ‘Let us see first; let the old woman my nurse be called hither, Elli, and let Thor wrestle with her if he will. She has thrown such men as have seemed to me no less strong than Thor.’

Straightway there came into the hall an old woman, stricken in years. Then Útgarda-Loki said that she should grapple with Ása-Thor. There is no need to make a long matter of it: that struggle went in such wise that the harder Thor strove in gripping, the faster she stood; then the old woman attempted a hold, and then Thor became totty on his feet, and their tuggings were very hard. Yet it was not long before Thor fell to his knee, on one foot. Then Útgarda-Loki went up and bade them cease the wrestling, saying that Thor should not need to challenge more men of his body-guard to wrestling.

Later, the giant explains to Thor that while his opponent was more formidable than she appeared, his prowess was still astonishing:

It was also a great marvel concerning the wrestling-match, when thou didst withstand so long; and didst not fall more than on one knee, wrestling with Elli; since none such has ever been and none shall be, if he become so old as to abide “Old Age,” that she shall not cause him to fall.

The moral of the story seems to be that even gods aren’t immune to the power of aging. We could relate this story to two things in wrestling, the first being that all great legends have to retire someday. Another could be that if an old woman can beat somebody as mighty as Thor, why is it we judge a wrestler’s ability on how they look? We have seen in modern times that smaller wrestlers have proven their worth in the ring, but for decades only the biggest and strongest could believably prosper at the top of the mountain. This story tells us not to judge a book by its cover.

Please let me know if you have anymore wrestling mythology stories in the comments. Thanks for reading!