Kevin Owens: “Hard to find words at the moment… Goodbye, Trav… You fought like hell and are an absolute inspiration to me and many others. I only met Kris twice but he made me feel like we’d been friends for years. If I feel this way, I can’t imagine what longtime friends feel. Kris was a great performer and an even better dude. My thoughts are with his family and everyone close to him…Take care of each other, guys.”

Mark Andrews (Mandrews): “Today the world lost an incredibly special person. Thanks for everything, Kris.”

Neville: “Kris was a brilliant performer but more importantly a genuine human being. Goodbye friend.”

X-Pac: “I just learned of our dear friend @RealKrisTravis passing. Love & Respect to you my friend. You’re already missed.”

Samoa Joe: “My heart goes out to all at the passing of Kris Travis. Taken too soon & he fought way too hard. Rest easy Trav. You’re truly a warrior.”

Finn Balor: “Smiling thinking of OUR friend. A sad day, but you will live forever in the hearts of everyone that knew you.”

In 2014 he was diagnosed with stomach cancer. Several wrestlers showed their support for him, as he spent his time raising funds for charities. In 2015, he recovered from the cancer and returned to wrestling.

A few months later, Travis announced that his cancer had returned, and he would be retiring from wrestling again. He married his girlfriend in February before passing away in March.

He was an English-American wrestler. He grew up in the United Kingdom and served in the Merchant Navy in World War II. After the war, in 1946, he relocated to New York City and successfully applied for U.S citizenship.

His wrestling career started during the war in 1940, at the age of 17. After moving to the states, he shared an apartment with Stu Hart. By the 1950s, he was working under a gimmick of a pompous, snooty, villainous British aristocrat, and it stuck for most of his career.

He won several tag team championships, and unsuccessfully challenged Lou Thesz for the NWA World title in Australia on several occasions. By the 1960’s, he had moved to Hawaii and performed in the local territories.

After the death of Japanese legend Rikidōzan, the owner of AJPW Giant Baba asked Blears to scout foreign wrestlers to perform for his promotion. Among these names included Don Leo Jonathan, Dynamite Kid, and Davey Boy Smith.

He stopped wrestling full-time in 1965, and became the head booker for Hawaii Championship Wrestling. He also provided commentary for the AWA, including a high-profile bout for the AWA World title between Nick Bockwinkel and Hulk Hogan.

A man of all trades, Lord Blears had been a swimmer, surfer, mariner, actor, ring announcer, promoter, and wrestler in his lifetime. He did also legally change his name to “Lord Blears”. At the age of 92, he passed away of natural causes in the local medical center.

“Iron” Mike Sharpe was known as one of the most popular enhancement talents in the WWF. He was with the promotion from 1983-1995, and his initial run was good as he was managed by Captain Lou Albano, picked up a winning streak, and challenged Bob Backlund for the WWF World Championship. He lost the match, and never again did he reach the same heights.

Very early this year, Mike Sharpe passed away and no cause of death was given. It is likely there were health complications stemming from a landscaping incident he had which led to an infection in his leg, confining him to a wheelchair for the rest of his life.

Well what can I say about Mr. Fuji? One of the best tag team champions in WWE history with Professor Tanaka, and one of the best managers having led wrestlers & teams like Demolition, The Powers Of Pain, Yokozuna, The Orient Express, Owen Hart, and so many others to victory.

Despite being billed from Japan, Harry Fujiwara was American; he was born in Hawaii. He was one of the longest serving stars in the history of the company, making his debut in 1972, and retiring from the wrestling business in 1996. He was inducted in to the WWE Hall Of Fame in 2007 by Don Muraco. In August, at the age of 82, Harry Fujiwara passed away and no cause of death was given out of respect to the family.

Apologies for the sadness. It is good to look back and remember those who paved the way. The business continues to lose good people each year, and the only thing we can do is remember them, pass on their accomplishments, their sacrifices, and what made them special to the next generation of wrestling fan. Thanks for reading. 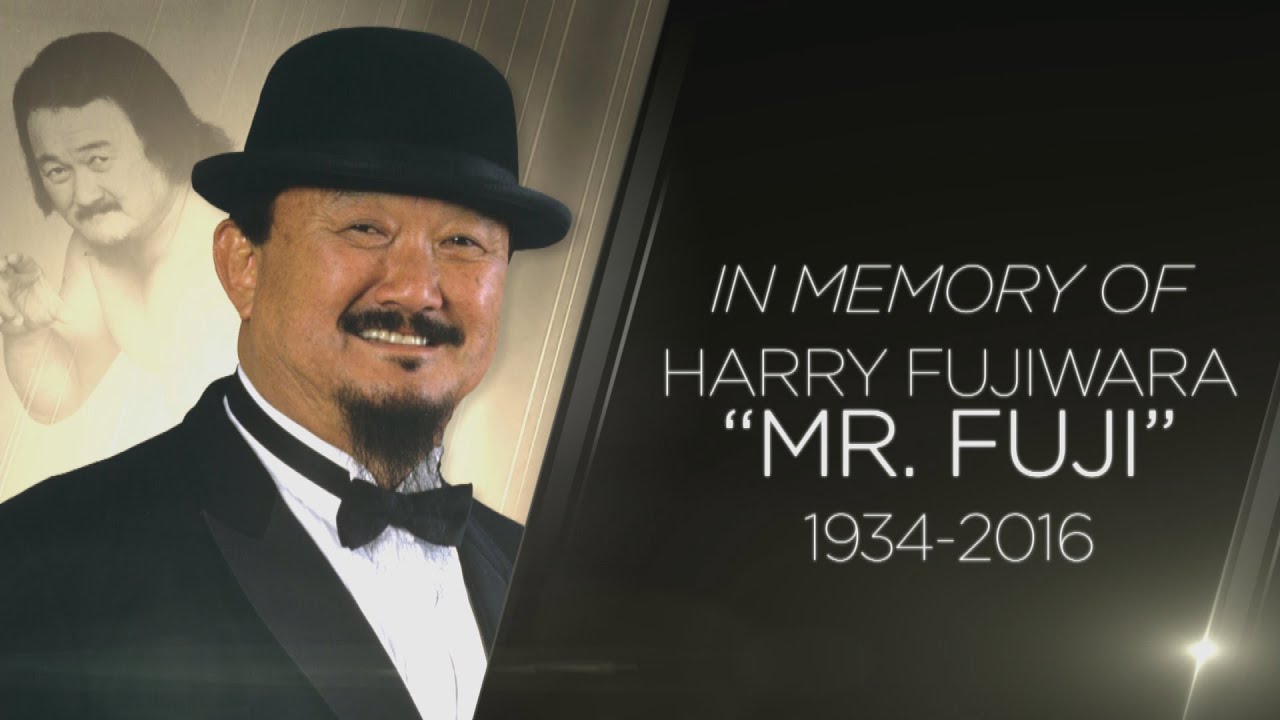