When an unskilled or uncooperative wrestler is unable, or unwilling to work with their opponent to complete a move. When it’s done on purpose, it’s supposed to embarrass their opponent by making them look weak. Sandbagging is considered unprofessional and dangerous, as it takes two to complete a suplex, throw, or powerbomb without botching and causing injury.

When a wrestler is outnumbered in the ring and their stablemates/allies enter the ring to save them from the onslaught. 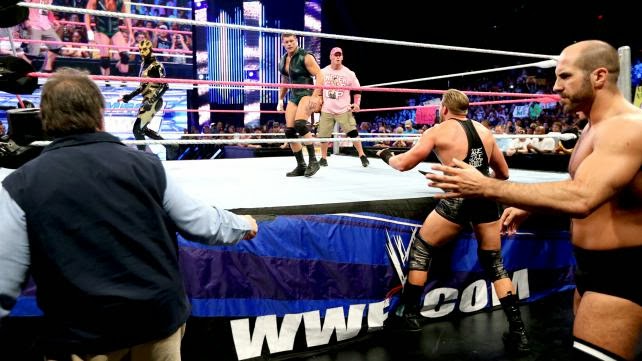 A school teaches students in the art of professional wrestling. This may include starter schools, or development territories (invite-only) who train talent to adapt to their style of wrestling; like the WWE Performance Center and NXT.

Taking “someone to school” may refer to a wrestler with limited wrestling ability being coaxed into working a competitive match by their skilled veteran opponent; the byproduct giving them experience, and possibly a new-found respect from the fans.

A wrestling match which focuses on amateur and Greco-Roman wrestling holds. May include chain-wrestling, submissions, strategy focused on targeting body parts, and extended time working on the mat. Despite the initial focus, the wrestler’s may be good brawlers who can change the pace of the match and leave the scientific wrestling behind after the feeling out stage; to escalate a respectful rivalry into a personal feud. A screwjob is when a wrestler loses a match unfairly due to outside interference or dodgy refereeing. Usually with the face playing the victim, their heel rival (or future rival) may cost them a championship title shot, or a championship title belt. The act gives the face plenty of motive to seek revenge on their rival, so it’s used often to start, or escalate a feud to the next level; and give the heel sufficient heat with the crowd. Also used to show how “kayfabe” management is abusing their power by preferring “their guy” as champion over another, which gives fans more reason to boo the authority figures. 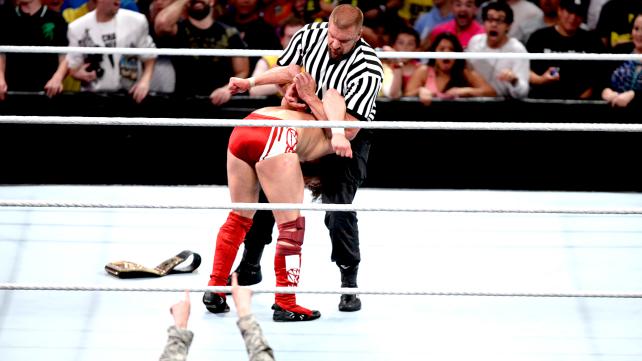 Another term for worked. It’s used by wrestling fans to explain to non-wrestling fans that while outcomes are scripted, it doesn’t mean the moves performed are fake and have no element of risk to the wrestler’s health.

May also refer to wrestler’s promos in WWE. In the past, wrestler’s were given freedom with the mic, and at most would get bullet points of important things to say; but would say it in their own way. WWE (and other companies may do this too) tend to script their wrestler’s promos and only give freedom to a selected few. Sometimes, a wrestler like The Rock will blatantly tell the audience he’s going off-script to address fans or talk about a personal matter, which doesn’t happen often.

The art of selling is a wrestler on the receiving end of a move reacting to it like it seriously hurt. There’s such thing as good selling, and bad selling, which I’ll explain below:

An example of good selling would make you believe the wrestler is injured after a barrage of shots to their shoulder. The wrestler continues the match showing their shoulder pain, which may effect their ability to perform suplex and throws. The match may end with fans questioning whether it was a real injury or not. Good selling can be as simple as staying down after a powerbomb, or appearing “dead” following a vicious spot.

Bad selling is rampant in wrestling today. I could do an article on what I consider the worst era of selling in wrestling history. Too many wrestlers get up early from moves which if they’d been performed 10, 20, 30 years ago, wouldn’t have been the case unless they was being a serious dick to their opponent.

Bad selling isn’t all about getting up early, or no-selling moves. Over-selling is when a wrestler acts like they were hit by a tank from a simple strike. Blatant and continuous over-selling is rare, but the best example is when HBK over-sold Hogan’s moves at Summerslam; to embarrass and poke fun at his character for being “superhuman”.

While promotions like ROH and NJPW feature some of the best talent in the world, there’s been instances of matches with little selling. and sometimes no-selling of finishing moves. While the wrestling is exciting, often I find myself wondering whether these moves hurt at all, because they happen to do many sequences per match without slowing down. The pace is too quick considering the frequency of moves; with more moves per match, there should be more time to sell.

Not used as much these days. “Send it”, is when a wrestler asks their opponent to hit them with the wrong side of the chair.

When desperate wrestling fans will do anything and go anywhere in the hopes of meeting their heroes online or in-person. Nothing their favourite wrestlers do will deter them from being their biggest fan, and the same thing goes for wrestling companies. “WWE sheep” will defend the company no matter what they do, and will go to extreme lengths to blast other companies and their fans. They will hate anyone who has a bad word to say, and will usually respond with anger.

They will talk about wrestling to non-wrestling fans whether they want to hear it or not. They will spend all their money on merchandise, and forget saving money for important things. Not to be confused with normal wrestling fans, or “marks” as others would say.

When a face gets the upper hand early in the match. Often done in matches where the face is clearly going to lose to the monster heel, but the company wants to give them some “shine” by letting them show what they can do before the heel takes the advantage. When a wrestler blatantly goes off-script to address real-life issues and incidents. This may be done when a wrestler is upset with another wrestler in real-life, or they’re frustrated with decisions made by management. It’s considered unprofessional, as the higher-ups don’t want an out of control talent berating other talents or the company in front of the fans. Such drama is discouraged as it gives the company a bad reputation, it shows the company has problems and fans may go elsewhere if they believe the promotion is incapable of delivering quality events and business decisions in the future.

Not to be confused with worked shoot promos like (examples) CM Punk’s pipe bomb, AJ Lee’s promo on the Divas, and Paige’s worked promo on Charlotte. While these promos dip into reality, they were approved by management beforehand so it’s a scripted promo disguised as a shoot. Worked shoot promos give short-term excitement, til the fans get smart and realize it’s a work.