“Mr. TV” was one of the first televised wrestling stars in the UK. He wrestled frequently in the 40-minute time slot before the football results on ITV in the 1960’s and 70’s. His most famous rivalry was an 11-year feud against legendary villain Mick McManus, and at the height of it they drew a record television audience of 22 million.

He was a risk-taker in the ring, but also pushed credibility owing to his cockiness. Fans loved him for his sit-on back breaker and arm lever, aeroplane spin, and his cross-shoulder backbreaker. His status as a star was confirmed in 1964 when he sold out Bishop’s Stortford within three hours. His sole accolade was a short run with the British Heavy Middleweight Champion in 1969.

In 1985 in his autobiography, Pallo came out about the secrets of wrestling and labelled it as “pure showbiz right from the start”. He also had a show business career, appearing in pantomimes with Lionel Blair and Dick Emery. Jackie Pallo was one of the first wrestling celebrities, however, it feels like his name’s been lost in the shuffle as wrestling fans of this generation only care to know legends associated with WWE.

A Yorkshireman like myself. Some of you may recognize him if you’ve seen a certain episode of “Bottom”. He was multi-talented, as he worked as an actor, writer, teacher, and wrestler. Outside of wrestling, he appeared in movies and TV shows such as Kes, Coronation Street, Porridge, An American Werewolf In London, Doctor Who, Alien 3, and many more.

Between 1954 and 1970, he taught English and French to students while working a wrestling career as Leon Arras. Despite not winning any championships, he managed work on World Of Sport, and in cities such as Paris, Munich, Zurich and Barcelona. Despite being untrained as a character actor, his abilities as a wrestler helped him in his first acting job as the comically overbearing sports teacher in the film Kes. Due to his trademark bald head, stocky build, and Yorkshire accent, his roles primarily composed of criminals and tough guys.

Brian Glover is an example of how wrestling can help a talent transition into other genres of entertainment. He was one of the first to truly embrace television and movies after working as a wrestler. While his accolades in wrestling are non-existent, his name lives on, and he should be considered one of the most talented characters to ever grace the business. If you don’t feel like watching the entire episode of Bottom, Glover makes his first appearance at 18:50.

Kwango is another who made a name for himself in the heyday of British Wrestling. Before his wrestling career, he was a ballet dancer in The Ballet Negres, the first all-black dance company in Europe.

He wrestled from the late 40’s to the 80’s, and achieved fame on ITV and across Europe, the Middle-East and Africa. He always played the good guy, and was renowned for his athleticism in the ring, with his dropkicks, springboard crossbodies and his famous headbutt. He also used to put his hand on the opponents head and headbutt his own hand repeatedly to stun his opponent.

He is the first-ever British World Heavyweight Champion. Wasn’t going to include him til I found one of the wrestlers on my list (Scott McGhee) is American. He was a popular longtime mainstay of NWA UK Hammerlock since the mid-1990s. He had a series of strap matches with rival Guy Thunder during the late 1990s and has occasionally teamed with Jake “the Snake” Roberts.

Not much more is known about Gary Steele other than he’s since retired. He made the list because he broke the mold and finally gave Great Britain a World Heavyweight Champion, and since we’ve seen three more in Nigel McGuinness, Magnus, and Drew Galloway. 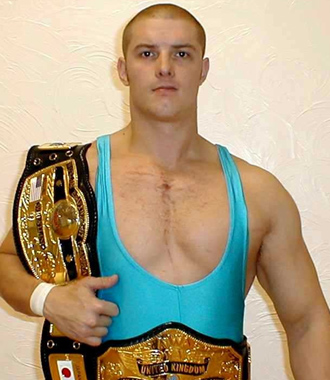 Oh wow, what can I say about Kincaid? He’s one of the most recognized names to come out of the World Of Sport era. You know what’s funny? He doesn’t even have a wiki page. How can this legend not have a wiki page while Gary Steele does? Anyways, I managed to find an amazing article highlighting Kincaid’s career. Yes, I’m going to be lazy and link you to it, because there’s so much to say and I can’t do it justice here. A highly recommended read.

And that’s all from me. Lingomania (S) is next up Thanks for reading. Enjoy a classic main event of Fit Finlay against Johnny Kincaid. The Best Of British, Vol. 10 – We Are The Champions The Best Of British, Vol. 9 – Big Daddy Vs. Giant Haystacks