Aiden who? Exactly. Formerly known as Jay Bradley, or Ryan Braddock in WWE, this big man seems to be known for losing matches despite being fairly capable. It’s got to be bad when TNA can’t find any use for him .. except as a bodyguard for Billy Corgan.

And what happened when Corgan left? They had him lose to .. Mandrews! How does that happen? This is the kind of guy that could rip guys heads off .. yet he’s booked worse than Zack Ryder and Curtis Axel combined. 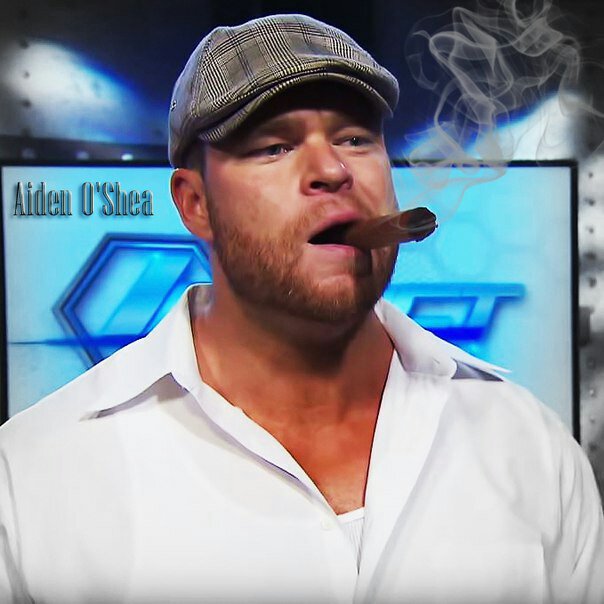 Riley .. Riley … Riley. You had a decent job there.. doing commentary and stuff. He expressed his desire to return to the ring, got himself buffed up like a heavyweight .. and started working in NXT. Spring cleaning came around, and he was fired along with other wrestlers as a cost-cutting measure. Now you can only find him taking sad photos with Fandango.

Can you believe that Crews has been on the main roster since April? Crazy huh? When he was in NXT he was on every show (almost), and even challenged Finn Balor for the NXT title. But then he was “promoted” to the main roster with little hype and no direction. Now he’s good enough to do a backstage skit with The Miz, but that’s about all he gets. His lost opportunity was not being able to make a name for himself in NXT this year.

The former NXT Tag Team Champions have been nowhere. Since Alexa Bliss was promoted to Smackdown they’ve been jobbers and not much else. They tried to reunite the team with little success. It feels like the only reason they had the titles was so Alexa could get airtime. BULL — FIT! Last year he was a solid mid-carder on NXT, and they even went as far to have silly vignettes of Bull getting back in shape after pigging out on junk food in front of William Regal.

He won most of his matches too .. but 2016 came, and it was time to get rid of the dead weight to make way for other, much more well-known stars. Now going under the ring name Bull James, his biggest match was a losing effort to Adam Cole for the ROH World title.

How many times was he meant to debut this year? Far too many. Then he debuted .. and lost very quickly. Not only that, but he had to do this silly Chuck Norris thing which is so dated I wouldn’t be surprised if the idea came from the boss himself. Also he doesn’t know how to say Curt Hawkins right .. in one interview he literally called himself “Kirk Hawkins”. Wish I was joking.

Sigh. We lost a great one this year. Not only did we lose one hell of a wrestler, Daniel Bryan lost what he considers his life. To not wrestle is like .. not being able to do the thing you like the most in the entire world ever again. Pair that with his history of clinical depression, it was always going to be hard to step back for the good of his health. He fought really hard to get back to wrestling again, but the doctors wouldn’t clear him.

You can see it on his face sometimes. That look on his face when you can tell he doesn’t want to be there. He wants to wrestle for the fans, but it’s ok .. we understand. We don’t want him to end up like the many other wrestlers who passed away young.

What happens when you pair Bob Backlund with Darren Young and give them the slogan “Let’s Make Darren Young Great Again!”? Nothing! Absolutely nothing.

Rowan continues to be the least useful, and most injury-prone member of The Wyatt Family. He just .. loses, gets injured, returns, loses, gets injured. All the while Luke Harper does amazing work, Strowman played his part, and Randy Orton adds another element. Is there any further need for Rowan? I just can’t believe life sometimes. Hideo Itami could have been on the main roster by now .. tearing it up and showing us where guys like Daniel Bryan and CM Punk got their inspiration from.

Instead he keeps getting severely injured! By this rate Shinsuke Nakamura will have moved up and we’ll never get to see a confrontation. I just wonder if he’s in the same boat as Daniel Bryan; too many matches over so many years pays its toll on the body.

He spent half of the year with an ankle injury. Upon his return in July, he had some matches .. and disappeared again. Two months later he showed up once more, won a tag match, but was gone again after that. Creative has nothing for you!

Member when she was destined to be one of the most popular women’s wrestlers of recent times? How times change. She’s now on hiatus .. after being given two suspensions for violating the wellness policy, which she and her family publicly disputed. In October she underwent successful neck surgery.

But Paige also went public about her relationship with Alberto Del Rio, all while he was still married. They have both disputed this fact, but it can still be seen as a blow to her reputation.

Wait .. how could he lose when he’s United States Champion and challenging for the title? Well, you have to think about what happened.

He started the year as WWE World Heavyweight Champion, but lost it to Triple H in the Royal Rumble match. He won it back at Wrestlemania, but that’s where the downward spiral began.

At Money In The Bank he was beaten clean by Seth Rollins and lost the title. Two days later, he was suspended for 30 days for breaking the wellness policy, and was instructed to make an address to the roster, and publicly apologize on Twitter. While he was away .. Seth Rollins, the commentary team, and others made negative remarks about his absence.

He returned to the main event scene to challenge for the title, but was unsuccessful. He was demoted to the mid-card and given a program with Rusev over the United States title. He failed to take the title from him at Summerslam when the match was ruled a no-contest. However, he did go on to Clash Of Champions to beat Rusev for the US title.