Originally reported by The Sun, this crazy story is seriously not for the easily nauseous.

A FORMER WWE rookie & Impact Wrestling talent has come up with a real novel way of making extra dosh – by selling photos of her poo. Shotzi Blackheart charges the fetishistic fans five bucks for a picture of her feces. Here’s the advert on her Twitter account. 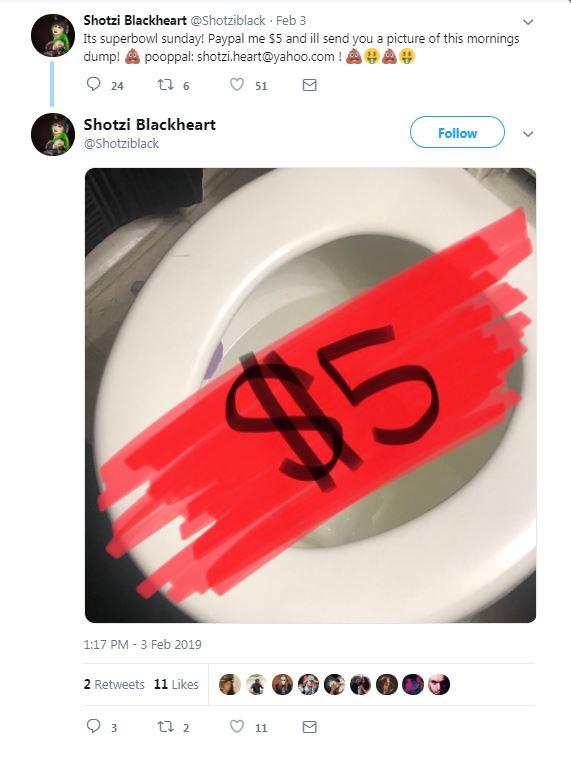 And her stool snaps are selling like hot cakes – with the wrestler showing proof of at least one transaction as she welcomed another member to the “toilet elite”. After paying $5 for a shot of the poop, a mystery purchaser messaged the self-nicknamed “Filthy Filipino” on PayPal saying: “FYI, I am doing this to support you not because I am some weirdo.”

With Blackheart responding: “Whatever bud no judgement here. Welcome to the toilet elite!” The American advertised her unique offering prior at the weekend as she posted a picture of a toilet seat captioned with her contact details and a caption: “Its superbowl Sunday! Paypal me 45 and ill send you a picture of this mornings dump.”

Blackheart, who has also gone under the ring name Pizza Cat, currently works for SHIMMER Women Athletes and RISE Wrestling. The star, real name Ashley Urbanski, is familiar to WWE fans. The Californian-based grappler was a finalist on the company’s Tough Enough show, a reality TV series that saw participants undergo professional training and compete for a WWE contract. Blackheart, who is also a successful alternative model away from the ring, made a guest appearance in the UK two months ago at a Lucha Britannia show in Clapham, London.