Please could anyone who is planning to visit NOAH during the Coronavirus epidemic read NOAH’s guidance on hygiene and infection control before going to shows.

While perhaps not a canonical NOAH show, as it was done as part of the NOAH promotional machine, and for the second year running in what seems to be becoming a yearly tradition, NOAH returned to Club Citta in Kawasaki to bring together wrestling fans and idol music fans, and it was a very fun event.

The card had to be changed as HAYATA was announced to have a rib injury and would be absent until the 24th February in Nagoya, and so YO-HEY teamed with Daisuke Harada. Naomichi Marufuji, also injured, made an appearance before the event began with the club owner\promoter.

Each NOAH wrestler or team made their own entry as they were sung in by an idol group; Tadasuke walked around the ring with the lead singer of his on his shoulders; YO-HEY & Daisuke Harada wore the pinafores of their group, Kongoh stamped to the ring looking cross, Hajime Ohara and Kinya Okada did a dance routine; which Takashi Sugiura did not appreciate and Okada found himself kicked in the ass, thrown out of the ring and then told to “Watch it”…and AXIZ did the “Hysteric Dance” from last year that Marufuji did with Taniguchi and Kiyomiya. In the ring, Kenoh decided to threaten them by waving his fist, and Taniguchi returned it by dancing.

Kongoh were not impressed. Nakajima looked away, and Shiozaki had to stop watching because he was about to explode with laughter.

The closure of the (in)famous “Demon Staircase From Hell” didn’t stop the Yone\Tadasuke women turning out in force to cheer on Mohammed Yone (family member to some, friend of his mother to others) and Tadasuke (who endeared himself to them in 2018 by showing them how tough he was by beating up Minoru Tanaka). They booed both Masao Inoue and Akitoshi Saito for attacking Yone, and STINGER for attacking Tadasuke. 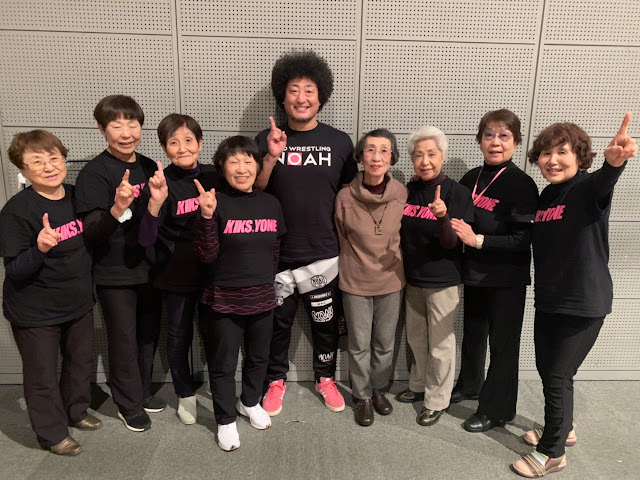 YO-HEY failed to pin Kotaro Suzuki, and while Kotaro Suzuki and Atsushi Kotoge refused to grant YO-HEY & HAYATA  a title match, Yoshinari Ogawa (“unlike those guys”), had something in mind for Harada. If Harada wanted a title shot, then he was going to have to put the IPW Junior Heavyweight on the line against him. Harada later agreed, and it now remains for Yoshinari Ogawa to choose a date.

Kaito Kiyomiya and Takashi Sugiura battered each other with elbows, punches, kicks and slams, but it was Hajime Ohara who lost the match for The Sugiura Army when Kiyomiya made him tap out. Previously, Takashi Sugiura had made a comment that Kiyomiya was too scared to look him in the eyes, so at the end of the match Kiyomiya bent down, looked at Sugiura (who was standing outside the ring), and made the “watching you” motion.

HIGHER GROUND NIGHT 6: SHIMADA SPORTS COMPLEX SUB ARENA , SHIMADA – SATURDAY 22ND FEBRUARY
Kaito Kiyomiya and Takashi Sugiura had their last pre-match before Nagoya on Monday 24th, but it ended with neither getting the win over the other as Kiyomiya made Kinya Okada to tap out to the Stretch Plum Facelock. After the match Sugiura held up the belt, and Kiyomiya (leaning off the ropes on the apron) pointed to it. 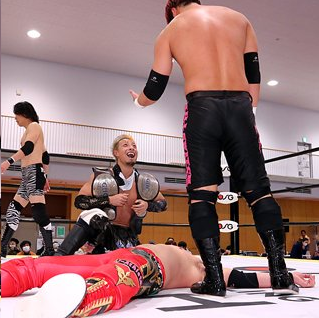 YO-HEY (with a little help from Tadasuke, which no doubt STINGER) will capitalize on, pinned Kotaro Suzuki and then posed with the GHC Junior Tag Belts.

“If I gave up, did not act and forgot about it, then nothing would exist” ~ Katsuhiko Nakajima tells the story behind the AXIZ “GOLD” photobook

Katsuhiko Nakajima wrote in his online PKDX diary about the AXIZ photobook.

He wanted to mark the 15th anniversary in NOAH by doing something special, a produce or a special match didn’t come together for one reason or another; so he came up with an idea of a photobook. The company were at first uncommitted for various reasons, and Nakajima didn’t really want to give up or to push them into anything; as he knew that NOAH had money troubles. He kept on about it the best way he could, but it wasn’t until NOAH’s then President saw the potential and gave it the green light. The story of how the book came together is very touching; and it reveals that past the smirk, past the evil grin and the sarcasm; Nakajima outside the ring comes off as a very gentle person.

(Big thanks to Metal NOAH for sending me the article)

*As NOAH shows are being uploaded to DDT Universe, please consider subscribing. Please do this on the 1st of the month as you will be charged twice otherwise.