With the cancellation of all shows until the 21st March (NOAH have also taken the decision to cancel the 28th March); NOAH had a special treat in store for fans. Not only did they announce that they were releasing new merchandise; and everyone who spent more than 5,000 yen on the store would get a free random autograph with their purchase, they would also be releasing a special themed show from roster members each day, so from 3rd March until the 8th March, we had the following videos per day;

Katsuhiko Nakajima’s video gave us a look at the NOAH dojo and a look into the varied training of a wrestler; and so I highly recommend this video for those who are thinking of training, or who are starting to train. Please do not be put off by the language barrier; what you see will be useful enough…and if you just want to ogle Nakajima, this will definitely be of interest.

Daisuke Harada and Tadasuke bought the Harada Boot Camp to the world, with Harada giving tips and ideas for those who don’t have the time or the money (or the confidence) to go the gym; by introducing exercises you can do at home. Again, it’s pretty self explanatory, so you don’t need to have a knowledge of Japanese.

Shuhei Taniguchi presented a video in which he drank (he drank before it too) and gave advice to people who sent in questions via Twitter. He was joined on the show by his wife (a former wrestler) and young son. Teased by the others in NOAH for being taciturn and known to be somewhat staid; people said they were jokingly puzzled by this, but it went well.

Kongoh’s Fan Meeting was held at Megarage in Kawasaki; and rather than Kenoh screaming at his enemies, it was all smiles and laughter. Yoshiki Inamura spoke about his pets, Kenoh about the formation of Kongoh, Haoh about how he shouldn’t be trusted with the money that was being donated; and it reached RATELS levels of silliness, when they started comparing themselves to potatoes.

The last video of the week was Atsushi Kotoge’s “What A Day” in which he was joined by Naomichi Marufuji; they spoke of hobbies (Kotoge plays the drums, so Marufuji handed Kotoge some pens to play on the table, and Kotoge shyly began to play and then dropped them); answered questions from Twitter and produced a “Correlation chart” with the roster grouped into categories like “No girlfriends”, “Pets”, and “Smokers”. Warning: This video may induce motion sickness as Atsushi Kotoge cannot stay still.

I will be writing more about each video in due course.

The videos had three outcomes; the first being that the next day; Kinya Okada announced he was leaving The Sugiura Army (Sugiura is yet to comment), and was going solo. He didn’t have anything negative to say about his time with the unit, on the whole he was grateful to Sugiura (although Sugiura never let him officially join); but he hadn’t been getting any results and now he wanted to go solo. Okada said that he wanted to learn kicking techniques; and will now be taught them by Nakajima.

The second outcome of the videos, especially the Harada BootCamp; is that fans are suggesting that NOAH look into making a DVD and maybe an accompanying book advising people on how to exercise at home.

The third outcome is that the week of NOAH videos was such a success that fans are asking for more; and indeed it seems that NOAH have hinted that there may well be more.

Junta Miyawaki dislocated his shoulder during training and so will miss some dates when NOAH do eventually return later in the month as the injury requires surgery. Kinya Okada has asked Katsuhiko Nakajima if he can take his place against All Japan on the 27th March. Nakajima granted his wish but said that he had only one job, to win.

Global Tag League will return on April 4th with the opening night being in Osaka; and run for six dates with the final night being on the 18th at Korakuen.
Teams to be announced.

N-1 Victory will return in September 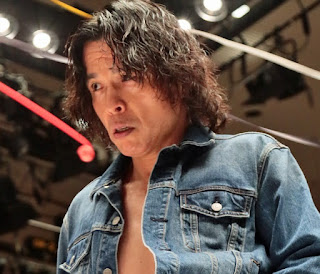 “I want you to stop using “Best In The World” ~ Mini Interview with Yoshinari Ogawa (Part 1)
Yoshinari Ogawa gave an interview regarding Harada’s decision not to put the IPW Junior Heavyweight on the line at Korakuen Hall. Ogawa says he is disappointed in Harada (as well as throwing in some rare expletives about his conduct); for changing his mind, and angry at the company for not consulting him. Ogawa’s plans for having the belt where to go to England and challenge Chris Ridgeway (which I think is NOAH’s plan along the line somewhere whether it be in England or Japan); but as far as Ogawa is concerned Harada wants to keep the belt to pose with it.