At a press conference on the 9th March; Hitoshi Kumano announced that he would be taking indefinite leave from NOAH to undergo treatment on his left eye. Since he has been a trainee he has suffered a nerve palsy which has meant that he had double vision on looking down; but recently the problem has worsened when he looks up and straight ahead (personally, I don’t think the heavyweight matches he has been having lately have helped).

Kumano can no longer ignore the issue, and he is going to get it operated on. He does not think that he will have to stop wrestling; as he has said that the surgeon does not think there will be an issue (it should be said this is tentatively), and he wants to return stronger, with a body like Seiya Morohashi (i.e. ripped), and go to the top of the NOAH juniors.

However, his return is not guaranteed, but Kumano remains hopeful. 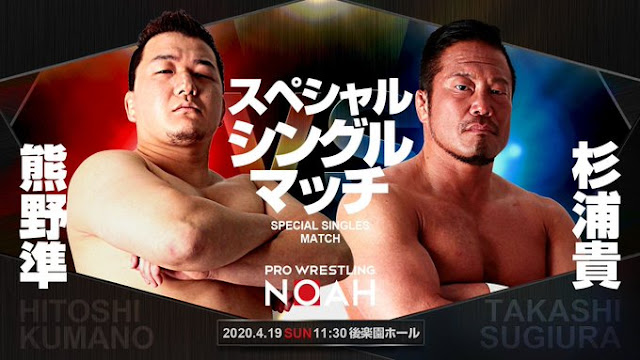 For his last two matches Kumano has special things lined up; in Niigata he will team with Yoshinari Ogawa (Kumano is NOAH born, Ogawa is the oracle, and no one passes through the dojo without his input), Atsushi Kotoge (his opponent who he made his debut against, and who helped train him), and his former tag partner, Hajime Ohara. They will take on RATELS (Daisuke Harada, HAYATA, YO-HEY & Tadasuke).

Kumano’s last match will be a singles match at Korakuen Hall and he will face his hero in a rare card; Takashi Sugiura on the 19th April. The last tag match they met in, Kumano had Sugiura in an Argentina Backbreaker…

With Kazuyuki Fujita absent, Go Shiozaki attended the GHC Heavyweight title match signing alone. He held a short interview and spoke of the coming match; and voiced his disappointment at the event being cancelled due to the Coronavirus at Yokohama.

39 QUESTIONS TO SAKURABA
As a kind of add on to their successful live video week, NOAH held one final one which was a fan Q&A with Kazushi Sakuraba. The highlight of the show was when he tried to call Takashi Sugiura, who was filming an advert for The Leave and so didn’t answer at first, and then Kazuyuki Fujita, who didn’t answer at all. After the event NOAH streamed a portion on Periscope which showed them getting drunk; NOSAWA play fighting with Hideki Suzuki, lots of drinking, lots of food, Sakuraba looking like your drunken dad on a Sunday, and then in the midst of all of this a match was arranged for Yokohama; The Sugiura Army (Kenoh, Kazushi Sakuraba, NOSAWA Rongai, Hajime Ohara & Sekine “Shrek” Hideki) vs Kongoh (Kenoh, Masa Kitamiya, Yoshiki Inamura, Haoh and Nioh).

Hideki Suzuki commented along the lines of; “I was drunk, and it seemed a good idea at the time”.

Takashi Sugiura, however, was not impressed with partying going on while he had to work.

The teams and blocks have been announced for Global Tag League 2020.

Full guide to Global Tag League 2020 can be read here

YO-HEY was the one day manager of Yoneya Tadasuke has been announced as the next one on the 24th April (this will be his second appearance there).
NOSAWA Rongai and Takashi Sugiura held a fan dinner and drink meet and greet at DROPKICK
NOAH released some free phone wallpapers, Kenoh was not amused when he saw was his in a suit and sunglasses, and said the company thought he was stupid.
Katsuhiko Nakajima lost the W-1 Championship to Kaz Hayashi, and couldn’t care less. Despite the fact that he was booed on entry; left the belt outside the ring, and turned up in a hygiene mask which he didn’t take off until the last moment, said that he had fun.
Naomichi Marufuji said the only team he was interested in this year in Global Tag League was Sugiura & Shrek

*Due to shows being cancelled because of the Coronavirus, we now get some pre-matches, which we didn’t have before (i.e. Tanaka vs Sugiura)

As NOAH shows are being uploaded to DDT Universe, please consider subscribing. Please do this on the 1st of the month as you will be charged twice otherwise.

THIS WEEK IN NOAH Go Shiozaki to prove the GHC Heavyweight is the highest peak
“I might destroy it all” ~ Interview with GHC Junior Champion, Yoshinari Ogawa (Part 2)
Sugiura, scouting for challengers at Champions Carnival
RATELS at Megarage