Seven appeared to accept Orange Cassidy’s challenge for his AEW All-Atlantic Championship. In the end, it was Cassidy who came out on top to retain his title.

Seven previously held the NXT UK and NXT Tag Team Championships with Tyler Bate. He was released from WWE after the NXT UK brand went on hiatus. 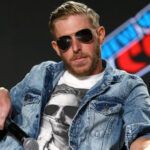