We a hype video for our main event. 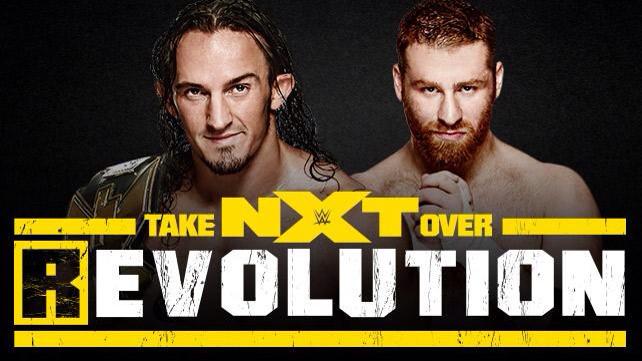 NXT Title Match: Adrian Neville © Vs. Sami Zayn (If Zayn loses then he will leave NXT)

“Let’s go Sami, Neville sucks” chants break out. They lock up, Neville takes him down and works over the left shoulder. Neville shoots off the ropes and Zayn nailed a back breaker. Neville rolls to the floor and Zayn hit a springboard moonsault taking out the champion. Back in the ring, Zayn rolled him up for 2. Neville cuts him off with a drop kick. A nice slow build as we go through this match. with a big time clothesline and then a drop kick. However, Neville in and then out of the ring, he hits a head takeover sending Zayn to the floor. However, Zayn slides back in, throws Neville out, and shoots off the ropes to hit a front flip over the top rope taking out Neville. Back in the ring, Zayn goes to the top rope and hits a for a near fall. picks him up, he goes for a suplex, but blocked. with a back elbow, he shoots off the ropes and hit a spinning for a near fall. Neville with an uppercut, he throws Zayn into the ropes and hit a German suplex for a near fall. Neville goes for a powerbomb, but blocked and Zayn goes for a springboard move, but blocked. Neville a powerbomb for a near fall. Neville with a forearm shot, but this only fires up Zayn. They trade uppercuts, Zayn ducks a kick and hit a clothesline. misses a big boot and eats a side kick. Neville goes to the top rope, he tries for the red arrow, but Zayn put the knees up and locked a neck submission. Neville gets his foot the bottom rope. goes for a belly to belly, but Neville rolls him up for 2. When Neville broke the pin up, Neville’s head and the referee’s head bumped. checks on the referee, Neville with a and a head takeover for a near fall! with a forearm shot, Neville with one of his own. Neville misses a kick and Zayn hit a German suplex. with a second and then he goes for a third…which he gets. goes for a big boot, but Neville rolled to the floor. with a dive through the ring post and hit a DDT on Neville. Back in the ring, Zayn hit a big boot to Neville, which knocked the referee down. Neville falls down to the floor. tries to get the referee awake, Neville grabbed the NXT title and Zayn hit Neville with a big boot. He grabbed the NXT title as the awakes, Zayn is about to hit Neville with it, but can’t. said F*ck that. Neville rolled him up for a near fall. with a belly to belly suplex into the corner and a big boot for the win.

Zayn celebrates in the ring as the locker room come down to the ring to celebrate with him. Kevin Owens gives him a huge hug. Neville faces off with Zayn, Neille kicked Zayn’s hand away and hugged him. He gives Zayn the floor and walks to the back. Now, we fade to black.