The event picked up again with a WWE vs NFL (it was still every man for himself) battle royal with the following participants:

The match is likely to have inspired the current André the Giant Memorial Trophy Battle Royal. It included many beefed up wrestlers/footballers going at it. One of the smallest wrestlers in there was a young Bret Hart, making his Wrestlemania début alongside Jim Neidhart. This was before they started wearing pink and black, they were using blue and black instead.

Some of the highlights for me included Bruno Sammartino looking really lost, as he struggled to find other wrestlers to fight. He could be seen wandering around, trying to do things, but constantly being cut off by other participants. William Perry and Big Jon Studd had a feud going, so the fight between them was pretty sweet. Russ Francis also did very well for the NFL side. The coolest part of the match was a fight between The Hart Foundation and André the Giant to decide the winner. I’ll let you guess who won.

And then the main event for Chicago arrived. Probably the best match on the show with good reason. It was the reigning World Tag Team Champions, The Dream Team (Valentine/Beefcake) vs The British Bulldogs. This was the Wrestlemania début for the British Bulldogs, and the crowd in attendance was firmly behind them.

The match was really good, it could have been better though. I felt The Dream Team lacked chemistry, and lacked a sense of urgency as heel tag team champions. Johnny Valiant was in their corner, but I didn’t notice him much. It was the longest “wrestling” match (the boxing match was slightly longer) on the PPV. It ended in spectacular fashion, as the Bulldogs won their first WWF World Tag Team Championships.

They received the biggest pop of the night on the three count, it was very well received. Dynamite Kid appeared to loiter on the outside, selling the match and his injuries, as Davey Boy Smith got in the ring to comment. Appearing exhausted, he expressed how happy they were to win the tag team championships, because if they didn’t win they were going to travel back to Europe. He told the fans how the British Bulldogs were here to stay in America. Captain Lou Albano and Ozzy Osbourne were interviewed in the ring as well. They were stoked to see The British Bulldogs win the gold. As a fan from England, this was my favourite moment of Wrestlemania II. And now, moving on to the third and last venue. 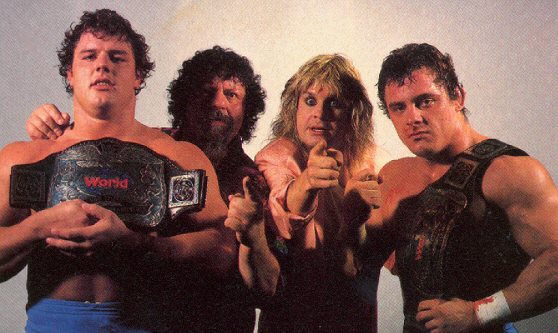 The commentary team changed for the last time to Jesse Ventura, Alfred Hayes, and Elvira. I was surprised by this team, because it was probably the most well-rounded.

The first match was between Ricky “The Dragon” Steamboat, and Hercules Hernandez. I like to think it was the best match in the Los Angeles portion of Wrestlemania II. They worked well together, and there was a lot of hard-hitting action from both, and athleticism from Steamboat. This match would decide the number one contender to Randy Savage’s Intercontinental Heavyweight Championship.

And in a match likely forgotten by many, Adrian Adonis (dressed up as a woman, w/ Jimmy Hart), fought Uncle Elmer. The fans hated Adonis, and Elmer received a decent pop on his entrance. Sadly this match can be regarded as the prime example of how useless Uncle Elmer was in the ring  Adonis was over-selling Elmer’s offense like Dolph Ziggler and HBK combined. Elmer just kinda stood there and bounced off him. Adonis managed to work a three-minute match with Elmer. After the early domination by Elmer, and all the over-selling by Adonis, guess who won the match?? Adrian Adonis. The man with long blond hair, make-up, and a pretty pink dress. The match should come with a health hazard warning. This is a low point in Wrestlemania history. I guess they did this deliberately to make the Hogan vs Bundy main event look good..

Wrestlemania II redeemed itself a little by having The Funk Brothers (Terry & Hoss) vs Junkyard Dog and Tito Santana. JYD was over with the fans just like the year before. The match caught me off-guard a bit, as I didn’t expect to see these two teams. It was a pretty average match, clearly better than the previous, but not better than Steamboat vs Hercules. Terry Funk was everywhere, clearly carrying the match and keeping it somewhat entertaining. JYD played to the crowd a bit, and the other two were just kinda there.

The main event of Wrestlemania II was a steel cage match between the WWF Champion Hulk Hogan, and King Kong Bundy. I tried to get invested in the hype and promos, but I found I couldn’t care for it. It was obvious who was going to win, and Bundy, despite his size, didn’t come across like he was ever going to beat Hulkamania. There were some laughs to be had over Bundy’s promo when he claimed “Bundymania” was taking over. I made the comparison on his promo to one of the Big Show’s. They seem to have a similar way of conducting interviews, even down to the facial expressions.

It was like seeing a cage match between John Cena and The Big Show. Bundy had his moments, but Hogan would inevitably make comebacks. Hogan stopped Bundy from escaping out of the door on multiple occasions. We saw Hogan “hulking up” at one point as well. The match ended as Hogan delivered a big boot, climbed the cage, and escaped. Bundy crawled towards the door, but somehow managed to escape well after Hogan had dropped to the floor. Can’t be sure if Bundy messed it up, or Hogan. The champion celebrated, and the fans loved it. Hulkamania was growing. I felt the show was weaker to Wrestlemania I, but it managed to deliver something good at each venue. The WM debuts of Randy Savage, Jake Roberts, The Hart Foundation and The British Bulldogs were definite highlights. The low points included the first match, George Wells vomiting, the Women’s Championship match, and Uncle Elmer vs Adrian Adonis. Also the extortionate amount of celebrities mentioned took a lot of time away from the matches.

Having three separate venues with changing personnel made it feel like a three-part show. Vince and Susan on commentary was laughable. Monsoon carried the second show by himself. Ventura/Hayes/Elvira had the best chemistry. The Chicago card was the best, followed by New York. I enjoyed The New York card better than Los Angeles because of Savage, Roberts, and the Piper/Mr. T fight. The LA card started well, but the other three matches hurt the ending. Overall it was an average event. It was too easy to lose interest, as all three cards had weak moments. Unlike Wrestlemania I, Wrestlemania II was a rollercoaster. You have to be brave to take this one on. Prepare yourself for many celebrity announcements, talking, and short matches. This event may make you appreciate the current WWE product more. They did use the upcoming talent well though (Savage, Roberts, Bulldogs, Harts). This was a breakthrough for many future WWE Hall Of Famers.