As suggested to me not long after finishing the Wrestlemania series a couple of years ago, I’ve finally decided to give this Royal Rumble thing a try. I’ll be going through every Rumble match, and I’ll share my thoughts on the good, and the bad, without going in to too much detail (as they are meant to urge you to watch them yourselves). It may take several months to complete, yet I think it will be worth it in the end.

Creation: Pat Patterson is credited with the creation of the Royal Rumble concept, and the same rules apply thirty years on. While the 1st official Rumble took place in January 1988, there was an experimental Rumble which occurred on October 4th, 1987 in St. Louis, Missouri. One Man Gang won the match by last eliminating Junkyard Dog in a controversial finish.

There have been other Rumble matches which have taken place on non-televised events and on episodes of Raw & Smackdown. Todd Phillips explains it well in the video below. And the source of information for the “Original Rumble” can be found here: https://camelclutchblog.com/the-forgotten-first-wwe-royal-rumble/

With an attendance of roughly 18,000, the first Royal Rumble event was not a PPV; it was a special episode which aired on the USA Network. The card included four matches, with The Islanders defeating The Young Stallions in the main event. The Rumble match was on before that, and lasted for 33 minutes with only 20 competitors. The show set a record (for the time), as it became the highest rated wrestling show on cable TV with an 8.2 rating. I cannot find any evidence that the winner of the Rumble went on to challenge for the WWF title at any time. Vince McMahon and Jesse Ventura are your commentators for this match.

**Warning! SPOILERS are posted below the video! Fast forward to the 19-minute mark for the Rumble match**

A lot better than I was expecting, mostly due to the excitable crowd. Bret Hart and Tito Santana started out, and the fans were super hot for “Chico”. Butch Reed got in there and made it difficult. Neidhart followed, which made it even worse for Santana. They were about to eliminate him, til Jake “The Snake” bombed down to the ring and eliminated Reed. “The King” Harley Race entered next, to a groan from the audience. Occasionally they would burst in to loud “DDT” chants; which was pretty cool.  The ring began filling up with names like Danny Davis, Sam Houston, and Boris Zhukov. Ventura said to McMahon “I like this Royal Rumble concept, it’s really interesting”.

Can’t remember it ever happening before, but both “The Rock” Don Muraco and Nikolai Volkoff came down to the ring at the same time. Volkoff tried taking his spot, but Muraco punched him and the referees held Volkoff back. It was suggested that Volkoff “didn’t know English very well”, but he could also have tried to get in early to help Zhukov. Unluckily for Volkoff, his tag team partner was eliminated as he waited for his time to enter. Amid the chaos, The Hart Foundation finally managed to eliminate Santana, which did not please the fans. Surprisingly Harley Race was eliminated! And he refused to leave, he wanted to get revenge on Muraco. As referees held him back, Jim Duggan came out to very loud HOOOOO! chants. He attacked Harley, and ran after him with the 2×4. The crowd were going crazy. They were happy to see both members of The Killer Bees tag team as well.

With the ring filling up, Hillbilly Jim and Dino Bravo joined the fray. Ventura kept reminding McMahon how well Bret Hart was doing, considering he’d been in there from the beginning. The Ultimate Warrior! He rushed to the ring, but didn’t quite have the fan support of a Tito Santana or a Jake Roberts (yet). Muraco eliminated Bret Hart at this time, and Ventura noted his impressive performance. One Man Gang entered to a sea of jeers, and everyone knew business was about to pick up.

As they got tired, eliminations came thick and fast. Bravo & OMG formed an alliance, which was so effective it came down to them and Duggan; and the fans were out of their seats for him. Jim used his intelligence (lol .. did I just write that) to sidestep OMG, who accidentally (I’m 99% positive it was on purpose) eliminated Bravo. This left the fresher Gang against Duggan, and for the very first time in history .. Duggan did the “pull the rope down as your opponent runs at you” trick. He invented it (don’t quote me on that! I’m assuming), and to this day it remains the most proudest moment of his career. The crowd were really happy, and very loud.

And if you’ve never seen this match, you should .. just to soak in the atmosphere. This is what sparked the Royal Rumble PPV the following year, and 30 years on we’re reliving this classic moment of wrestling history. I wasn’t even 1-year-old when this match took place .. and I’m glad I finally found the time to give it a watch. Oh! And thanks for reading! HOOOOOOOO!

PS: I did a Wrestlemania series from 2015-2016 which was broken (the media only) after the site updated. Due to this new series, I’ll be going back and cleaning them up so I can link you to the Wrestlemania of the same year of each corresponding article. As this is 1988, I shall link you to Wrestlemania IV: https://www.ewrestlingnews.com/articles/wrestlemania-i-xxx-series-4-30 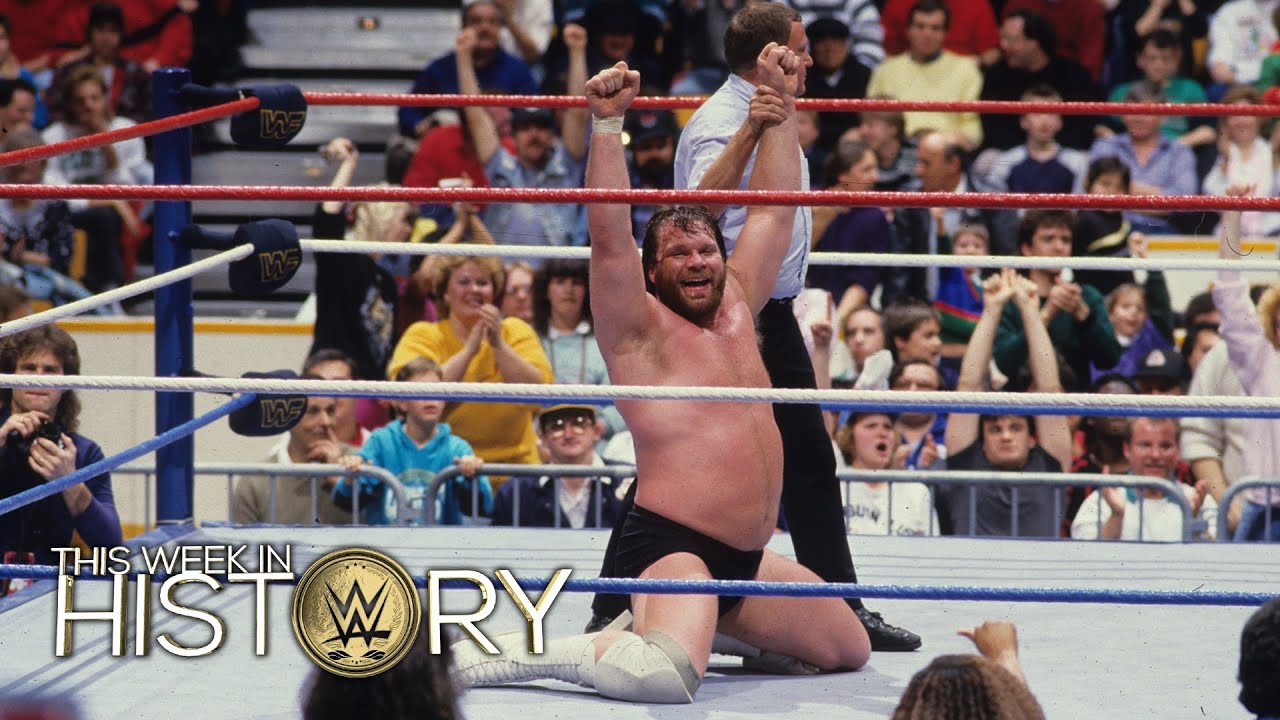