Home Articles What Do the New Roles of Paul Heyman & Eric Bischoff Mean... Not much point in sharing the news here, as I’m sure you can find our reports with the details. Running straight to the point, let’s discuss the new roles appointed to Paul Heyman & Eric Bischoff.

Remembering 15+ years ago, the trio of former rivals Vince McMahon, Eric Bischoff and Paul Heyman made an exciting combination on-and-off television. Bischoff used his “Controversy Creates Cash” technique to keep viewers guessing what would happen on Raw. Meanwhile, Heyman gave us a competitive wrestling environment with healthy tag team action on Smackdown. In this time period, many fans agreed that Smackdown was superior, as the teams of Los Guerreros, Edge & Rey Mysterio, and Kurt Angle & Chris Benoit made tag team wrestling a major selling point for the blue brand.

Taken from wiki: Heyman was the lead writer for SmackDown! from July 2002 to February 2003. On Heyman’s 2014 WWE documentary “Ladies and Gentleman, My Name is Paul Heyman”, Heyman stated that the SmackDown! brand he was writing was beating Raw in ratings, merchandise and live show attendance during a time McMahon wanted real-life competition between the Raw and SmackDown! brands. 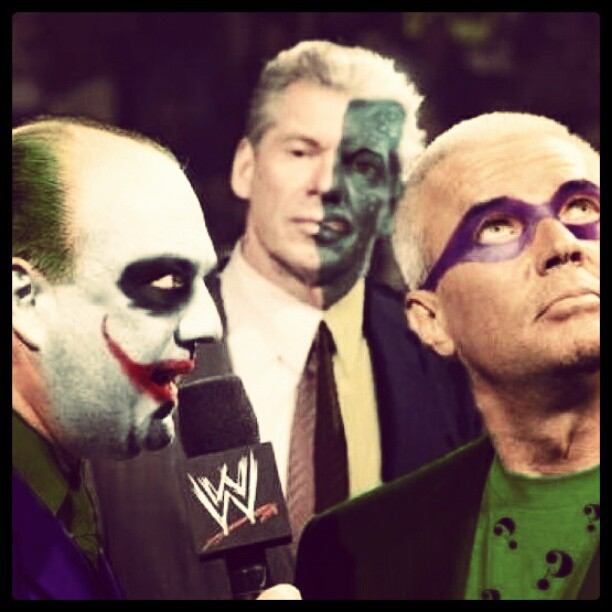 The one thing fans have taken from the news is this line: “reporting directly to WWE Chairman & CEO Vince McMahon.”

Some may be asking “Nothing changes then, because they are still having to answer to Vince .. who will turn everything down surely?”. While that’d make sense directed at an average creative writer with no reputation, I do not feel this is the case for Heyman & Bischoff in 2019. Why? Because none of them are the same people they were decades ago.

The biggest reason why McMahon and Heyman used to butt heads was because they had entirely different philosophies. Heyman wanted competitive wrestling, while McMahon wanted a family-friendly sports-entertainment show. Off the heels from running ECW, Paul didn’t have the patience to deal with Vince’s stubborn ways.

So while the Heyman of 2002 was a mad scientist with a vision which would’ve kept Smackdown hot for years, the dynamic between him and Vince was too volatile. Fast forward to 2019, and that volatility no longer exists. Heyman’s been around in WWE a long time as a talent and creative consultant. He’s admitted to helping talent, although he’ll never admit who he’s helped as he doesn’t want the credit. He recently sent out feelers, stating he would run Smackdown Live if the job was offered. This shows Heyman has mellowed with age, and is able to work with Vince in a way which won’t devolve in to heated arguments. He knows how to sell in a way which doesn’t rile the chairman.

What is more surprising (than his appointment) is the fact they gave him 3 hours of Raw each week. Heyman has never run a 3-hour show, only 1-2 hours. He may need time to adapt to this, and there’s bound to be some bumps in the beginning. Also, the reluctance from Vince to try new things could be an obstacle in the road, but I have faith in Heyman convincing him that his plans will work. What will be interesting to see, is how he paces the show and which talents get regular airtime.

As for Eric Bischoff, he’s someone who will always get a mixed reaction for various reasons. Creatively, he’s more about creating controversy for the sake of controversy. It doesn’t always make sense, and it could be detrimental to Smackdown. However, the trend I have noticed is that while fans do like the show, many others choose not to watch it at all. This is because nothing significant happens on it nowadays, anything major only happens on the flagship show.

The move to FOX is promising because they want an edgier product with more of a “sports feel”. In other words, they want more wrestling like it used to be back in the day. Who better to provide that than Bischoff? Who really was doing nothing with his time, other than chatting about wrestling topics on podcasts. He’s got a purpose again, and it will be interesting to see what changes he brings to the blue brand.

Unlike Heyman though, I think Bischoff and McMahon are more likely to clash. Eric spent years in WWE after WCW closed, only to leave and side with TNA. And what happened to them? Well .. any former TNA fans will tell you Bischoff & Hogan destroyed everything that made TNA appealing. They ripped everything away and tried to compete, despite the company not being ready to do so. He spent tons of money on signings TNA didn’t need, got rid of the 6-sided ring and the X-Division, and transformed TNA in to WCW lite. Could the same happen to Smackdown Live, if Vince lets Bischoff get away with too much? Or are they going to butt heads every week to the point the frustrations end up harming Smackdown? The advantage of hiring Bischoff is he’s used to dealing with network executives. This is likely why WWE decided he should man Smackdown as they head towards their new FOX deal in October. I hope it creates brand split competition again, much like it was back in the early days of the brand extension. What is most important though, is that Heyman & Bischoff are allowed to be creative without having every suggestion shot down in flames, or re-wrote at the last minute to suit. They are not “Yes Men” like Road Dogg or Michael Hayes. Neither men NEED this job. They were asked to do so because WWE is desperate to get the main roster back on track. Vince will be required to step back and let them get on with it sometimes .. otherwise, this decision was for nothing.

Here’s to hoping we get a better main roster in future, with two wrestling minds who have all the motivation to get us back to watching quality episodes of Raw & Smackdown. Only time will tell if this happens, and it’s very telling how badly WWE wants to change things. What are your thoughts? Do you think Vince will give them the freedom? Or are you gonna’ give them a few months notice til they quit due to frustration? Please let us know in the comments below. What you would like to see changed by the new creative team? Thanks guys, see you later!