Due to the Coronavirus outbreak; NOAH have cancelled their next two upcoming shows (and fan events) on the 8th March (Yokohama) and the 15th. NOAH are looking at returning to business on March 21st; although they have warned that they are reviewing the situation and further events may be cancelled. Go Shiozaki said that this is a time for compassion, not anger.
As far as outside participation goes, at the time of writing W-1 are yet to confirm whether or not they will be holding their show in Ota; Takashi Sugiura looks set to be competing for Real Japan on the 19th March, and Big Japan as far as I know have not cancelled “Strong Climb”. NOSAWA Rongai though has had to cancel his “Tokyo Love” produce; in which Takashi Sugiura and Naomichi Marufuji were to appear. Dragon Gate seem to be going ahead with their show on Thursday 5th, where Marufuji and Mochizuki will defend the GHC Heavyweight tag titles.

Kinya Okada and Junta Miyawaki put on a slightly clumsy opening match, in which Miyawaki got a singles win. However, it was a win over a rookie, and not a senior.

Yoshiki Inamura used his size and weight (if not his experience) when he faced Katsuhiko Nakajima in a rare singles match. The match, while dominated by Nakajima, did demonstrate Inamura’s awesome future potential as a powerhouse.

Naomichi Marufuji made his return from knee surgery, tagging with Masaaki Mochizuki & Minoru Tanaka vs The Sugiura Army (Kazushi Sakuraba, Hajime Ohara & NOSAWA). He squared up to Sakuraba the moment he got in the ring which later on in the match culminated in Sakuraba complaining about Marufuji chopping him, and then even lifting up his shirt to show the fans at ringside the marks. The match itself was not a particularly serious one with Marufuji & NOSAWA comedy, and one of those long headlocks where everyone in the ring joins in until being knocked down. It was Mochizuki who got the win over Hajime Ohara, who later told Marufuji that since he won today, it is his turn to win their tag title match with the Shiranui.

Akitoshi Saito celebrated his 30th anniversary in wrestling by teaming with Shiro Koshinaka, Masashi Aoyagi & Masao Inoue vs Kongoh (Kenoh, Masa Kitamiya, Haoh and Nioh). He said he chose them as opponents as when he himself was younger, he too was in a rebellious group and he identifies with them.

A special guest was also at ringside for the match, The Great Kabuki, who had been part of Heisei Ishingun with Saito and the others. Although Kabuki looked very frail, he could still do his nunchuck entry as well as ever. He didn’t get involved in the match though, but he did throw a punch at ringside at Nioh; and then helped his team get the win (again at Nioh’s expense) when he blew poison mist at him.

RATELS scored a triple victory over STINGER (although Daisuke Harada was the legal man) when HAYATA (looking better, but still somewhat sore after rib injury) got the headache on Kotaro; YO-HEY with the Facial G on Kotoge and Harada pinned Ogawa via Katayama German Suplex. This time there could be no STINGER complaining or changing the rules; the three of them had won fair and square. After the match Harada said he accepted Ogawa’s terms for belt vs belt (GHC Junior vs IPW Junior); and YO-HEY made a slightly sarcastic belt challenge. STINGER (as had been said) could hardly refuse; and the matches were set for the 8th March in Yokohama.

Backstage it was Daisuke Harada who changed things, saying that he wasn’t going to put the IPW Championship up against Ogawa. Ogawa insisted that the match would be belt for belt.

Kazuyuki and Go Shiozaki faced off in their final pre-match before the now cancelled Yokohama event; but failed to get the pin on each other. It was a brutal match, which left Shiozaki looking dazed. The match was lost by Shuhei Taniguchi, who tapped out to Hideki Suzuki who was using a technique that stretched his injured ribs. Furious at being cheated out of the win, Shiozaki got in the ring and lariated both Fujita and Suzuki; before taking the mic, holding the belt up over Fujita and saying that he would defend the belt, and (in English), “I am NOAH!”.

Kaito Kiyomiya (so excited he almost fell out of the curtains when he came out); offered a handshake which was accepted by Takashi Sugiura; before the GHC National Championship match got underway. The match was very much done at Sugiura’s pace with the crowd swinging between cheering for Kiyomiya and cheering for Sugiura. In the closing stages of the match, Kiyomiya found a way to reverse the dreaded front neck lock; however, after a match of last moment heart in mouth kick outs, it was Takashi Sugiura who walked away with the title. He has been challenged by Minoru Tanaka; and the title match was due to take place on 8th March in Yokohama. Tanaka said he was challenging as he had heard the belt was openweight. Sugiura was surprised as his last two challengers had been heavyweights, but as this would be something different, why not?

On commentary Naomichi Marufuji said he was not surprised, after all, they did call Minoru Tanaka “the belt collector”.

“Otaku History”
Hajime Ohara appeared at MEGARAGE in Kawasaki on the 26th February; and touched briefly on NOAH’s annual summer Kawasaki event (which he is involved in the planning of); but spent most of the rest of the time talking about his love of computer games, anime and manga. Ohara described himself as being “physically weak” as a young child and he spent a lot of time in hospital where his greatest friend became his GameBoy; and whether it was on the Gameboy, PS2, Sega MegaDrive, Nintendo or any other console; Ohara loved computer games and you name it, chances are he probably played it. 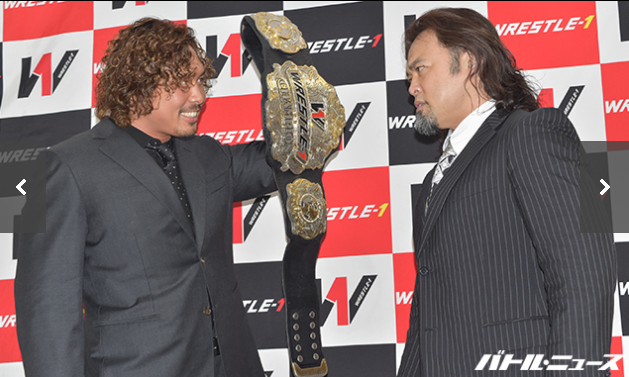 Katsuhiko Nakajima (true to form) expressed no form of surprise or remorse when told about W-1 shutting down (money problems) by grinning and saying; “What are you talking about?”.

Kaz Hayashi has been sidelined with a rupture of biceps femoris muscle; but is still determined to compete in the match; something which Nakajima said was stupid and he asked how Hayashi thought he was going to beat him in that condition? Nakajima also asked if there was anyone else in W-1 who could face him? There apparently wasn’t; and Nakajima said he was looking forward to the “perfect champion vs challenger”.
Hayashi’s response was to call him “rude” and say that he was looking forward to the match, which he was determined to be in 100% condition for.