Home Articles Sheamus : Where Did It All Go Wrong??

At any other time in pro wrestling history, a man who was a former 2 Time WWE World Heavyweight Champion, a World Champion, a Royal Rumble Winner, King Of The Ring, and a Money in the Bank winner would be hailed as one of the era’s biggest stars, or perhaps an all-time great. But in the case of Sheamus, this isn’t close to the case. Making his main roster debut in the middle of 2009, Sheamus entered a WWE scene which was desperate to create a new star. When he won a breakthrough Battle Royal to earn a shot at John Cena’s WWE Championship 5 months into his career, he was perhaps too fresh of a face to have a chance at long term superstardom. His fluky table match win ensured he would not be given everything right off the bat.

While Sheamus was a fine heel, he took his lumps along the way. Following a Wrestlemania 26 loss to Triple H at the end of The Game’s full time run, he was able to put him out for months, but even that didn’t truly make up for things. He was given another run with the WWE Championship in 2010, that seemed like it was giving the championship a place to reside away from the Nexus feud. After losing his championship to Randy Orton, Sheamus won a resurrected King of The Ring tournament, and donned some awful attire in the process. After bottoming out as a heel, Sheamus turned face in mid-2011 by simply telling Mark Henry “I’ll Fight Cha” and literally beat everyone he faced on television after his countout loss at Summerslam.

Over this time, Sheamus became one of the most overexposed wrestlers in WWE, as he was moving through the final days of the brand split era wrestling on RAW and SMACKDOWN weekly. With his Royal Rumble win, and match with Daniel Bryan set for Wrestlemania 28, Sheamus looked to recapture fans imagination in what could possibly be a classic match. 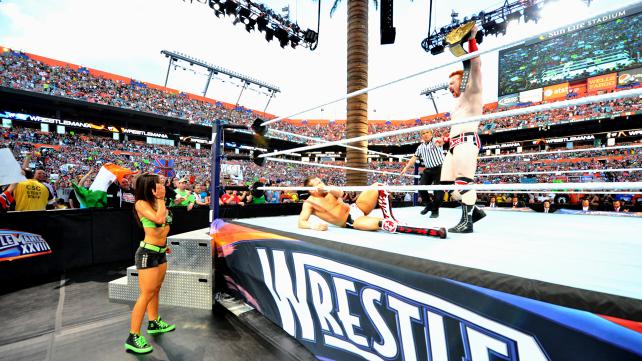 Never Has a Squash Match worked out so wrong for the winner.

After defeating Daniel Bryan in 18 seconds, Sheamus and Daniel Bryan switched destinies in WWE. Bryan became a hero to fans who felt he was wronged by the WWE, while Sheamus began experiencing an undercurrent of backlash that crested throughout his title reign. Following Wrestlemania 28, Bryan and Sheamus had the match they were expected to have at Extreme Rules, and it redeemed Sheamus in some people’s eyes. From here Sheamus would find an eternal rival whom he would battle for the World Heavyweight Championship…Alberto Del Rio. Except these guys wrestled literally 382759201 times with Sheamus winning every single match. As a result Del Rio never felt like an actual threat, when he should have defeated him at least once. Ironically, Sheamus would turn in his best performance on the night he lost the championship at Hell in a Cell against The Big Show. After losing the subsequent rematches, he left the WHC title scene, getting lost when Wrestlemania 29 came around and having to team with Orton and The Big Show against The Shield in a 6 Man Tag. Then it happened…

Randy Orton vs Sheamus, The Night After Wrestlemania

Two directionless faces were fed to a rabid crowd in a nothing match, and got made a joke of. The crowd did the wave and chanted for everything else in and out of the building except these guys, and when they did it was “BORING” and “END THIS MATCH.” It got to the point where Big Show knocking out both men was met with THANK YOU BIG SHOW chants.

After this night, Sheamus never quite regained his mojo as a face. After suffering a serious injury at Money In The Bank 2013, he returned to be in the final 3 of the disastrous 2014 Royal Rumble, thus furthering fan resentment of him. Around this time, he was subject of rumors which would later come to be valid, when he was said to be facing Daniel Bryan at Wrestlemania 30, which would have been an awful use of Bryan, and gave Sheamus backlash that he didn’t deserve. After another run with the United States Championship where he did his best to bring value to the title, he dropped it to Rusev before being written off due to another injury before Survivor Series 2014.

The “You Look Stupid” Era Begins…

After The Royal Rumble, vignettes for Sheamus began airing which were highly intense, and didn’t look to be those of a returning babyface. With no role for him at this year’s Mania, after once again being linked to Daniel Bryan in dirtsheets, he made his return as a heel the night after Wrestlemania 31, by attacking Dolph Ziggler and the previously mentioned Bryan. Complete with a new mohawk and braided beard, WWE clearly got the message that babyface Sheamus died as a character in early 2013. Somehow they mistook the “You Look Stupid” chants for actual heel heat, and shoehorned him into winning the 2015 Money In The Bank briefcase, which was met with a collective, “ARE YOU F***ING SERIOUS?”

Since Sheamus won the briefcase, he’s wrestled Randy Orton a ton, because WWE, and hovered around carrying a briefcase that holds none of the energy Seth Rollins possessed a year earlier. This is a company that had to be dragged by their legs into giving Daniel Bryan the championship, but they are prepared to give the title to a guy who peaked 3 years ago as a championship performer? It’s just odd because Sheamus is one of the best wrestlers ever at his size, but a number of mistakes have sidetracked his overall impact. Whether it was winning the WWE Championship too early, not losing enough, or squashing what would become one of WWE’s most beloved stars ever, and carrying that burden throughout that subseqeuent title reign. This heel turn was supposed to rebirth Sheamus, but once again they’ve gone too fast with him, and sapped any excitement about his climb back to the top.

How can they fix it?

Sheamus can be counted on to bring a high level of performance inside the ring. Instead of Kiss Me Arse gimmick matches, and letting him lose to Randy Orton 4 out of 5 times, turn him into a killer that denounces his previous history, and failures in WWE. Let his look be part of his heat, not the complete source.

All in all, Sheamus will have to try to weather the storm WWE has once again created for him, and attempt to rise to the occasion. WWE has to help him out more if they don’t want to be left wondering where it all went wrong.