Home Articles The Hardys 8-Year Journey Back To WWE. Pt. 2 – The Broken... Hello! Welcome back to a mini-series highlighting Matt & Jeff Hardy’s journey back to the WWE. This week, I’ll be going in to explicit detail on Matt Hardy’s creation of The Broken Universe. Missed the first part? I suggest you go through it before reading this as it explains the low times they had after leaving WWE in 2009. Link here >>> Part 1.

In 2015, Matt & Jeff Hardy worked in TNA Impact Wrestling. Jeff was sidelined after breaking his leg in a dirt bike accident, while Matt recovered from dark times by showing interest in challenging for the TNA World Heavyweight Championship. He had to prove himself, but eventually he was slotted in to the main event of Bound For Glory against Drew Galloway and undefeated champion Ethan Carter III. With the help of his brother Jeff (who was guest referee), Matt won the match and became the third man (after RVD & Lashley) to hold the ECW & TNA titles in the same career. His wife Reby Sky and son Maxel Hardy debuted by celebrating with him in the ring.

The title was vacated the next day as EC3 filed an (storyline) injunction against the company (due to Jeff’s interference) to keep Matt from appearing on future episodes. On January 12th, Jeff returned after recovering from injury and challenged EC3 to a World title match, but EC3 refused as he believed Jeff had not earned it.

On January 19th, Matt won the title from EC3 on an episode of Impact after an unexpected double turn. EC3 became face and went off on his own, while Matt turned heel and acquired the services of EC3’s former employees Tyrus (Brodus Clay) & Rockstar Spud. He also introduced wife Reby Sky as his manager. His image changed to a typical “sell-out” champion, hiding behind his entourage and wearing expensive suits while claiming to be “Iconic”. 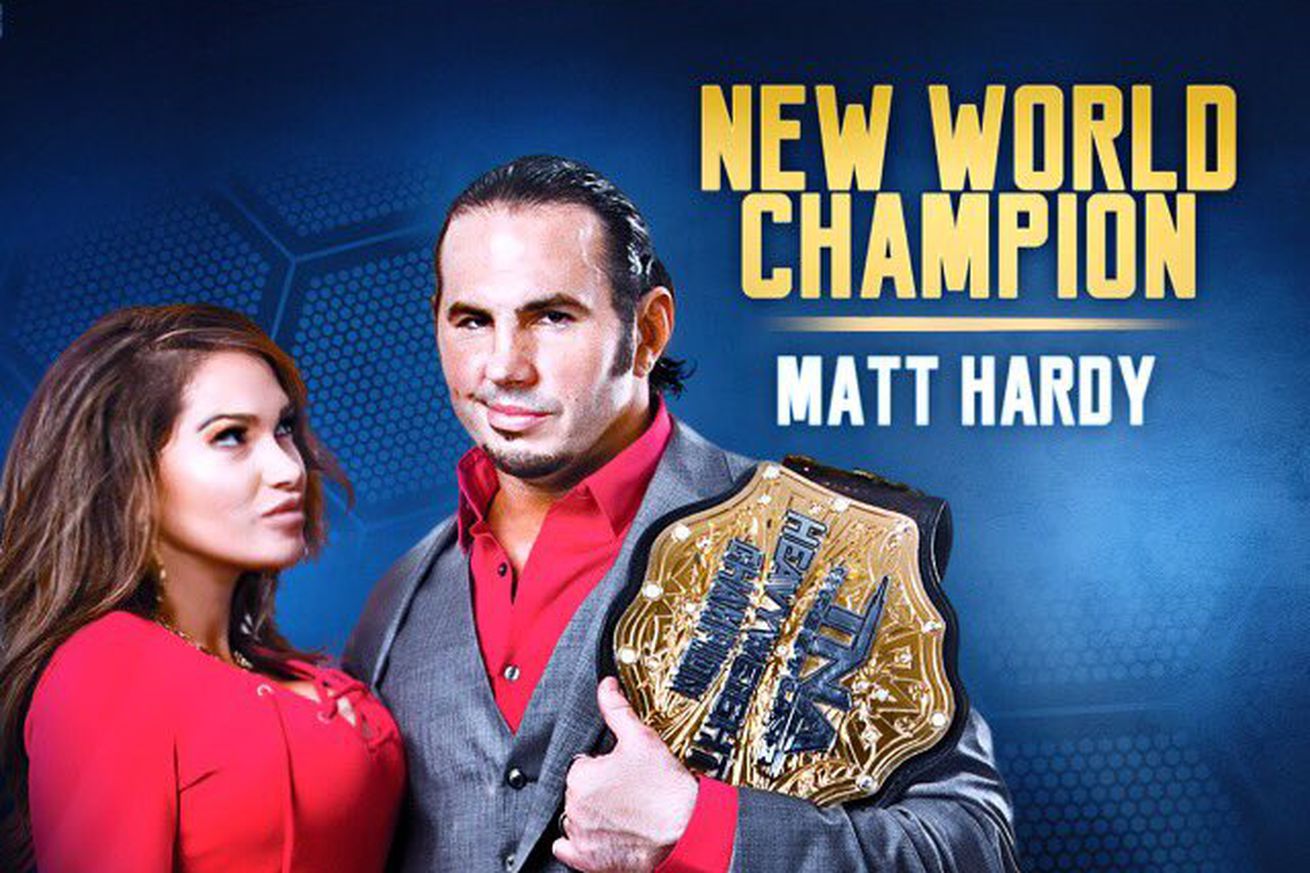 Jeff did not appreciate Matt’s new attitude, so he challenged him for the World title on January 26th, but their match didn’t get started as he was attacked by Eric Young and Bram. Jeff was sidelined again while Matt continued his “Iconic” dominance over Impact Wrestling. Jeff returned in March to challenge his brother, as they fought in a triple threat match with former champion EC3. Matt retained .. however, Drew Galloway cashed in his TNA World title briefcase and claimed his first World Heavyweight Championship.

Matt tried winning it back two weeks later but was unsuccessful. Matt blamed the losses on his brother, as their feud ignited with him wanting to end his Jeff’s career. And in April .. the “Broken Universe” began. Below is a video showing the end of the I Quit match which sent Matt down the “Broken” path.

In the coming weeks the character changed dramatically, with Matt losing parts of his dark look, instead being more zombified (or brain-damaged .. or on drugs) with a distorted British accent. He began referring to Jeff as “Brother Nero”, obsessed with “DELETING” him from existence. His entrance music changed to a piano melody. After Tyrus and Rockstar Spud confronted him over their jobs .. he let them know what he thought.

And everything escalated from there. Despite playing the heel in his feud with Brother Nero, the fans got behind Matt when he signaled to “Delete!”. Rockstar Spud and Tyrus lost a ladder match (and their jobs) against Jeff, giving Brother Nero the choice of stipulation for their match at Slammiversary. Jeff challenged Matt to Full Metal Mayhem (AKA TLC), but he had to go through a lot of crazy things before then. In the buildup Broken Matt introduced The Hardy Compound, his gardener Señor Benjamin (Reby’s real Father), and a drone called Vanguard 1; with the sole purpose of protecting the Hardy Compound.

The most noticeable thing about these segments is how they were produced; it’s terribly done by design. The encounter they had in the ring ended with Reby throwing a baby doll (which Jeff was to assume was Maxel) to Brother Nero, giving Matt the opportunity to deliver the Side Effect through .. what can only be described as an ancient table.

I’ll admit .. I wasn’t behind it. I thought it was one of the stupidest things I’ve ever seen in all the time I’ve watched wrestling; I complimented ’em for trying something different, but I’ve seen B-movies with better camera work. Also yeah .. a drone? Using a baby doll to imitate Maxel for heat? Jeff’s acting? It was bad, and still is .. but they had to start somewhere. Brother Nero defeated his broken brother at Slammiversary .. but the feud wasn’t over by a mile. After Jeff won Full Metal Mayhem Broken Matt became more obsessed with deleting him. A couple of weeks later, Broken Matt challenged Jeff to a final battle (AKA “The Final Deletion”) with the Hardy brand on the line. Deletion Intensifies!

What came next was the first special match to take place at the Hardy Compound on Impact Wrestling broadcasts. It was different, silly, dangerous, wacky, cheesy, and unexpectedly delivered on all the hype. They weren’t lying when they said you wouldn’t see anything like it anywhere else. Post-match reaction was mixed, with some claiming Matt’s gimmick was a success (and the only reason to watch TNA) .. while others complained over bad production, how dangerous it was (the fireworks), and how the company had ruined The Hardy Boyz. You can watch The Final Deletion in all its Wonderful(!) glory in the video below.

I wanted to make this mini-series of articles in two parts, but to do it justice I need to include (at least) one more entry. How did Jeff deal with the fallout of losing the Hardy name? When did Broken Matt turn in to an anti-hero? How did Reby Sky, Maxel Hardy, Vanguard 1 and Señor Benjamin contribute? And ultimately .. who emerged to threaten the existence of the Broken Universe? Would it be rendered .. Obsolete? Find out next time .. where I’ll do my best to explain this crazy world fans eagerly await to see in WWE. Thanks for reading! And you have my permission to Delete yourselves.