Hello! And welcome back to the Royal Rumble series. Moving on to the seventh Royal Rumble, and if you missed the others here’s the ever growing list of links: 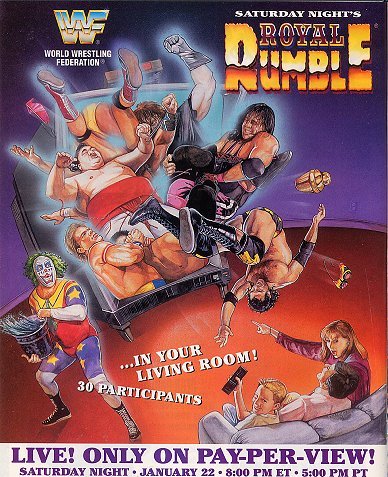 
With an attendance of 14,500, the seventh Royal Rumble featured four matches on the undercard, with the Rumble as the main event. Tatanka defeated Bam Bam Bigelow in the opening match. The Quebecers defended their tag team titles against Bret & Owen Hart. Razor Ramon continued to rise in popularity, as he made light work of IRS. Yokozuna defended his title against The Undertaker, in a memorable casket match which saw The Undertaker “die” (the casket exploded); but it was just storyline to write him off TV to recover from injury.

For the second time in history, the Royal Rumble promised the reward of #1 contender to the winner; and they would go on to Wrestlemania to challenge for the WWF World Heavyweight Championship. As Yokozuna left the event as champion, the winner of Rumble #7 would meet him in the main event of Wrestlemania. The commentary team consisted of Vince McMahon and Ted DiBiase. Monsoon and Jim Ross were with the promotion, but they were made to do commentary for Radio WWF instead.

Scott Steiner in first, and Samu followed. Rick Steiner as third, taking his sweet time to help his brother from elimination. Samu dived at the Steiners and missed, getting his neck stuck in the ropes .. dangerous. Oh god, it’s Kwang AKA Savio Vega. A determined Owen Hart came out and targeted a visually impaired Rick. Owen eliminated Rick pretty easily, making me wonder if Rick was too injured to continue. Bart Gunn joined the fray.

Diesel! Looking ready to make easy money. This is Kevin Nash’s break on a big show as the Diesel character (only done House Shows before), and he doesn’t disappoint. He goes on a rampage and eliminates Bart Gunn, Scott Steiner, Owen Hart, and Kwang in quick succession, leaving him alone in the ring for the next man .. Bob Backlund. After forty seconds Big Daddy Cool dumped Backlund to the outside, leaving him on his own again. Billy Gunn .. well we know this ain’t going to end well. Yep, he was in the ring for 14 seconds. Virgil next (replacing Kamala) .. and only managed 32 seconds. Ohhh! Macho Man! Just so you know, this is the last Rumble Randy Savage competed in.

Double J (Jeff Jarret) came out and stopped Macho Man from eliminating Diesel. Not the smartest move Jeff! He almost eliminated Savage, who got back in and bumped JJ in to Diesel, before launching him over the top rope. Crush out, and he and Savage are in an intense feud. Yay it’s Doink! While he made his entrance .. Crush eliminated Savage! Wow. Doink stood in the corner and laughed. He squirted water at Diesel and Crush, stomped on Diesel’s foot, and thumbed Crush’s eye. His antics caught up to him, as Diesel and Crush teamed up. BAM BAM! Diesel & Crush sat on the ropes, inviting Bam in to deal with Doink (which he did, easily). Crush & Diesel failed to get Bam out. Mabel entered, so the ring  filled up with four heavyweights. Thurman Plugg AKA Hardcore Holly (replacing 1-2-3 kid) out next.

Shawn Michaels! Business is picking up. He shakes the hand of Diesel, before the others decide to gang up on the big man. Michaels doesn’t help at all, as the other four guys eliminate Diesel! *Vince said Michaels helped eliminate .. but the camera angle makes it hard to see* – The fans applauded Diesel’s efforts. Mo out next, to give support to Mabel. Greg Valentine again .. and it would be his last Rumble before going back to WCW. Tatanka gets in, and they forget to pan to him on the way down. The man considered to be the first to use “The Mist” on his opponents, The Great Kabuki, entered and went after Mabel. The rest came to help, and after taking out Mo, seven men collaborated to lift the 500 pounder over the top.

Here comes Lex Luger! And the crowd goes nuts. He gets rid of Kabuki first, just because he’s close to Yokozuna. Tenryu is ready to go for a second year in a row. 3 .. 2 .. 1 .. BUZZ! Nothing. Vince assumes it must’ve been Bret Hart, who is unable to make it out due to getting attacked earlier. Not true though .. it was for Bastion Booger, who was pulled from the event because “he wasn’t feeling good”. Rick Martel out. At #27, Bret Hart limped to the ring. A lot of guys in the ring now. Fatu out. After 25 minutes of action, Crush was finally eliminated by four guys. Oh it’s Marty Jannetty! And predictably, he and Michaels found each other right away.

Ok, I got annoyed as it cut away from the awesome scrap between Michaels and Jannetty to get a freakin’ interview with Crush. He can’t count, as he claimed it took six guys to take him out. Savage appeared outta’ nowhere to destroy Crush for eliminating him earlier. On first viewing .. I must admit, I fell asleep around this time. Watch out! It’s Adam Bomb! He’s #30. Don’t shoot me if I’m wrong, but this might be the most amount of guys left (13) in the ring after the last entrant (at least from the events I’ve covered so far)? Thurman Plugg out shortly after by the odd couple of Bret Hart & HBK. Both Luger and Hart come close to being eliminated. If it was nowadays, Luger, Bret, and HBK would have eliminated most of these guys by now.

After a continued determination to eliminate each other, Martel got the better of Valentine. Martel out afterwards as well, thanks to Tatanka. Luger ducked Adam Bomb’s attack, sending him over the top. Mo out by Fatu, and Tatanka by Bigelow. Bam Bam made a mistake and got eliminated by Luger. Michaels got the better of his former team mate, eliminating Jannetty. Luger and Bret teamed up to get rid of Yokozuna’s hired gun Tenryu. Down to four .. Luger, Bret, HBK, and a young Rikishi. Michaels doesn’t like Bret, so he leaped across the ring at him. Quite the cool spot with Luger whipping Fatu to the middle while Bret whipped Shawn, dodging each other to go after the other, only for Fatu & HBK to be thrown out. Just Luger and Bret remaining! The crowd perks up.

They wrestled til they both fell over the top, with both their feet hitting the floor. Controversy struck, with referees trying to decide who the winner was. Finkel announced Luger as the winner, but Hebner got in his face and told him it was wrong. Then he announced Bret as the winner. WWF President Jack Tunney came to the ring to clear it up. They watched replays, and it was eventually announced that Bret and Luger’s feet hit the floor together, so they were declared co-winners. It is the only time in history the Rumble has had co-winners.

They stuffed it with too many nobodies. Parts of it were good (like Diesel’s dominance), but the crowd wanted to see a clear winner between Bret and Luger. They didn’t get that, and it didn’t make much difference. Instead of a triple threat, Yokozuna had to defend his title in two separate singles matches at Wrestlemania. Bret and Luger’s deflated looks tell the story of Rumble ’94. Cutting away from the match to show a backstage fight? Tells me that the Rumble isn’t as important as seeing Macho Man beat up Crush. I don’t buy that .. it could’ve waited for Raw.

There’s a good reason I fell asleep on the first viewing .. it dragged on. I guess it was different to have almost half the participants left in the ring by the 30th entrant, but many were guys nobody cared about anyways. It highlights the WWF’s struggle to keep stars away from WCW, as well as building new stars to replace them in the mid-90s. It’s starting to look more like the 90’s, but the cartoony gimmicks remain. I don’t want to sound too harsh on the match, the guys did a good job. It wasn’t terrible, but I believe the absence of a few big stars, plus Savage and Nash going out too soon, made it difficult to care for long periods. I’m looking forward to the next one though .. as we edge closer to the Attitude Era. As always, thanks for reading! >>> Wrestlemania X